By Paula Wilson on January 5, 2014 in Articles › Entertainment

The old adage, "never judge a book by its cover", was never more true than in the case of Griselda Blanco.  Outwardly, this unassuming woman was the quintessential Colombian grandmother, with her dimpled chin and wide smile.  On the inside, however, she was the mastermind behind the one of the world's most successful and deadly cocaine empires. At her peak of power, Griselda was a ruthless businesswoman that some defined as sociopathic. She also was rumored to have amassed a fortune north of $2 billion. Her life has been the subject of multiple books, documentaries, and movies, and more projects are in the works.  How did a girl from the slums of Medellin come to rule the international drug trade?  The story of her rise will leave you more blown away than premium-grade blow.

Griselda Blanco was born in Cartagena, Colombia on February 15, 1943.  She grew up in Medellin, and the city would later become the seat of her drug stronghold.  Medellin has long been a crime capital, and Griselda exhibited a predilection for her home city's career path of choice very early on.  One of Griselda's childhood friends was none other than fellow future cocaine kingpin Pablo Escobar.

When she was just eleven years old, Griselda kidnapped, and attempted to ransom, the child of a wealthy couple from a neighborhood near her slum.  When her ransom demands were unsuccessful, she shot killed him  Griselda must have decided she needed to downsize, as she then turned from kidnapping and murder to petty thievery, making ends meet by pickpocketing.  Her home life was far from ideal and her mother was quite abusive.  She ran away from home and ended up working as a prostitute until she was in her early 20s.  Blanco subsequently married Carlos Trujillo, and gave birth to three sons, Dixon, Uber, and Osvaldo.  They would later become integral to her drug empire.

Griselda began to make a name for herself in the drug trade during her adult years in Medellin, and earned a reputation for being violent, ruthless, and shrewd in all business dealings.  She married again in the 70s, and relocated to the United States with her new husband, Alberto Bravo.  It was while in living in New York, that she laid the groundwork for an incredibly profitable US drug trade operation.  She was the first Colombian drug lord to operate successfully in the US, and through most of the 70s, she ruled the US cocaine trade.  Griselda was indicted on drug conspiracy charges in 1975, and her bust was the biggest cocaine case in history to that point.  She, and 30 of the men and women who worked for her, were sentenced, but she fled back to Colombia before her prison time could begin.  She subsequently returned to Miami, where she set up an even more powerful cocaine network, seeming to have learned from the mistakes she made while in New York.  Anyone who defied her, or attempted to move in on her territory was shot, tortured, kidnapped, or some combination of all three.  Family members were fair game, and she quickly eliminated or intimidated the competition.  No one was safe, not even her husband, Alberto.  She shot him at close range in a parking lot, and wiped out his six bodyguards for good measure.

At the peak of her drug empire, Griselda Blanco's net worth peaked at $2 billion.

Miami had long been a marijuana stronghold, and as her cocaine business grew more powerful, marijuana dealers and distributors began to lose business.  Drug-related violence became commonplace in Miami throughout the late 70s and early 80s, as what became known as the "Cocaine Cowboy Wars", raged throughout the city.  Extreme violence was committed in broad daylight, including a submachine gun fight in Dadeland Mall in the middle of the day in 1979.  She was long thought to be responsible for the deadly gunfight that proved fatal for multiple mall-goers, but she was never tried in connection with the incident.  Griselda patrolled her turf using "Motorcycle Assassins", pairs of underlings who would drive by intended victims and spray them, and anyone unlucky enough to be standing near them, with bullets, and then drive away. 25% of all murders in Miami at the time were from automatic machine gun fire. The Miami-Dade coroner's office became so overrun with bodies that it was forced to rent refrigerated mobile vans.

During this time, she also gave birth to a fourth son, Michael Corleone Blanco.  The father of her son kidnapped him, and returned to Colombia.  She proceeded to have the man assassinated and brought her son back to Miami.  Her ruthlessness finally began to catch up with her.  She made enemies by the hour, and by the mid-80s, Griselda was forced to relocate to California to escape the number of Miami-based dealers who were out for her life. 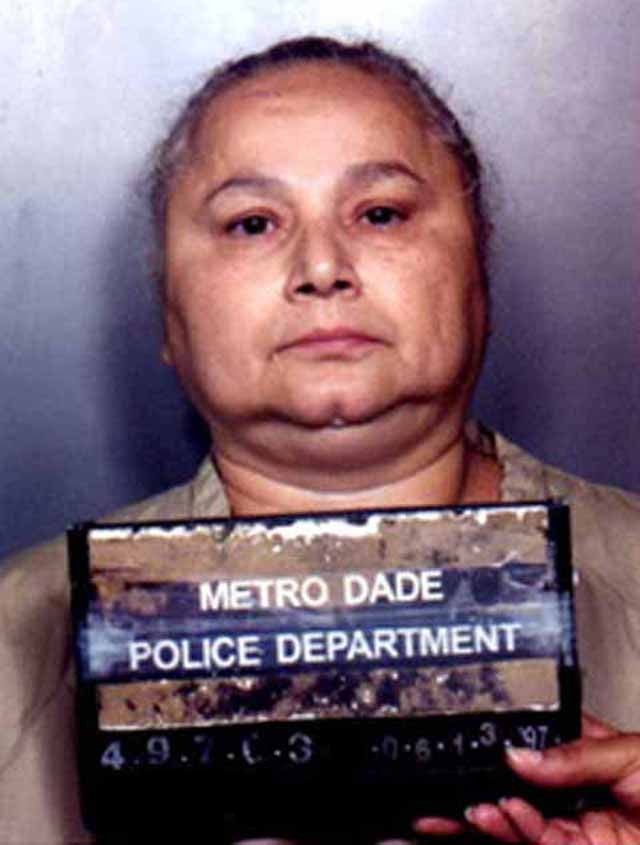 Once in California, her life of crime finally caught up.  Blanco was arrested by the DEA on February 20, 1985, and sentenced to 10 years in prison.  While in jail, she continued to operate her drug empire, using inmates and guards who were loyal to her (or scared of her), to maintain her trade routes and wealth.  In an attempt to shorten her sentence, she agreed to mastermind a plan to kidnap John F. Kennedy, Jr.  The plan fell through when her then-lover told the FBI what was going to happen.  She was finally put on trial for three murders in Miami – the only murders of nearly 240 that could be definitively linked to her.  However, the case was dismissed when it turned out the star witness had engaged in phone sex with secretaries and members of the prosecution team from the Miami-Dade State Attorney's office.  The case was moved to an Orlando court, but she cut a plea deal in 1998 that commuted her sentence to three concurrent 20-year sentences.  She'd only been in jail for a few years when she was released from prison and deported to Colombia.

Once back in Colombia, she reportedly settled down.  According to her remaining family members, Griselda chose to focus on real estate development in her later years.  Her only remaining son, Michael Corleone Blanco, followed in his mother's footsteps.  As of 2012, he was being tried on cocaine trafficking and conspiracy charges.  Her other three sons had all been killed in drug-related violence.  On September 3, 2012, Griselda herself was gunned down outside of a butcher shop in Medellin. She was leaving the shop with her pregnant daughter-in-law at 3 o'clock in the afternoon.  In a textbook motorcycle assassination, two motorcyclists drove by, shot her in the head twice, and kept driving.  She was 69 years old.  The woman who broke all the rules, took no prisoners, and proved that outward appearances can be deceiving, died as a prime example of another adage – "live by the sword, die by the sword".