How Fred DeLuca Turned A $1,000 Loan Into A $2.6 Billion Subway Sandwich Fortune (And Why The Company Is Struggling Today)

There are 43,945 Subway sandwich shops in 110 countries, making it one of the world's most recognizable restaurants. There are more Subway sandwich shops in the U.S. than Starbucks and McDonald's combined. Subway is the home of the $5 foot long, "sandwich artists," and Jared Fogle, who turns 37 this year! (Jared, by the way, has earned a nice little $15 million fortune thanks to his Subway gig.) And while it's true that the chain has experienced unprecedented worldwide success and growth over the last 25 years, all is not well at the half-century mark with Subway or its founder, Fred DeLuca, whose net worth currently stands at $2.6 billion. Below we will explore the fascinating rise and recent fall of Subway…

Subway founder Fred DeLuca was born in Brooklyn, New York in 1948. He is an alumnus of the University of Bridgeport. In 1965, DeLuca borrowed $1,000 from his friend Peter Buck with the plan to make money for college by opening a "fast food venture that provided a healthier, less fattening bill of fare." The first shop opened on August 28, 1965 in Bridgeport, Connecticut. Originally called Pete's Submarines, DeLuca changed the name to "Pete's Subway" when he realized that the original name sounded like Pizza Marines. The second restaurant opened in 1966 and in 1968, the name was shortened to Subway. 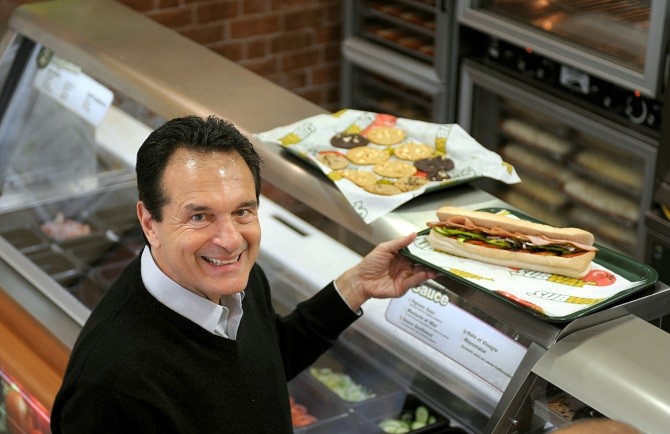 In 2013, Subway was opening 50 new stores per week. Today they serve nearly 2,800 sandwiches every minute and are still wholly and privately owned by the holding company set up by DeLuca and Buck, Doctor's Associates. DeLuca maintains the company's growth through an ever-present aggressive expansion strategy. Just last year, he said that Subway wanted to add 8,000 new American franchises to the already existing 27,000.

Subway is the largest single-brand restaurant chain and the largest restaurant operator in the world. However, last year, Subway's U.S. sales declined by $400 million, or three percent, faster than any other of America's top 25 food chains. Also, for the first time in seven years, Subway fell to the third best-selling food chain. So what's going on???

Over the past few decades, Subway grew by appealing to the tastes of American's who had grown tired of fast food and were seeking a healthier alternative at the same fast food price. However, fast growing rivals of Subway including Chipotle are beating the sandwich shop at the game it invented.

Chipotle, Firehouse Subs, and other newer, fresher competitors are appealing to an American palate that has evolved. Customers want to know that their meat has been cut fresh, not peeled off plastic. They still want fast and cheap, but they also want different. Subway has endured for so long because it hasn't changed much—however, that is what is causing its decline as well. What Americans perceive as healthy has evolved. Subway has not.

Ironically, while Subway was born to give customers a healthier alternative to places like McDonald's, their current struggle isn't all that dissimilar from McDonald's. However, the Golden Arches still hold an advantage. While the average Subway shop sold $437,000 worth of sandwiches and soda last year (the smallest amount in five years), the typical McDonald's franchise pulls in $2.4 million per store.

Fifteen years after Jared Fogle hit the airwaves talking about how he lost a ton of weight by eating only Subway, the chain struggles to maintain its relevance. Even with trendier toppings like hummus—the chain is just not being perceived as the healthiest alternative, especially when even McDonald's is offering black bean burgers and kale on their menus.

Could that be because of the yoga mat chemicals in their bread? In 2014, controversial blogger FoodBabe.com, Vani Hari launched a campaign against Subway for using the additive azodicarbonamide in its bread. While it is true that it is an ingredient in yoga mats, it is also approved by the Food and Drug Administration as a food additive. Nonetheless, Subway caved to the pressure and vowed to remove it from its bread, branding it a "bread improvement effort."

While 2014 saw the first down turn for the chain in nearly a decade, it also marked a year when its founder Fred DeLuca was not involved in the company. In July 2013, DeLuca announced that he was undergoing treatment for leukemia and he spent a year away from Subway.

A few months after DeLuca returned to the company following his treatment for leukemia, it was announced that he is handing more leadership and responsibility to his younger sister, Suzanne Greco. She has been with Subway since her older brother founded it. She was one of the original sandwich artists. Whether DeLuca or Greco is at the helm of Subway, one thing is for sure; it has some work to do to fend off upstart sandwich chains like Jimmy Johns and Jersey Mike's.