Who Is Rihanna's Billionaire Boyfriend, And Is She Pregnant?!

By Amy Lamare on February 2, 2018 in Articles › Entertainment

Rihanna has been the subject of speculation since Sunday's Grammy Awards. She took her boyfriend, billionaire Hassan Jameel, to a Grammy after party and was unusually covered up, clothing wise. Is she adhering to a more conservative style of dress to please her Arab boyfriend? (She might want to have a chat with Janet Jackson about that.) Or is she pregnant? Or was she simply chilly? After all the Grammy Awards moved from balmy Los Angeles to frigid New York City this year! Inquiring minds want to know!

Hassan's family is the 12th-wealthiest Arab family in the world, and he has a personal net worth of $1.9 billion. He is heir to, and vice chairman of, his family's business, Abdul Latif Jameel, one of the biggest investors in Toyota.  The family owns the rights to sell Toyota cars in Saudi Arabia. The family business is a Middle Eastern company with interests in not just Toyota, but also real estate, financial services, environmental services, consumer products, and advertising. Jameel also has the sponsorship of and naming rights to the entire Saudi premier league, which is known as the Abdul Latif Jameel League. 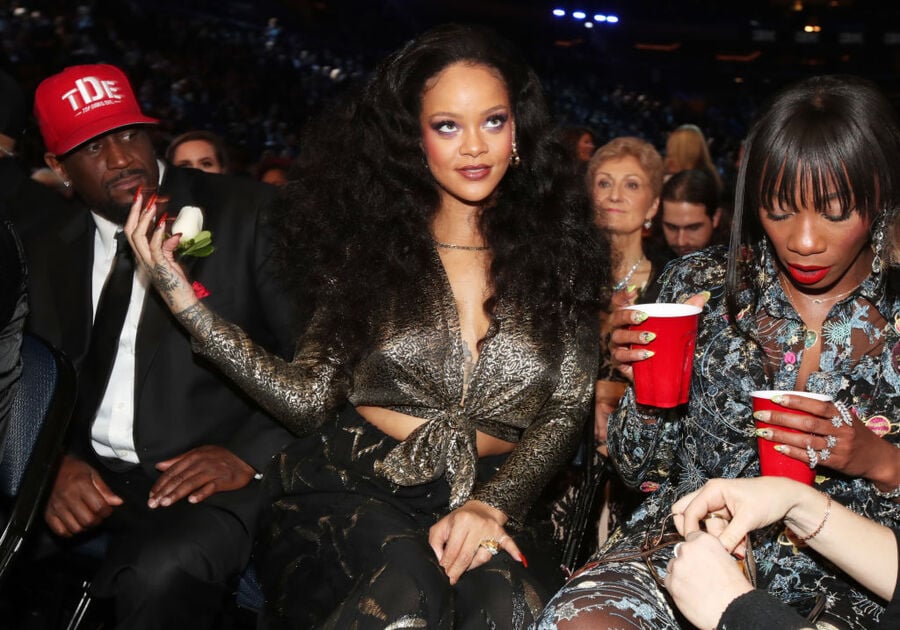 Hassan has been married before. In 2010, he married art dealer Lina Lazaar in an extravagant ceremony at the Paris Opera House. He got divorced before beginning his relationship with Rihanna sometime last spring or summer. Prior to Rihanna, he dated model Naomi Campbell.

So, the billion-dollar question is, is Rihanna pregnant or not? At the Grammy's she strutted her stuff on stage in a pink dress and silver heels. However, later that night she was spotted leaving an after party wearing a silver jumpsuit and black cape. She had a protective hand over her stomach, as pregnant women often do. Rumors have been swirling about the contents (or lack thereof) of the Bahamian singer's womb and she has done nothing to dispel them. The only thing she has said is that she has a "fluctuating body type."

She said: "I actually have had the pleasure of a fluctuating body type, where one day I can literally fit into something that is bodycon, and then the next day — the next week — I need something oversized; I need a little crop here and a high-waist there to hide that part, you know?"

Oh girl, I feel you on that!

As for whether or not Rihanna and Jameel are expecting a little one—time will tell. Let the gal have her privacy on this people!