The Richest Wrestlers in the World

By Brian Warner on February 28, 2014 in Articles › Entertainment

Who are the richest wrestlers in the world? For anyone whose parents say you'll never make any money learning to take a folding chair to the face, immediately show them this list. Over the last 30 years, Vince McMahon has turned the WWE, formerly WWF, into one of most popular and profitable sports companies in the world. In the process McMahon has made dozens of wrestlers extremely rich. He also earned himself an astonishing personal fortune. Today, WWE Raw and SmackDown are consistently some of the top ten most viewed shows on cable television, attracting between four and six million viewers each week. WrestleMania XXVIII aired on April 1st 2012 and was the highest grossing event in the company's history with nearly $70 million in pay per view revenues. But who are the richest wrestlers in the world? Which WWE stars are body slamming into a bed of cash every night? Scroll down for the full list of the richest wrestlers in the world… 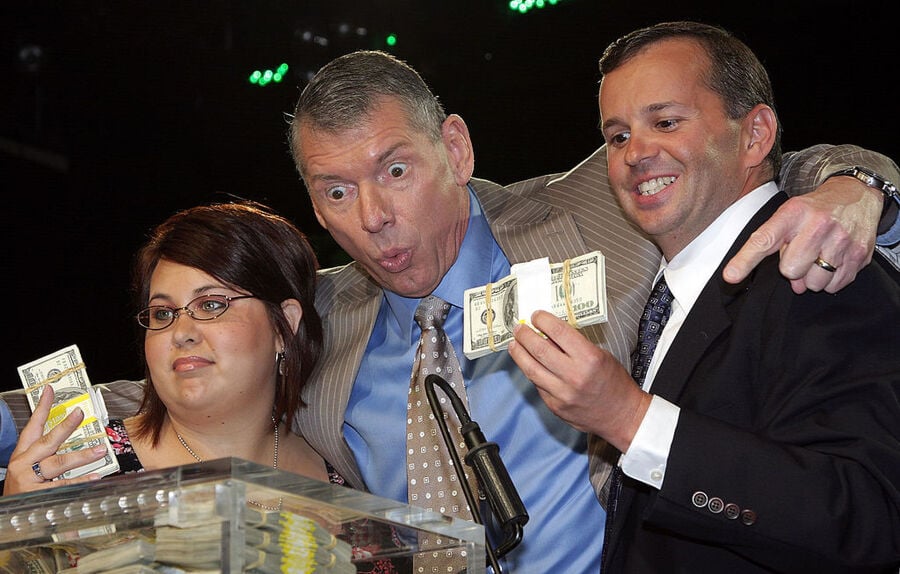 ***The figures contained in this list were acquired from all publicly available information including salaries, real estate holdings, divorces, record sales, royalties and endorsements. The final net worths come from a formula that takes out taxes, manager's fees, agents' fees, and lifestyle.***

The Richest Wrestlers in the World:

It should come as no surprise that Dwayne "The Rock" Johnson is the richest wrestler in the world with a net worth of $124 million! The Rock has transformed himself into a bona fide Hollywood action star with dozens of blockbusters under his belt including Fast Five and The Scorpion King. He is an active philanthropist who has donated millions of dollars to charity. The Rock shows no signs of slowing down, but will he hold this title forever???

Stone Cold Steve Austin is by far one of the most famous wrestlers ever to come out of the WWE and with a net worth of $50 million, he is the second richest. Austin has parlayed wrestling into an acting career that most action stars would kill for. Including roles in The Expendables alongside Sylvester Stallone and Arnold Schwarzenegger. But who is the #1 richest wrestler???

John Cena is the third richest wrestler in the world with a net worth of $45 million. Cena is one of the most famous wrestling personalities in the world today thanks to appearances in several mainstream movies such as The Marine. Cena has endorsement deals with several large brands such as Subway, Gillette and Gold's Gym. He's even released a rap album which went platinum, selling over 1.4 million copies.

Triple H is a 23-time WWE champion who has also happens to be married to Vince McMahon's daughter Stephanie. Triple H's net worth of $40 million is enough to make him the fifth richest wrestler in the world but many believe he is heir to the WWE throne which would automatically fast track him to #1 in a few years.

In addition to having a very successful wrestling career, The Big Show has appeared in over a dozen television shows and high profile films such as The Waterboy with Adam Sandler. The Big Show's $30 million net worth makes him the fourth richest wrestler in the world.

Before becoming a professional wrestler, Kurt Angle won a gold medal at the 1996 Olympic games, another gold at the 1995 world championship and more. Angle has won championships in several different leagues including WWE, TNA and the IWGP. He has also acted in many television shows and movies.

Before becoming a professional wrestler, Kurt Angle won a gold medal at the 1996 Olympic games, another gold at the 1995 world championship and more. Angle has won championships in several different leagues including WWE, TNA and the IWGP. He has also acted in many television shows and movies.

Chris Jericho's superstar twenty year wrestling career has made him one of the most mainstream famous athletes the sport has ever produced. His $18 million net worth makes him the seventh richest wrestler in the world. Jericho appeared on Dancing with the Stars where he lasted for six weeks. He has appeared in several films and television shows and has released two New York Times bestselling books.

Shawn Michaels is the 8th richest wrestler in the world in a net worth of $17 million. Shawn Michaels' career spans nearly 30 years, through multiple retirements and comebacks. Today he serves as an ambassador to the WWE.

During his 20+ year career in wrestling, The Undertaker has proven himself as one of the biggest draws in the WWE. Outside of wrestling, he and a business partner own a real estate investment firm and actively raise money for various causes especially relating to animals.

***Hogan lost an estimated $25 million in his divorce from ex-wife Linda Hogan. Linda was awarded 70% of the couple's liquid assets, a 40% stake in all of Hulk's companies, six luxury cars and millions more in property***

The WWE is a publicly traded company with a current market cap of $650 million and Vince McMahon owns a majority of the outstanding shares. His net worth has peaked as high as $1.1 billion but today sits at $500 million. McMahon owns a $40 million mansion in Greenwich Connecticut, a $12 million New York City apartment and a nearly 50 foot yacht named "Sexy Bitch".