The Richest MMA Fighters In The World – 2013

By Brian Warner on November 15, 2013 in Articles › Entertainment

Twenty years ago this week, the very first official UFC event was broadcast live from McNichols Sports Arena in Denver, Colorado. The date was November 12, 1993 and 86,000 people around the country ordered UFC 1 through Pay Per View, while 2800 people attended the event live. The winner of UFC 1, Royce Gracie, had to beat three different opponents over three rounds in order to be crowned champion. His reward for winning UFC 1? $50,000. Not bad for a single night's work, but fast forward twenty years and you'll see just how far along the UFC has come. For example, on October 19, 2013, 17,000 people showed up to the Toyota Center in Houston to watch UFC 166 live, while more than 330,000 paid $50 to watch on Pay Per View. And relatively speaking, those numbers were fairly average compared to other UFC fights. The biggest Pay Per View UFC event of all time happened on July 11, 2009 when 1.6 million people tuned in to watch Brock Lesnar TKO Frank Mir at UFC 100: 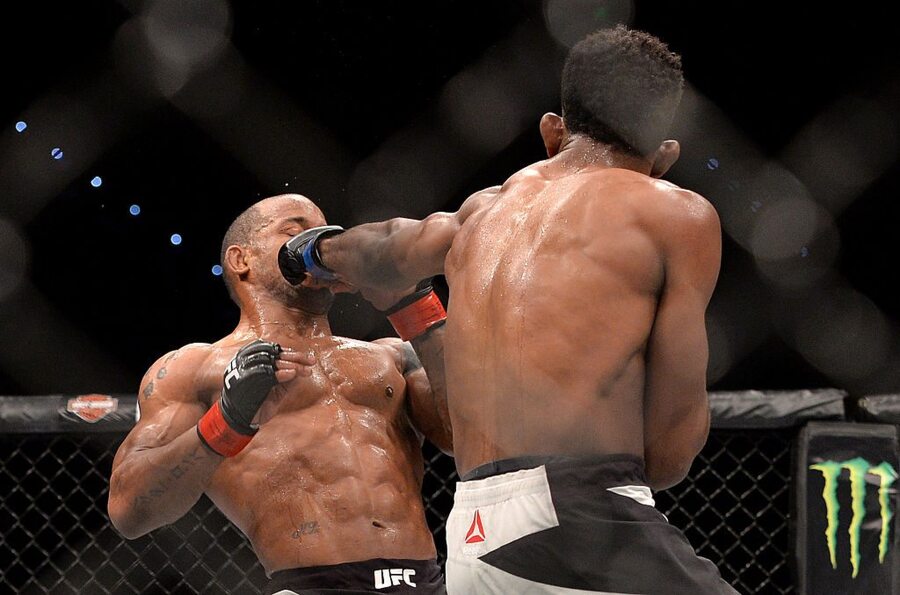 And as the UFC's Pay Per View numbers have grown, so has the prize money. Big time. Nowadays, it's not unusual for a top fighter to earn $400,000 in prize money alone for a single fight. Top draws will typically command $200,000 just to show up plus an additional $200,000 win bonus (assuming they win). The largest prize money payout of all time went to Chuck Liddell, when he took home $500,000 from UFC 115. But as you probably know, prize money is just the tip of the financial iceberg for the upper echelon of UFC fighters like Georges St-Pierre, Anderson Silva, Jon Bones Jones, Chael Sonnen and more. These top fighters make much much more money off the Pay Per View sales of their events. To understand just how much these fighters can earn off PPV sales, we can actually look at Randy Couture's final UFC contract. For Randy's final match this is how his cut of Pay Per View sales broke down:

Let's use that model as a comp to determine roughly how much Georges St-Pierre earned for UFC 158 back in March 2013. It's known that GSP earned $200,000 to show up plus a $200,000 win bonus for total prize money of $400,000. UFC 158 was purchased by 950,000 people. Using the math above, GSP potentially took home a PPV bonus of $2.85 million. That works out to a grand total of $3.25 million for a single night's work. As an example of how lucrative a successful fighter career can be, in January 2013, UFC President Dana White announced that Quinton "Rampage" Jackson earned $15.2 million in UFC prize money and PPV bonuses alone during his time with the organization. And we haven't even talked about sponsorship yet.

As the UFC has exploded in popularity, some of the largest corporations in the world have poured tens of millions into sponsoring individual fighters. In 2011, Anderson Silva became the first UFC fighter to sign with Nike. On July 7, 2012, Silva earned a cool $500,000 in one night for wearing a Burger King logo on his shorts at UFC 148.

It has been reported that on top of the roughly $3 million in prize money and PPV bonuses, Georges St-Pierre earns an additional $2-3 million per fight from endorsements. For a total per fight of $5-6 million. Speaking of George St-Pierre, on November 16, 2013, GSP takes on Johny Hendricks at UFC 167. So keep in mind that while most of us sit at home drinking beer and eating pizza, Georges St-Pierre will be making millions and millions of dollars and then probably banging our girlfriends. Now you can start to understand how in just a few years, Georges St-Pierre has skyrocketed up the ranks of the richest MMA fighters in the world. From less than a million in net worth a few years ago, to much much more today. How much? Keep scrolling to view a full ranking of the 40 richest MMA fighters in the world as of November 15, 2013: