By Brian Warner on March 21, 2014 in Articles › Entertainment

Warning! If you are fan of luxury sports cars, this story will make you extremely angry/sad. Before you keep reading, be warned that this article contains some graphic photos of a $1.6 million Ferrari Enzo that some rich jerk left abandoned for 20 months in a dusty Dubai parking lot. Read on to find out the whole story…

Ferrari only produced 399 Ferrari Enzos which have a top speed of 217 miles per hour and can go from zero to 60 in 3.14 seconds. The starting base price was initially $670,000 and each original buyer was hand picked by Ferari.

How a Ferrari Enzo Should Be Treated: 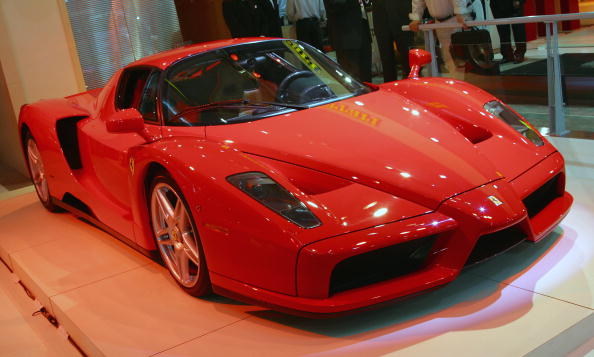 In order to be one of the original owners you needed to own at least two other Ferraris and be well known by the company for at least 10 years. Unfortunately, after the world economic downtown that started in 2008, a bunch of Enzos started going up for sale to and the standards of ownership were greatly reduced. That explains how an anonymous British citizen living in Dubai was able to purchase one of these rare masterpieces.

Apparently the expat who bought the Enzo had a very heavy foot and rarely observed parking signs. He somehow managed to wrack up $30,000 in traffic violations and parking tickets. But I know what you're thinking, surely $30k is pocket change for someone who can afford a $1.6 million Ferrari, right? Well, turns out the money wasn't the reason the owner abandoned his Enzo in a blistering hot and dusty Dubai parking lot for 20 months. He did it to avoid GOING TO JAIL! In Dubai, unpaid debt to the government is considered a serious crime that is often punished with a jail sentence.

In order to avoid doing hard time (in what we can only imagine is a disgusting hell hole of a prison) this rich guy parked his Ferrari in a random lot then skipped town. His current whereabouts are unknown but the Ferrari sat gathering dust (and more tickets) in temperatures that frequently top 100 degrees for 20 months! He was recently placed on an Interpol wanted list for Arab expats and faces even more jail time and penalties. The Enzo is now going to be auctioned by the government of Dubai along with 22 other cars that have either been abandoned or seized. What would you have done? Pay the fines, do the time and keep your Enzo? Or skip town and live on the lam from Interpol?