While Red Bull Was Giving You Wings, It Was Giving Dietrich Mateschitz An $8 Billion Fortune

By Amy Lamare on December 29, 2013 in Articles › Entertainment

What's the first thing that comes to mind when you think Red Bull? Death defying extreme sport stunts? Waking up with a pounding heart after drinking a few too many Red Bull and Vodkas at a bar? Formula One racing? The Red Bull Flugtag? Or perhaps the company's famous catch phrase "Red Bull gives you wiiiiiiiiiings!"? Odds are if you asked pretty much anyone in the developed world today, he or she would instantly know Red Bull and might have even consumed one of the famous energy drinks in the last couple days (or hours). 25 years after being launched by Austrian entrepreneur Dietrich Mateschitz, today Red Bull is one of the most successful beverage companies in the world. In 2012, Red Bull sold more than 5.2 billion cans in 165 countries to generate roughly $6.5 billion in revenue. Perhaps most remarkably, the company wasn't launched by one of the preeminent beverage conglomerates (Coke or Pepsi) with an unlimited marketing and research budget. On the contrary, Dietrich Mateschitz had the idea to create Red Bull in order to cure his jet lag after a business trip to Thailand in 1982. Today he is the richest person in Austria with a personal net worth of $8.1 billion! This is the story of how Red Bull gave us wings and gave Dietrich a massive fortune.

Dietrich Mateschitz was born on May 20th 1944 in Sankt Marein im Murztal, Styria, Austria to a Croatian family. Both of his parents were elementary school teachers and they separated when Dietrich was very young. Mateschitz wasn't the most expedient of students, or perhaps he just really enjoyed his time in college, as it took him a decade to graduate from Vienna University of Economics and Business Administration. He finally graduated with a marketing degree in 1972. During college, he worked as a ski instructor in order to pay for his extended time getting his bachelor's degree.

Mateschtiz's first job after college was at Unilever, where he was responsible for marketing various brands of detergents. From there he moved on to the German cosmetics company Blendax (now a part of Procter & Gamble), where he worked on the marketing of the brand's toothpaste. It was during his time at Blendax that Dietrich would have a life changing experience. In 1982, Dietrich traveled to Thailand on a business trip for Blendax. On this trip, Dietrich was constantly dogged by jet leg. He couldn't stay awake during important meetings and couldn't fall asleep at a reasonable hour at night. At some point during this trip, Dietrich complained about his jet lag to a bartender at the hotel bar where he was staying. What happened next would eventually change Dietrich's life and set him on the path to becoming a multi-billionaire (I hope he tipped the bartender well!). 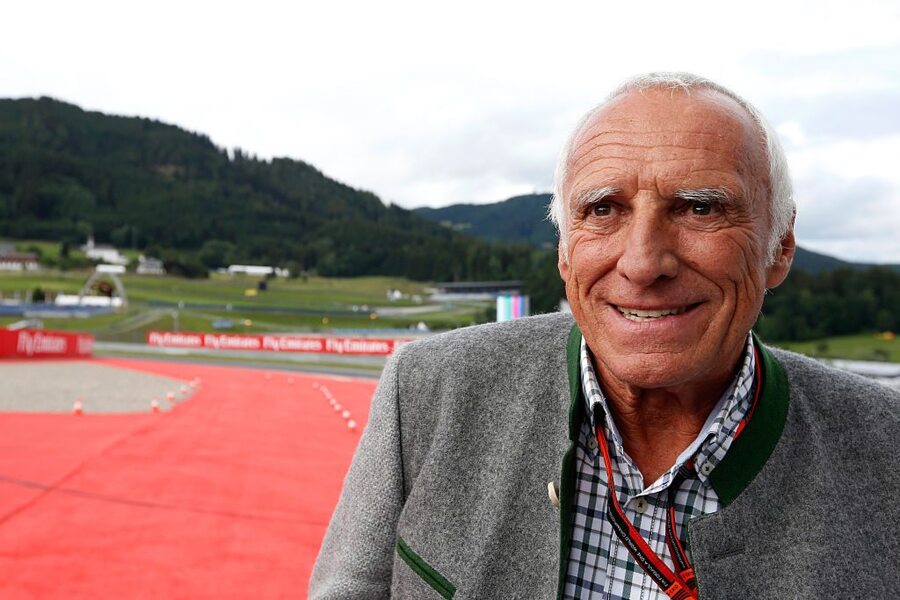 Instead of pouring Dietrich a coffee, the hotel bartender offered the jet lagged Austrian a drink called Krating Daeng. Krating Daeng, first introduced in Thailand in 1976, is a sweet, non-carbonated energy drink that was sold mostly in Southeast Asia. The drinks is made from water, cane sugar, caffeine, taurine, inositol, and B vitamins. At the time, the drink was seen as something lower class laborers drank to stay awake. The primary consumer was farmers, construction workers, and long distance truck drivers who had to stay awake during long shifts or after getting very little sleep.

After having his first few sips of Krating Daeng Dietrich instantly felt more energized and awake. His marketing brain also instantly began to fire on all cylinders. What was this drink made out of? Who owned it? Could it be re-worked for more western taste buds? Recognizing the potential opportunity by Krating Daeng, Dietrich canceled the rest of his Blendax meetings and set out to find the drinks owners.

Soon Dietrich discovered the drink's creator and owner was a self-made Thai billionaire named Chaleo Yoovidhya. After arranging a meeting, Dietrich convinced Chaleo that with a more westernized flavor and marketing budget, they could be onto something really big. Mateschitz and Yoovidhya each invested $500,000 in the new company. They split the company 49/49 with the remaining 2% going to Chaleo Yoovidhya's. Working with a company called T.C. Pharmaceuticals, the newly named "Red Bull" was launched to Austrian consumers in 1987. Within five years the drink had grown into a moderately popular regional beverage. It was especially popular in countries like Hungry and Slovenia.

At some point in the late 90s, Red Bull found its worldwide tipping point. And once again, Dietrich owed his success to a bartender. When Red Bull entered the European markets in the late 90s, it was not an instant success. Consumers thought the cans looked cool but your average British bar patron on a Friday night was much more likely to order a beer than a non-alcoholic "energy drink". This all changed when some long-forgotten brilliant bartender created a simple drink: Red Bull and Vodka. As the popularity of Red Bull and Vodka spread across Europe so did an interesting rumor. People all over Europe began to hear stories about drinking Red Bull and Vodka supposedly produced the same chemical brain reaction as doing a line of cocaine.

As much as brand would probably prefer to not be associated with hardcore drug use, this viral rumor soon helped Red Bull and Vodka become the most popular drink at bars and clubs all around Europe. If you happened to have visited a bar or club in any European town right around 1999, you might recall seeing the back of every bar decorated with hundreds of Red Bull cans. It was the ubiquitous bar decoration everywhere you went. Red Bull entered the American market place in 1997 where it experienced a nearly identical explosion in popularity. By 2003, both Dietrich Mateschitz and Chaleo Yoovidhya had both earned more than a billion in wealth from the drink (remember, Chaleo was already a billionaire before the company launched).

Over the years, Red Bull expanded worldwide and in doing so, became known for their marketing stunts. Today Red Bull spends an extraordinary amount on sponsorships for extreme sports and event marketing stunts such as Felix Baumgartner's supersonic jump. These public relations events help push the brand's worldwide awareness and association with all things extreme and adrenaline pumping. An airplane stunt team called the Flying Bulls was founded in 1999 in Salzburg, Austria, an addition to Red Bull's Formula One team and other extreme sports. Red Bull's Formula One team, by the way, won three back-to-back-to-back world titles under the Red Bull banner.

Mateschitz's personal dividend outside of salary and other perks in 2012 was $97 million. Interestingly enough, for all of Red Bull's investment in and promotion of extreme sports, by and large Mateschitz's largest personal expense in 2012 was his $92 million donation to fund research on spinal injuries. Though he has a son, Dietrich Mateschitz has never been married. He lives in Salzburg, but also owns Laucala Island off Fiji, which he bought for $7 million from the Forbes family. In 2013 he bought a $1.7 million DeepFlight Super Falcon submarine for his Island guests to enjoy.

When Chaleo Yoovidhya died in March 2012, his $8 billion stake passed to his family. Later that same year, one of Chaleo's grandsons, Vorayuth Yoovidhya, was arrested in Bangkok after allegedly killing a police officer with his Ferrari in a hit and run accident. Vorayuth Yoovidhya was driving a silver Ferrari when he crashed into a motorcycle cop. Instead of stopping to help, Vorayuth kept driving until he reached his family's luxury compound. In the process he dragged the officer's body more than 200 meters. He now faces a possible 10 year jail sentence.

On a brighter note, today Red Bull is absolutely thriving. In 2013, Red Bull was available in roughly 165 countries. More than five billion cans were consumed around the world. Dietrich Mateschitz is the richest person in Austria with a bank account topping $8 billion. And to think, none of this would have existed without a little bit of jet lag and a lucky bartender. I seriously hope that bartender got a huge tip eventually. Or at least a free supply of Red Bull for life! The lesson of Dietrich's life is simple: We all need to just keep our eyes open for new opportunities that are right under our noses and might give us wings!