The Rarest And Most Valuable Comic Book Of All Time Just Went Up For Auction. It Is Expected To Shatter Records…

By Brian Warner on August 18, 2014 in Articles › Entertainment

Anyone who was alive on April 18, 1938 could have walked down to their local news stand and picked up a copy of a brand new comic book series called "Action Comics". More specicially, you could have picked up the first copy of Action Comics, which today is appropriately referred to as "Action Comics #1". On the cover you would have seen brand new character by the name of "Superman". This "Superman" was depicted wearing a tight blue costume with a red cape while he magically lifted a car above his head. The "Superman" chapter was actually just the first 13 pages in the 65 page comic book.

If you were alive in April 1938, how much would Action Comics #1 have set you back? 10 cents. That's equal to roughly $1.70 today after adjusting for inflation. And if you happened to have kept that comic in your attic for the last 76 years, how much would it be worth today? MILLIONS. If you don't believe me, pay attention to what happens on eBay over the next 6 days… 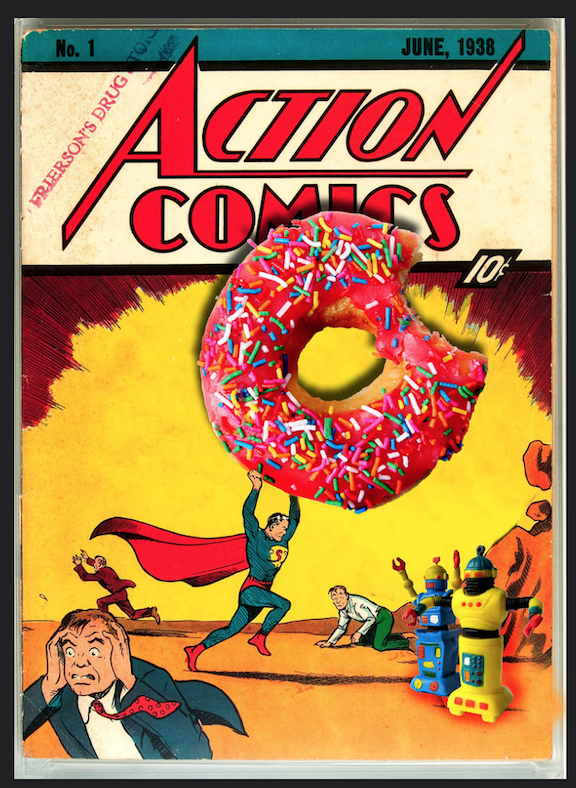 The Superman character was created in 1933 by two high school students from Cleveland, Ohio named Jerry Siegel and Joe Shuster. Jerry was the writer, Joe was the artist. After creating the character, Joe and Jerry shopped their idea for a comic strip about a caped superhero who protected civilians to every newspaper in the country. They were rejected across the board. Finally, at some point in early 1938, the duo managed to convince National Allied Publications to include Superman in an upcoming series called "Action Comics".

National Allied Publications (the corporate predecessor of what is known today as DC Comics) printed 200,000 copies of the original Action Comics #1. The exact date of the first publish was April 18, 1938 but the comics came printed with the date of "June 1938". To everyone's amazement, the Superman character was a smash hit around the country. Thanks mainly to Superman, the first run of 200,000 sold out within a week. At its peak, Action Comics #1 sold over 1 million copies a month for several months straight. For their work, Joe Shuster and Jerry Siegel were paid $10 per page that Superman appeared on. That worked out to $130 split two ways.

Despite the fact that millions of copies were printed in that first year, today there are only 50-100 copies of Action Comics #1 in known existence. And out of these 50-100, many are badly damaged from 76 years of wear and tear. Only a very small percentage are actually in high quality condition, as measured by the Comic Guarantee LLC (CGC) rating scale. The CGC scale rates comics from 0 to 10, with the highest grades denoting a copy that is in mint or near mint condition.

Avid comic book collector (and greatest actor of our generation) Nicolas Cage bought a near-pristine copy of Action Comics #1 in 1997 for $150,000. Cage's copy was believed to be one of the five highest quality copies in known existence. Unfortunately, one day Nick was walking through his house and noticed that the frame which had previously held the treasure… was empty. According to Nick, the frame may have been empty for as long as a week without being noticed. Heartbroken, Nick filed an insurance claim and was subsequently paid an unknown settlement.

Fast forward more than 10 years and an unsuspecting storage hunter had the surprise of a lifetime. In April 2011, a man purchased the contents of an abandoned storage locker in the San Fernando Valley area of Los Angeles. As he examined the contents of his find, the storage hunter came across Nicolas Cage's long lost copy of Action Comics #1. Because the item was determined to have been stolen, the comic book was returned to Cage. Cage was then required to return the insurance settlement money he had received more than a decade earlier.

Unfortunately, at the time Nick's copy was returned, the actor was going through a bit of a financial pinch due to years of insane overspending. The downside? Nick was forced put his copy up for sale in November 2011. The upside? It eventually sold for $2.16 million. It was the first comic to break the $2 million mark and currently the most expensive comic book ever sold. There is now a screenplay and movie in the works about this whole saga tentatively titled "Action No. 1". And if there is a God, Nick Cage will be playing himself.

In order to maintain the highest quality of a comic (or paper in general), the ideal storage conditions are 1) away from light, 2) low temperatures 3) dry climate and 4) exposed to as little air as possible. The copy that was put on eBay this week was purchased in 1938 then stored until the late 1970s in perfect conditions, totally by accident. The owner stored his copy in the top drawer of a cedar desk in a high altitude area of West Virginia which happened to produce all four conditions needed for ideal storage.

The comic was discovered after this man saw an ad in the newspaper from someone who was interested in buying comic books. When the buyer showed up and browsed through the collection, he was absolutely stunned to find a mint condition "Action Comics #1" at the very bottom of the pile. After coming to a price which is not known today, the collector then proceeded to hold on to the comic for the next 30 years until he sold it to professional collector Darren Adams who is the man behind today's auction.

As we previously mentioned, Nick Cage's copy that sold for $2.16 million in 2011 is believed to be one of the highest quality copies on the planet. The copy that went up on eBay earlier this week is believed to be the highest quality copy in the world with a CGC grading of 9.0. The opening bid was $1 million dollars. As of this writing, there have been a total 21 bids and the current winning bid is $1,750,200. There are six days and seven hours left to go in the auction. A portion of the auction's proceeds will go to benefit the Christopher and Dana Reeve Foundation.

Update! With just 5 hours to go in the auction, the record has been broken! After 39 bids, the current winning bid is $2.3 million!

Update! With 4 minutes to go the highest bid is $2.4 million.