A Mysterious Penny Stock CEO Has Suddenly Become A Multi-Billionaire After Share Price Increases 25,000% In A Week. This Story Is Insane.

By Brian Warner on July 9, 2014 in Articles › Entertainment

Over the last couple days, something very strange (and totally insane) has been going on with a penny stock company called CYNK Technology. CYNK is a self-described social media technology firm whose main business seems to be a website called introbiz.com. Introbiz.com claims to help people "buy and sell the ability to socially connect to individuals such as celebrities, business owners, and talented IT professionals." In other words, the company supposedly helps ordinary people connect with celebrities and business tycoons, for a price. We say supposedly because, as far as anyone can tell, CYNK doesn't actually do anything at all. It's either lost money or earned no money at all every year since it started releasing financial reports. This is why the story you are about to hear is absolutely crazy. Like, next-level-bonkers bat-shit insane. 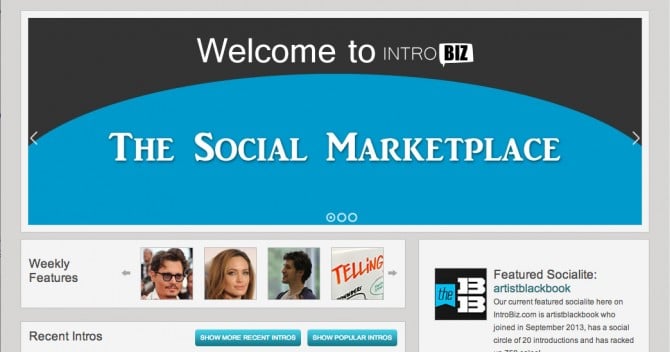 For the last couple years, CYNK has traded shares of company stock "over-the-counter" (OTC). That means its shares do not qualify to be traded on a high profile exchange like the NASDAQ or NYSE. OTC stocks typically trade at very low prices because the companies are too small to meet the larger exchanges' basic listing requirements. Also unlike stocks on larger exchanges, OTC stocks do not need to provide the same level of financial reporting that a company like Google or Coca-Cola needs to prepare every quarter. CYNK gives addresses in both the country of Belize and the state of Nevada as its corporate headquarters. A quick search on Yahoo Finance shows that in the years 2011 through 2013, CYNK reported absolutely no revenue. It actually lost $1.5 million dollars in 2013.

With financial results like that, it's hard to believe the stock traded on any public market at all, even over-the-counter. And as you might guess, for the last several years the stock was pretty pathetic. Shares never topped 36 cents and for the most part, hovered between 10 and 13 cents. On average, for the past couple years, roughly 200-500 shares of the stock were traded back and forth OTC. With 292 million total shares outstanding, at a price per share of 10 cents CYNK as a whole was worth $29 million dollars. And let's be honest, even a market cap of $29 million sounds absolutely ludicrous for such a seemingly worthless company.

So if a market cap of $29 million sounds absolutely ludicrous, you must agree that $100 million would be completely bonkers. $500 million would be utterly unimaginable. And $1 billion would have to be some sort of sign of the apocalypse. Right? Well, based on what you are about to read, you might want to start preparing for the four horseman…

And then today all sanity truly disappeared. At its peak of trading today, July 9th, CYNK's share price hit $14.7. At that level, the company had a market cap of $4.3 billion. For some comparison, at that market cap CYNK is worth roughly the same amount as publicly traded tech companies Pandora, GoPro, Yelp, and Groupon. At that market cap, CYNK was worth more than Jet Blue, JC Penny and even the New York Times. Also, instead of trading a few hundred shares back and forth as per usual, today CYNK traded 132,000 shares. In just the last few weeks alone, CYNK's market value has increased an astonishing 25,000%. For comparison, between the day Microsoft went public in 1987 and today, its stock price has increased roughly 10,000%. Apple has increased 18,000% since going public. Also, please keep in mind that by most reasonable accounts, CYNK is essentially a pile of utter garbage. 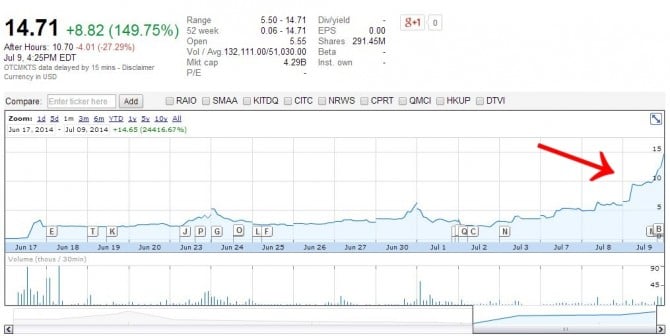 UPDATE! It's July 10th at 10:00am and CYNK is still exploding! Overnight the stock gave back some gains in after market trading, but this morning everything went crazy again. As of this writing, CYNK is trading up 30% at $19.20 per share. At one point the stock topped $21 a share. At today's levels, CYNK's market cap hit an all time peak of $6.1 billion dollars!

But wait, it gets crazier. As we mentioned previously, the company has 292 million total shares outstanding. Of those, roughly 210 million are owned by one person: Marlon Luis Sanchez. According to the company's most recent SEC filing, Marlon Luis Sanchez is the company's ONLY EMPLOYEE! Sanchez is the self-described President, CEO, Secretary, Treasurer, CAO CFO and CTO of CYNK Technology Corp. Last October when the company was trading at a more reasonable 10 cents per share, Sanchez's 210 million share stake was worth $21 million dollars. At July 10th's stock price of $21, his 210 million shares were worth a mind boggling $4.4 BILLION dollars! What is going on!!!??

The craziest part of this whole story might be the fact that no one has any idea what is causing CYNK's recent insanity. The company's only listed phone number is out of order. No one can get a hold of newly-minted multi-billionaire Marlon Luis Sanchez. The only real information anyone can pin down about Sanchez is that he is a graduate of San Diego State University. And while he may be a paper multi-billionaire today, surely something untoward had to occur for this to happen. At the very least, now that the story is starting to get attention in the news, the next few days should be very very interesting. We'll keep you posted on any new developments or explanations!

UPDATE! It's July 11th at 8:00 am EST and the Securities and Exchange Commission (SEC) has just halted all trading of CYNK. The SEC ordered that the halt last until midnight on July 24. That basically gives everyone a two week timeout to see what the heck has been going on. Here is the statement from the SEC:

"The Commission temporarily suspended trading in the securities of CYNK because of concerns regarding the accuracy and adequacy of information in the marketplace and potentially manipulative transactions in CYNK's common stock."

So now we have two weeks to uncover what caused this absolutely insane rally. Surely something illegal is going on. Hopefully no one ends up getting hurt too badly. And if people do get hurt, maybe it's a lesson for why you shouldn't buy the stock of an imaginary company…