Rags to Riches – Duck Commander's 4th Season May Be On Hold

By Alex Chan on April 8, 2013 in Articles › Entertainment

For most of us, "QUACK", is just the sound of a duck nearby. For the Robertson family, it is the sweet sound of success. When people meet Phil Robertson for the first time, they see a stone cold redneck. They certainly wouldn't think he was the founder of a multi-million-dollar family business, that revolves around duck calls! Pretty amazing isn't it? I must say that Phil Robertson and his family are one unique of "the American dream"!!!

The tradition of making hand-made duck calls began with Phil Robertson, over 25 years ago. Back then he started making these unique handcrafted tools and earned around $8,000 a year. 25 years later, this developed into a successful business, selling all kinds of duck hunting equipment and gadgets, with millions of fans all over America.

Duck Commander, Inc. was established in 1998 as a company for selling sporting goods. What may have started as a small company for hand-made duck call, grew into an empire later on. Recently due to their massive success on reality TV, Duck Commander has launched a huge variety of products like: t-shirts, hunting equipment, key chains, DVDs and CDs, cooking sauces, coolers, gift cards, specially designed hunting caps, air fresheners and so much more. This fast growing popularity of the company is believed to bring the Robertsons an estimated $2,200,000 a year.

However money doesn't flow just from one direction for this American family. Their reality show "Duck Dynasty" is also climbing the popularity scale fast as the third season is reaching its end. Rumors say that the cast is asking for a whopping $200,000 an episode for the upcoming fourth season, with a possibility of future salary raise.

Willie Robertson, one of Phil's four sons, is the CEO of the company. Together with his wife Korie Robertson they have an estimated net worth of around $10 million. The other three, Alan, Jese and Jep, work alongside their brother in the company and together are worth an amazing $15 million.

One must say that the Robertsons are "keeping it" in the family! 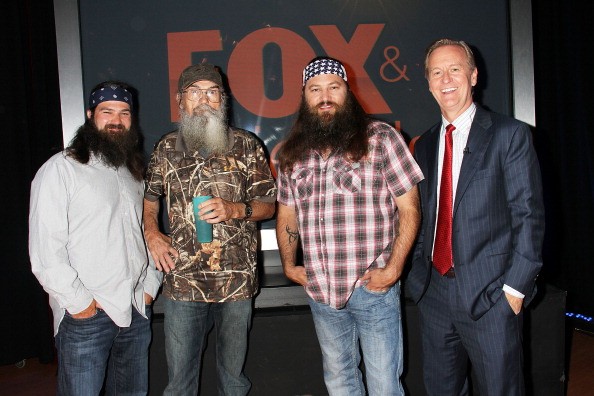 Other cast and crew from "Duck Dynasty" and Duck Commander: