Rags to riches? Growing Up Sheldon Adelson Was So Poor His Family Couldn't Even Afford Rags. He Just Died The Biggest Casino Tycoon On The Planet

By Amy Lamare on January 12, 2021 in Articles › Entertainment

Sheldon Adelson might be the best example of the American Dream of all time. You've heard the term "rags to riches"? Sheldon famously scoffed at that description because his family couldn't even afford rags. He grew up in a poor neighborhood in Boston, in a two-room flat sleeping on the floor. His father was an immigrant taxi driver. As a child, Adelson worked as a paperboy to help support his struggling family. After dropping out of college, he earned minimum wage as a court reporter before joining the army. After the army he proceeded to launch 50 different businesses and career attempts, including stints selling magazine ads, windshield de-icers and as a door-to-door toiletry salesman. Sheldon died yesterday at the age of 87. At the time of his death he owned the largest casino empire on the planet with massive resorts spanning to globe, from Las Vegas to Macau.

At the time of his death Sheldon Adelson's net worth was $40 billion. At times he was one of the 15 richest people in the world. He was by far the richest person in Las Vegas and Nevada, overall.

How exactly did Sheldon Adelson transform himself from a poor paperboy to one of the richest people on the planet? Losing nearly his entire fortune then recovering, not once BUT TWICE… You're about to find out… 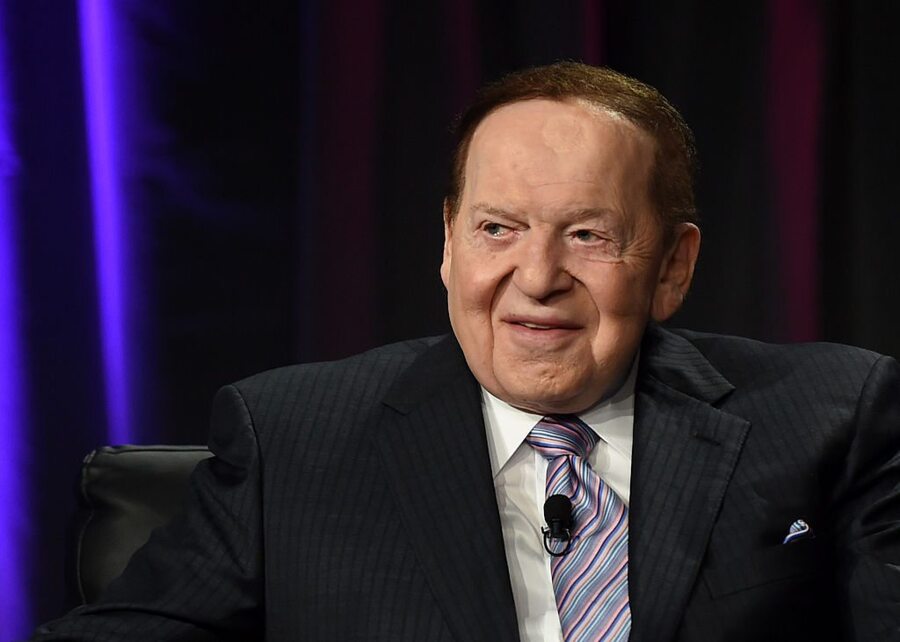 Sheldon Adelson was born on August 4, 1933 in the Dorchester area of Boston. His father was an immigrant from Lithuania who drove a taxi. His mother worked in a knitting shop. Adelson's dad, who only had a sixth-grade education, eventually ran a trade publication for taxi drivers.

Adelson's first job, like many American kids, was a paper route. By the time he was 12-years old, this budding entrepreneur already owned his own business selling toiletries.

In the 1950s, Adelson attended the City College of New York, majoring in corporate finance, but dropped out after less than two years. After dropping out of college, he briefly attended a trade school that helped him get a job as a court reporter. He then joined the Army. When his obligations with the Army were over, Sheldon took a job as a mortgage broker and investment advisor. In the early 1960s, he took the money he made on Wall Street and moved back to Boston where he shrewdly invested in a number of businesses.

By the time Sheldon reached the age of 35 in 1968, he managed to build up a personal fortune of roughly $5 million ($33 million in today's dollars). Unfortunately, thanks to a few failed business ventures and a declining stock market, Sheldon lost his entire fortune. TWICE. Thankfully, these temporary setbacks did not slow him down.

In the early 1970s, Sheldon jumped on the trend of converting apartment buildings into condominiums in Boston. He did very well for a while, but then the condo market took a dive. At this point, Adelson was adrift and depressed. The drastic ups and downs of his fortunes were taking a serious toll mentally and physically. But, despite these setbacks, Sheldon was still actively on the hunt for the next big thing. In an effort to find a more stable income stream, he soon bought a company that published magazines. One of those magazines was a computer publication called "Data Communications User".

One day, while attending a trade show for his condo business, Sheldon had a life changing epiphany:

If the computer industry was big enough to necessitate its own devoted magazine, could it also benefit from a trade show of its very own?

Decades later, that would turn out to be a $40 billion dollar epiphany. 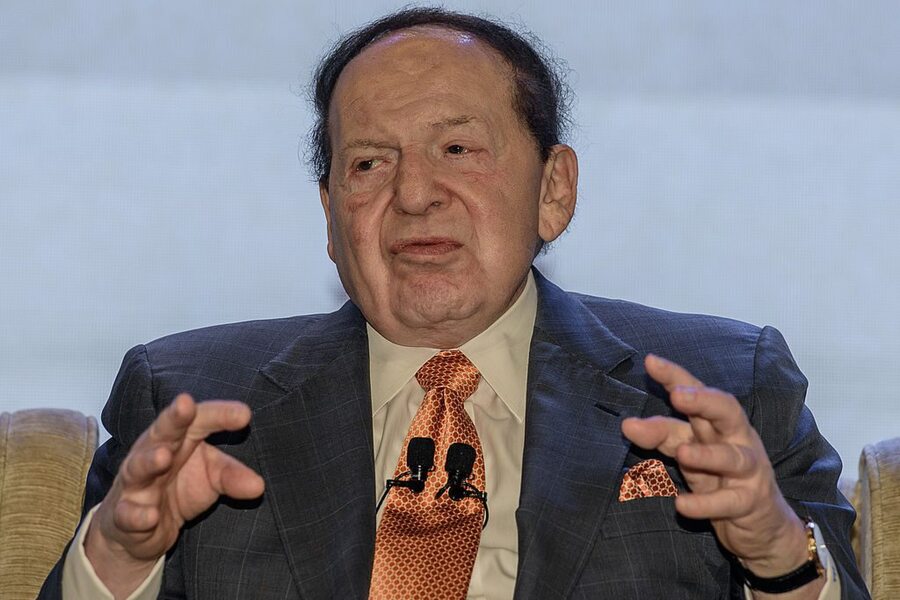 In 1973, Sheldon and some partners put together what was likely the world's first computer related trade show. Even though the event was just a modest, Sheldon was convinced that both computers and trade shows were the future. Adelson quickly liquidated his entire condo business and publishing company, to dive full speed into the trade show business.

In 1979, Adelson launched what would become his golden ticket: The Computer Dealers Expo (COMDEX) which was held at the MGM Grand Hotel in Las Vegas. The timing was perfect. Not only was public interest in personal computers beginning to take off, but itself Las Vegas was starting to become known as the go-to destination for a fun and debaucherous weekend. In other words, it wasn't all that hard to lure a bunch of computer enthusiasts to spend the weekend partying in Las Vegas for "work". At this period in time, IBM, Apple, and Microsoft were starting their rapid growth, and Adelson gave them a crucial early forum to showcase their products to both consumers and companies. Over the next decade, COMDEX grew into a behemoth for the computer industry. Comdex quickly became largest trade show in Las Vegas, grossing $20 million per year for Sheldon ($40 million in today's dollars).

By the late 80s, as COMDEX was printing money. The trade show had become so enormous, Adelson wanted to host it in his own event space (rather than renting from others). Adelson began looking for a hotel property to buy in Las Vegas.

In 1988, Adelson and his partners bought the legendary Sands Hotel and Casino, (the former hangout of Frank Sinatra and the Rat Pack) for $128 million. Adelson redeveloped the property, adding a shopping mall (they were not ubiquitous in Casinos back then), and eventually a convention center which soon became host the annual COMDEX trade show.

During a 1991 trip to Italy, Adelson found himself enchanted with the canals and architecture of Venice. He soon began dreaming of a giant hotel-casino-resort modeled after Venice on the Las Vegas Strip.

In 1995, Adelson sold COMDEX for $862 million. His personal windfall from the sale was $500 million. With a half billion dollars in the bank and a $1.5 billion line of credit, Sheldon shed his partnerships and various other business interests and set out to build the Venetian Resort Hotel and Casino. He demolished the Sands Hotel and built his dream resort which opened in 1999. The entire resort was essentially built to attract business visitors. Every room was a suite. The casino floor had the same square-footage of TWO football fields. Everything screaming luxury.

The Venetian featured a massive attached convention center and was the first all-suites hotel in Las Vegas. As you probably could guess, The Venetian was an instant smash hit. Within a few years, Adelson and the Las Vegas Sands corp were operating six casinos around the world including a location in Macau which is one of the largest buildings in the world.

Adelson took Las Vegas Sands public in 2004 under the ticker LVS. The IPO made him a billionaire overnight, officially for the first time. Over the next 12 months, Sheldon's net worth grew by $1 million PER HOUR, every hour, including weekends, nights and holidays. Today, the Las Vegas Sands corp is the largest casino company in the world with annual revenues of more than $13 billion. Adelson remains the company's Chief Executive Officer and Chairman. Thanks largely to his 52.3% ownership stake in the company, Sheldon Adelson's personal net worth today is $40 billion.

But like most of Sheldon's business ventures, even the Las Vegas Sands corp has experienced its share of ups and downs. When the economy tanked in 2008, Las Vegas tourism was obliterated. The trade show industry was especially hard hit.

The low point was March of 2009 when the price of a single share of LVS stock hit an all time low of $1.70. Just 16 months earlier, LVS shares peaked at $140. That's a 98.8% drop in value. Adelson saw his wealth plunge from $30 billion to less than $2 billion. Things got so bad that the company came literally within an inch of being forced into bankruptcy. As a last resort, Adelson invested $1 billion of his own personal cash to help the company get through the financial crisis. The gamble worked and eventually LVS recovered.

Adelson was famously a Republican mega-donor late in life. Formerly a Democrat, Adelson became a Republican as his wealth grew. Specifically, he was annoyed with the higher tax rates he had to pay and the influence of the trade unions, which he frequently clashed with and who are a big part of the Las Vegas casino workforce. He backed George W. Bush's second presidential bid, Newt Gingrich and Mitt Romney, by contributing tens of millions of dollars to their campaigns, including a $20 million gift to Romney's super PAC. In 2004 Sheldon gave $92 million to campaigns and Super PACs that supported Republicans. In 2012, Sheldon announced he was willing to spend $100 million to prevent Barack Obama from having a second term. That cycle he and his wife donated $93 million to Republicans. Sheldon and Miriam gave $82.58 million to Republicans in 2016 and $123.25 million during the midterm elections in 2018. In the 2020 election cycle the Adelsons donated $173 million to Republicans. That made them the largest political donors in the world.

Regardless of your politics, Sheldon Adelson's success deserves our attention and respect. He was born into a poor family, dropped out of college, and lost large chunks of his fortune more than once due to unpredictable changes in the economy. By keeping his attention focused on the next big thing and never quitting, Adelson earned one of the largest fortunes on the planet. A true rags to riches American dream inspiration if there ever was one!