He Started Out Selling $10 Hats From A Street Corner. Today FUBU Founder Daymond John Is Worth $350 Million

By Amy Lamare on October 25, 2020 in Articles › Entertainment

Anyone who has ever watched the popular ABC show "Shark Tank", knows Daymond John as the extremely well dressed judge with a keen eye for potentially successful business ideas. Daymond John is also commonly known as the "Godfather of Urban Fashion" thanks to the company he founded in 1992, FUBU (For Us By Us). Daymond founded FUBU in order to sell $10 knock-off hats from a street corner in New York City. Six years later, the company generated more than $350 million in revenue. And along the way, Daymond John became one of the most highly sought after branding experts in the world with a personal net worth of $250 million. This is his very literal rags to riches story! 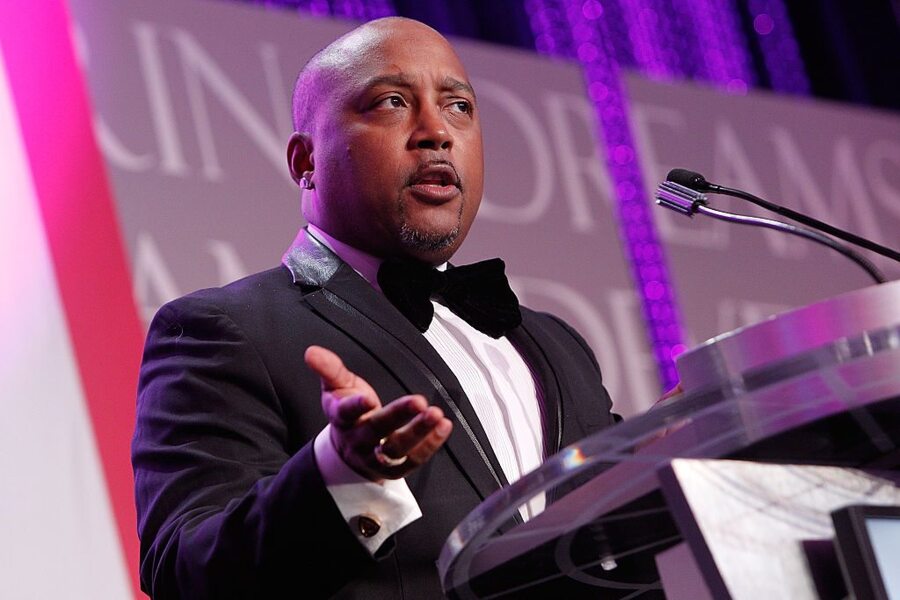 Daymond John was born in Brooklyn, New York on February 23, 1969 and grew up in the Hollis neighborhood of Queens. He is an only child and was raised by his single mother who worked for American Airlines as a flight attendant. Being a single mom trying to keep pace the New York area, Daymond's mom frequently had to work multiple jobs at once. The Hollis neighborhood of Queens is widely considered the birthplace of hip hop as we know it today. It is here where RUN DMC, Salt-N-Peppa, and L.L. Cool J. got their start. This exciting and burgeoning cultural scene had a heavy influence Daymond's life, style and mindset. He attended Bayside High School, where he participated in the school's co-op program, which allowed him to have a full-time job and attend school at the same time, alternating weeks for each. Daymond credits this early exposure to the work force with sparking his entrepreneurial spirit at such a young age.

Not surprisingly, Daymond's first foray into the fashion world was inspired by the world of hip-hop music. Back in the early 90s, "tie top hats" were an extremely popular accessory in hip-hop music videos. Wanting to fit in with the trend, Daymond went to his corner clothing store to purchase one for himself. Daymond was very turned off by the $20 price tag so he immediately returned home and asked his mom to show him how to use her sewing machine. After recruiting his friend next door, Carl Brown, Daymond was off and running in the hat business.

Daymond and Carl produced their knock-off version of the tie-top hat at night and sold them all day long from street corners around Queens, Brooklyn and Manhattan. Their price? $10. One day, after they sold $800 worth of hats, Daymond realized he might be onto something much bigger.

In 1992 Daymond recruited three neighborhood friends to launch FUBU. Daymond created the now iconic FUBU logo himself which was now emblazoned onto a fresh line of t-shirts, sweatshirts, and hockey jerseys. When he wasn't working on FUBU, Daymond held down a full-time job at Red Lobster.

As the business grew, Daymond's mother mortgaged her home in order to raise $100,000 in start-up funding for her son's new business. As if that wasn't generous enough, Daymond's mother also moved out of that house so that he and his partners could use the home as their corporate headquarters. The Queens house Daymond had grown up in became a factory, showroom and office space for the fledgling company.

In 1993 Daymond asked his old friend from the neighborhood, L.L. Cool, to wear one of his FUBU t-shirts in an ad campaign for the brand new clothing line. Later that year, LL Cool J wore a FUBU hat in a GAP commercial. He also rapped the brand's signature slogan "for us, by us" in one of his songs.

In 1994 Daymond John and his partners took FUBU to an industry trade show in Las Vegas. They could not afford a booth to officially participate in the show, however, buyers were drawn to the colorful, distinctively styled clothing, and Daymond left Las Vegas with $300,000 worth of orders. Soon after, FUBU landed a contract with Macy's and, as a result, FUBU expanded into denim and outerwear.

By 1998, FUBU generated $350 million in revenues. That was enough to match profit and revenue brought in at the time by designer brands Tommy Hilfiger and Donna Karan New York. Keep in mind, this was just six years after Daymond was selling $10 tie-top hats on the streets.

In 2007, Daymond John added became a bestselling author with the book "Display of Power: How FUBU Changed a World of Fashion, Branding, and Lifestyle". The book is an autobiography documenting John's rise from a Queens street corner to a fashion mogul. His book was named one of the best business books of the year by the Library Journal. His second book, The Brand Within, is about loyalty between customers and companies. In 2009, Daymond John joined the cast of the ABC show Shark Tank offering his advice, listening to pitches, and choosing whether or not to invest in the projects.

To date, FUBU has amassed over $6 billion in worldwide sales. Along the way Daymond John has turned himself into one of the most popular public speakers and marketing experts in the industry. He still works with dozens of brands, companies and celebrities such as Pitbull, the Miss Universe organization and the e-commerce company Shopify. From $10 knock-off hats sold on the streets, to a $300 million personal fashion fortune. Daymond John is truly a remarkable rags to riches story!