By Amy Lamare on November 15, 2017 in Articles › Entertainment

If you're in the market for a mansion and have a $125 million budget, have we got a deal for you! Dosoris Island is located on Long Island's North Shore and offers luxury and privacy just a stone's throw from New York City. Famous families like the Morgans and Astors built enormous mansions out that way. The property for sale now was originally J.P. Morgan's son Junius' 27,000 square foot mansion next door to his father's on the 48-acre island.

Today, Junius Morgan's island retreat is for sale for just the third time in its 100-year history. Now called Dosoris island, the $125 million property includes not only the main manor house, but six houses in total as well as the 46-acre island!

The main house was built in 1919. It has views of the skyline of New York City across the Long Island Sound. Not much about the main house has changed in the 98 years since it was built. The spacious dining room seats 100, the ladies parlor has mahogany paneling, the home has an 80-foot-long marble and slate floored hallway. There are nine bedrooms upstairs including a master suite with two bedrooms –each with their own bathroom and fireplace. The third floor holds two guest rooms, for a total of 11 bedrooms not including the servant's quarters. 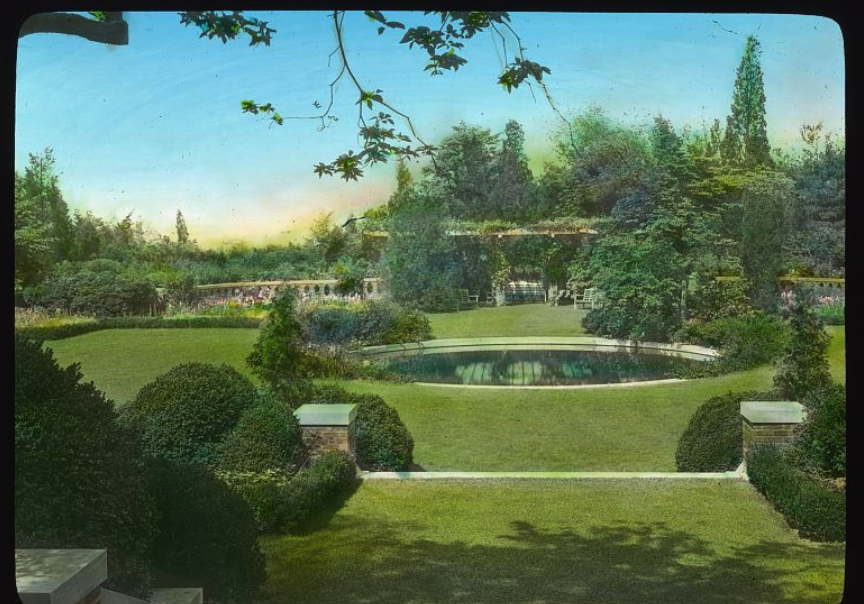 (Photo via The Library of Congress/Wikimedia Creative Commons)

The landscape architect who designed Central Park designed the grounds of the main house. There is an enormous pool, pool house, formal garden, and lawns that lead to a beach. The island also has two areas for helicopters to land and a 250-foot dock capable of handling a major yacht. The island also comes with horse stables, paddocks, and an original garage that can hold eight cars. Not including servant's quarters, the island has 28 bedrooms.

Legend has it that as time went on, Morgan found the house and island isolated. To solve this, in the 1940s, he invited friends to build their own homes on the island. Famous former residents include Jackie Kennedy, who rented one of those homes for a summer after President John F. Kennedy's assassination. Robert F. Kennedy was renting a nearby estate.

When Morgan died in 1960, the house remained in his wife's possession until the 1970s when it was sold along with 19 acres of land to John Samuels, a Texas coal magnate who'd made a name for himself in Manhattan society. Samuels filed for bankruptcy in the 1990s and the estate ended up in a 1993 public auction. The minimum bid was $5.7 million. A socialite from Long Island's North Shore named Margo Walker bought the property. Over time, Walker bought the other houses on the island, which include two homes with four bedrooms each, a home with six bedrooms, and three cottages.

With Beverly Hills mansions running at least $125 million and some East Hampton homes selling for near that amount, $125 million seems a downright bargain!