Pretty Much Every R&B Hit You've Ever Loved Was Written By These Two Guys… And It's Earned Them A FORTUNE!

By Paula Wilson on January 18, 2018 in Articles › Entertainment

What do Janet Jackson, TLC, Jordan Knight, Usher, Mary J. Blige, Prince, the Spice Girls, George Michael, Gwen Stefani, and Pia Zadora have in common? Yea, they're all famous singers. Sure, they're all really rich. We all know that. But here's something that may surprise you: Did you know that pretty much all of these artist's most famous songs were written and/or produced by the same two men? Those two men are songwriting/producer superstars Jimmy Jam and Terry Lewis. Though many of us have probably never heard their names before, we all know their work. Jam and Lewis have literally written and produced just about every R&B jam that has been crooned in the last twenty years. The duo are the musical geniuses behind a jaw-dropping 41 Top 10 songs. And as a result, their musical prowess has netted them both a fantastic an enormous fortune. So, how did they do it? Turns out the secret seems to be a combination of blood, sweat, tears… It also doesn't hurt that they are both excellent musicians.

Jimmy Jam and Terry Lewis were born in the late 50s, in Minneapolis, Minnesota, and Omaha, Nebraska, respectively. They met while in high school in Minneapolis during an Upward Bound trip to the University of Minnesota. Jimmy Jam, also known as James Samuel Harris III, grew up in a musical family. His father was the popular blues and jazz musician, Cornbread Harris. 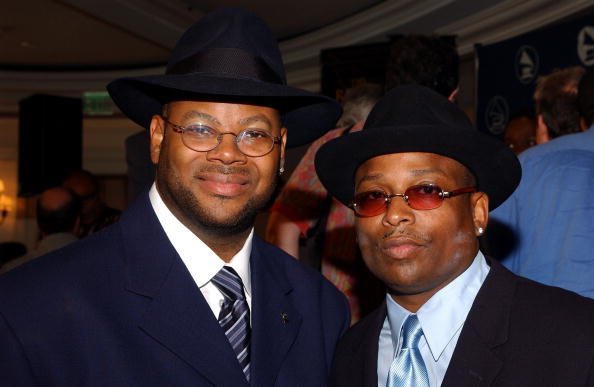 Side note: I put together a quick playlist of Jimmy and Terry's greatest hits and most recognizable songs in case you want to listen while you read. If you have Spotify and the app is open, you should be able to play these right from the article. You can also paste this URL into your spotify browser:

Right out of the gate, Jam and Lewis immediately recognized the potential for collaboration so they formed a band called, Flyte Tyme. Flyte Time later became part of the Prince-produced funk supergroup, known as The Time. Prince added seven other musicians to the lineup, including Morris Day, who wrote many of the group's tracks. The group then toured with Prince, serving as his opening act. However, even though The Time released four albums, with Jimmy Jam and Terry Lewis working with the ensemble on three of them, most of the albums featured Prince singing lead vocals. Not only that, Prince played all of the instruments, too! This did not sit well with various members of the group, including Jam and Lewis.

In 1982, the pair approached Dina R. Andrews, a music executive who managed such artist as The Whispers, Shalamar, and Babyface. She introduced them to Clarence Avant, who agreed to allow them to produce masters for the SOS Band. Andrews also made Flyte Time a business, and began introducing Jam and Lewis as a songwriting duo to other music bigwigs. Over the course of the next few years, they began to build an increasingly high-profile name for themselves, writing and producing tracks for the SOS Band, Cherelle, and Change, as well as working with such executives as Cheryl Lynn, Clive Davis, and Warner Chappelle.

Prince subsequently fired them when the combination of a blizzard and their commitments to the SOS Band got in the way of their ability to make it to a gig. However, being let go by Prince proved to be nothing more than a blip on the radar. One of their tracks, 1983's "Just Be Good To Me", for the SOS Band became a bonafide hit and suddenly they were stars in their own right. They also began to develop a distinctive sound, fueled by their use of the Roland TR-808 drum machine.

Give Me A Beat!

In 1986, their whole world changed when the duo was hired to produce and write Janet Jackson's debut solo album, "Control". Control ended up releasing seven singles, most notably "Nasty" and "When I Think of You", both of which were written by Janet, Jimmy and Terry. Thanks largely to these singles, Control went on to sell 14 million copies worldwide. Overnight, Jimmy Jam and Terry Lewis went from being a couple of anonymous songwriters to the hottest producing duo in the world.

They won a Grammy Award for their work with Janet on Control and were immediately contracted for her follow-up album, "Rhythm Nation 1814". As you probably know, Rhythm Nation was another monster hit. Coincidentally, Rhythm also produced seven singles, five of which hit #1. The album sold 14 million copies worldwide. It was the best selling album of 1990. It is also the only album in history to generate seven songs that ranked in the top five of the Billboard Hot 100. Guess who Janet beat out to take that crown? Older brother Michael Jackson whose album Thriller produced a "seemingly impossible" six songs that broke into the Billboard top five. Rhythm Nation is also the only album in history to chart three number one singles in three different calendar years. Those #1s were 1989's "Miss You Much", 1990's "Escapade" and "Black Cat", and 1991's "Love Will Never Do (Without You)". Take a wild guess who co-wrote all of Janet's hits on Rhythm (minus Black Cat which she wrote solo)… Jimmy Jam and Terry Lewis.

Ok, so at this point Jimmy and Terry were nothing short of musical Gods. And over the next 20 years, they never slowed down or burned out. Between 1990 and today, the duo has racked up a dizzying number of hits for an equally dizzying number of different artists. They have written and produced tracks for a range of artists including TLC, Yolanda Adams, Michael Jackson, Jordan Knight, Boyz II Men, Mary J. Blige, Mariah Carey, Prince, Spice Girls, Vanessa Williams, George Michael, Rod Stewart, Eric Benet, New Edition, Earth, Wind, and Fire, The Human League, Chaka Khan, Ruben Studdard, Gwen Stefani, and Kanye West, among many others. Of their 41 Top Ten Songs on the Billboard Hot 100, 17 have reached #1, including Janet Jackson's "Miss You Much", "Escapade", "Love Will Never Do (Without You)", "That's the Way Love Goes", and "All For You"; George Michael's "Monkey"; "Boyz II Men's "On Bended Knee", Mariah Carey's "Thank God I Found You", and Usher's "U Remind Me". The full discography of just their notable work alone is literally hundreds of songs long. Thirty-one of their songs have been top 10 hits in the UK and 41 have have been top 10 hits in the US. When Boyz II Men received a star on the Hollywood Walk of Fame guess who stood with the band (along with Babyface and Michael Bivins)? I think it's the only time the duo appeared in public not wearing matching suits!

To date, Jimmy Jam and Terry Lewis have produced 16 #1 Billboard Hot 100 songs. That's more than any other songwriting/producing team in history. They've written 26 Billboard R&B #1s. They are in a elite club of musicians who have produced #1 songs in three consecutive decades. They have won five Grammy Awards, and were Oscar nominees for their song, "Again", from the film "Poetic Justice". Together they have been nominated for the Producer of the Year Grammy 11 times, more than anyone else in history. They were inducted into the SoulMusic Hall of Fame in December 2012.

To round out the honors, they have amassed hundreds of Gold, Platinum, Multi-Platinum, and Diamond albums. They've been awarded more than 100 ASCAP songwriting awards. When it's all added up, their enormous success has given both Jimmy Jam and Terry Lewis a personal net worth of $50 million.

And yet despite their massive success, Jimmy and Terry have managed to remain largely anonymous. Under the radar. Literally in the background. If this sounds familiar, they're sort of like the R&B version of their pop music counterpart Max Martin. In fact, when you compare these producing legends side by side, they have had remarkably similar careers. Just like Jimmy and Terry, Max Martin is responsible for exactly 16 Billboard #1s. Jimmy and Terry have produced 41 top 10 Billboard 100 songs, Max Martin has produced 50. Imagine what would happen if this trio worked together on an album.

Though they have clearly earned the right to take a break, neither Jimmy Jam nor Terry Lewis show signs of slowing down. In 2006, they opened their very own state of the art recording studio in Santa Monica, California. In addition to writing and producing albums, they are also making their own music, producing soundtracks, and heading up major music organizations. It just goes to show that a dream, and a willingness to work towards it tirelessly, can make amazing things happen. So what's stopping you?!?!