Good News: You Get To Ride In A Private Jet! Bad News: It's Because You Have Ebola.

By Paula Wilson on October 15, 2014 in Articles › Entertainment

Squashed in amongst articles and headlines about the Kardashians, "Guardians of the Galaxy", the latest gruesome sports injury, and yet another feel good video about cats, has been occasional coverage regarding the Ebola outbreak in West Africa.  Until recently, outbreaks of the virus had been contained quickly.  While previous outbreaks have resulted in deaths, the overall total was not devastating.  The current outbreak is a different story, and in the countries where it is occurring – Guinea, Sierra Leone, Liberia, and Nigeria – medical crews are working around the clock to stop its spread and to create a vaccine.  Travel into and out of these countries has been restricted and numerous charities from around the world are providing funds for research and care.  In August, two American aid workers, Kent Brantly and Nancy Writebol, were airlifted from Monrovia and flown to Emory University Hospital in Atlanta, GA.  Both of them had become infected with the Ebola virus, and they were transported to the US for treatment.  However, when dealing with a highly contagious disease, flying two people infected by it requires a lot of caution, a whole lot of ingenuity… and a specially outfitted ex-Royal Danish Air Force Gulfstream III.

In case you are unaware of the creeptastic-ness that is Ebola, here's a quick primer.  It's a highly contagious disease that is passed via contact with blood or bodily fluids with an infected animal.  It is most commonly passed through contact with monkeys and fruit bats.  It can also pass between humans once a human contracts the disease, and even after surviving a run-in with the virus, you can still transmit it up to two months after you have stopped showing symptoms yourself.  One of the major difficulties of Ebola, is that it shares many of the same symptoms as a number of other illnesses.  Ebola sufferers experience fever, sore throats, muscle pain, headaches, nausea, and vomiting.  Eventually the liver and kidneys begin to malfunction and bleeding begins.  It shares many symptoms with malaria and cholera, so the first thing doctors do is test for those diseases.  Mind you, there is a big difference between Ebola and the other two diseases.  There are cures for malaria and cholera.  There is none for Ebola.  Since the disease was discovered in the 70s, there have been roughly 1000 deaths from Ebola per year.  The current outbreak, which began in March of 2014, has already resulted in 1070 cases and 603 deaths.  The numbers continue to increase.

Everyone involved in transporting the two aid workers to Atlanta, had a healthy appreciation of just how deadly the Ebola virus could be.  So, the question became, how do you put two dangerously ill people, suffering from a highly contagious disease, into a closed environment, without making all of the people who are caring for them sick as well?  It's not an easy question to answer.  The solution came in the form of a plane built for just that purpose. 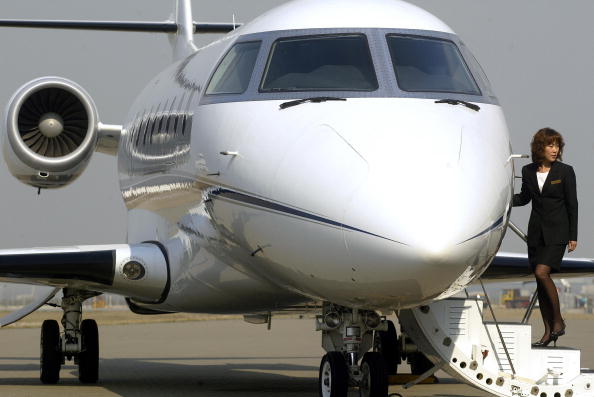 Back in 2005, Phoenix Air, a military air support provider, purchased an older Gulfstream III  that was being retired from the Royal Danish Air Force.  One of two Gulfstreams owned by Phoenix Air, the planes are used for cargo transport and to transport injured military personnel.  The planes look like business jets, which keeps them from seeming aggressive when flying through tense regions to deliver supplies or to pick up people who need medical assistance.  The large cargo doors make it easy to load and unload large items or medical supplies.  For this particular mission, an Aeromedical Biological Containment System was installed in the plane.  The system is basically a tent, made of plastic, with negative air pressure.  This keeps the pathogens from mixing with the air in the rest of the plane.  The plane is already outfitted with a large array of medical equipment, so actually treating the passengers while in the air is relatively easy.

How much does it cost to operate and who is footing the bill? Right now, the plane is technically still owned by Phoenix Air. Back in June the US State Department paid Phoenix Air $5 million to have exclusive rights to use the plane for six months. That contract will likely be extended indefinitely.

The decision to bring the two sick humanitarian workers back to the United States has been met with some controversy.  Some people are curious as to why the U.S. Army's Special Medical Augmentation Response Team-Aeromedical Isolation Team was not chosen for this particular mission.  Part of the U.S. Army's Medical Research Institute for Infectious Diseases, it would stand to reason that they would at least be involved in some way in the transport of the two workers.  They are not, however, even though their unit is equipped with some of the most state-of-the-art equipment available.  Others question the wisdom of bringing a highly contagious disease to a continent that has been Ebola-free until now.  While every precaution has been taken, many people are wondering what will happen if something goes truly wrong once the two medical workers are on American soil.  What do you think?  Are we borrowing trouble or potentially saving lives?