By Amy Lamare on February 27, 2017 in Articles › Entertainment

Phil Mickelson has been a fixture on the golf circuit for decades. The five-time majors winner has made an astounding $665 million during his career. That's enough to make him one of the highest-paid athletes of all time!

Mickelson, nicknamed "Lefty," was born in San Diego in 1970. Despite his nickname, Mickelson is right handed in all things except for golf. He learned golf by watching his father play and mirroring his style – hence his left-handed swing. He has been playing golf since before he was old enough to go to school, which seems to be the trend for dominant athletes of the modern era. Tiger Woods took up golf as a toddler and Serena and Venus Williams took up tennis before they went to school as well. Mickelson also benefitted from a big backyard made over to be a practice area for him. He graduated from the University of San Diego High School in 1988. 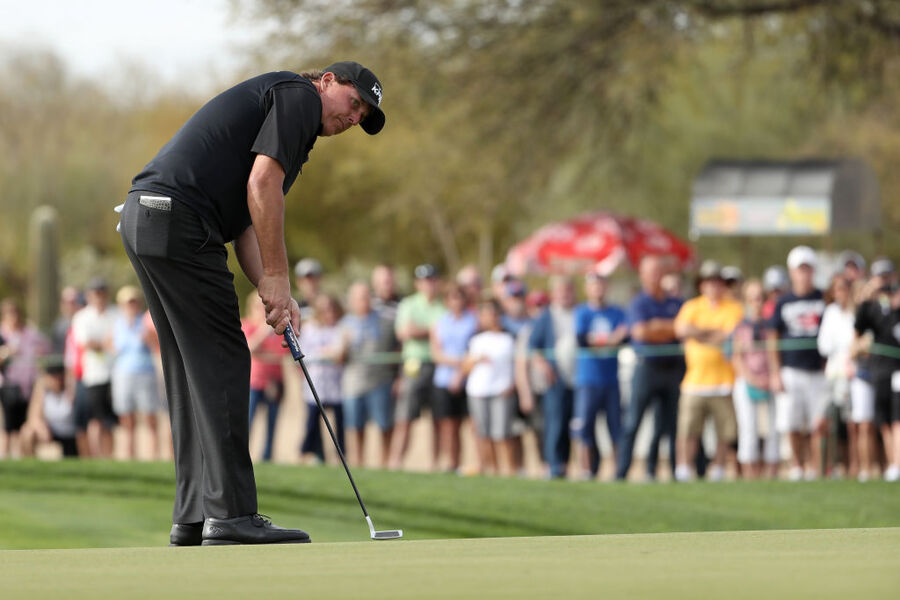 Mickelson then headed off to Tempe, Arizona to attend Arizona State University on a golf scholarship. During his ASU days, he became the face of amateur golf in the U.S. with his three NCAA individual titles and three Haskins Awards as the outstanding collegiate golfer. Mickelson led ASU to the NCAA National Championship in 1990. That same year, he became the first golfer with a left-handed swing to win the U.S. Amateur title.

In January 1991, 21-year-old Mickelson won his first PGA Tour event, Tucson's Northern Telecom Open. He was just the sixth amateur to win the event and no other amateur has won this event since. Also in 1991, Mickelson made his first appearance in the Masters Tournament.

He graduated from ASU in 1992 and turned pro. Due to his win in Tucson in 1991, he didn't have to take part in the PGA Tour's qualifying process. During the decade from 1992-2003, Mickelson notched a bunch of PGA Tour wins but no wins in majors. At the end of the 2003 season, he had 17 top 10 finishes and six second or third place finishes. At this time, he was frequently called "the best golfer never to win a major."

Of course all of that changed the following year when he won his first Masters Tournament. All in all, Mickelson has won the Masters three times: in 2004, 2006, and 2010. He won The PGA Championship in 2005 and The Open Championship in 2013. So the guy who was once called "the best golfer never to win a major" has five major titles under his golf bag. Overall, Mickelson has 42 PGA victories. His last win was at the 2013 British Open.

Mickelson has earned $665 million in prize money, endorsements, appearance fees, and golf course designs. He is the eighth highest-paid athlete of all time. The 46-year-old has won $82 million in PGA Tour prize money in his career with only Tiger Woods earning more. Most of Mickelson's fortune, as with many athletes, comes from sponsorships.

Speaking of Tiger Woods, given their ages and dominance in (then) Pac-10 schools and the PGA, a natural comparison can be drawn between them. Mickelson had a bit of a head start in the PGA, but has been the runner up to Woods for most of the past 20 years. Last year Mickelson passed Woods to be the world's highest-paid golfer for the first time. Of course, Woods was recovering from back surgery for much of last year.

Phil Mickelson earned $50 million last year away from the golf course. He is one of just three active athletes who earn more in endorsements and sponsorships than they do in their respective sports. Roger Federer and LeBron James are the other two. Mickelson has endorsements with Callaway, Barclays, and Rolex, to name just a few of his many. He also has a deal with Amgen, which makes the psoriatic arthritis drug Enbrel. Mickelson was diagnosed with that disease in 2010.

Phil Mickelson has a net worth of $365 million and a few more years to go before he becomes a part of the Senior PGA Tour.