By Brian Warner on June 8, 2014 in Articles › Entertainment

As we chug along through the NBA postseason, I just wanted to remind everyone that there is one person in Miami who has an extra special reason to root for LeBron, D-Wade, Bosh, Birdman and the entire Heat roster: Team President Pat Riley. It goes without saying that as team President, Pat Riley would be extremely proud to see his organization bring home a championship trophy. To make it even sweeter, this would actually be the Heat's third championship… in a row. And as you probably know, winning three championships in a row, in any sport, is universally refereed to as a "three-peat". So why does coach Riley have an extra special reason to root for his team right now? Well, thanks to an extremely shrewd business decision roughly 25 years ago, Pat Riley happens to own the trademark for the term "three-peat". Therefore, if the Heat win, Pat will get paid a royalty for every hat, poster, bumper sticker, mug, jacket, commemorative plate… that uses any variation of those two little words. Here's how is all came to be and what it could possible mean for Mr. Riley's bank account in 2014… 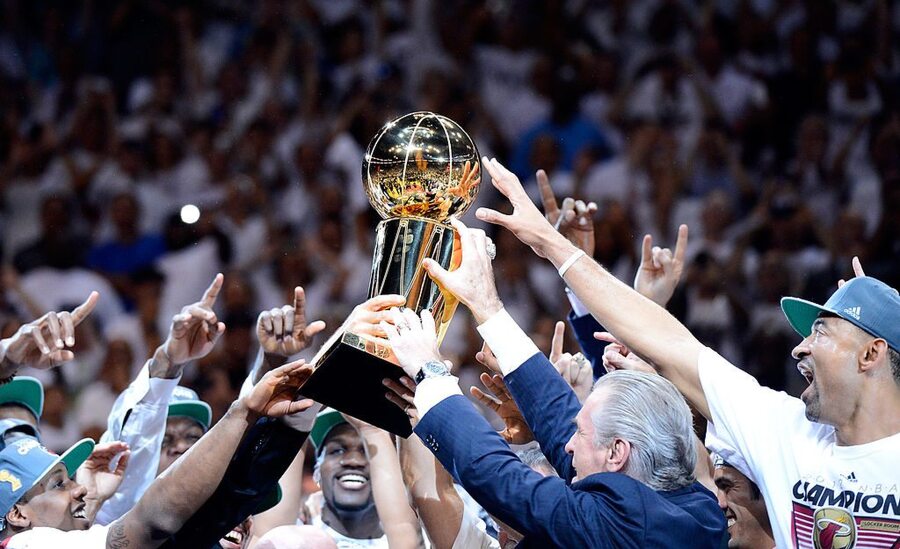 Pat Riley has an impressive resume. He won his first NBA Championship as a player on the 1972 Lakers then went on to win five more rings as a head coach. Two of his rings came consecutively in 1987 and 1988 while he was coach of The Lakers. Heading into the 1989 season, Lakers guard Byron Scott was the first person to use the term "three-peat" as a way to motivate his teammates. Pretty soon "three-peat" became the rallying cry for all Lakers fans throughout Los Angeles. The three-peat looked like a done deal after The Lakers, led by league MVP Magic Johnson, swept Portland, Seattle and Phoenix to land in the NBA finals against The Detroit Pistons. Unfortunately, The Pistons shut down all hope of a three-peat when they crushed The Lakers in a swift four game sweep. But for Pat Riley, there was a silver lining.

After hearing Byron Scott use the phrase "three-peat", Riley made a shrewd business decision: In November 1988, Riley submitted an application to trademark the term "three-peat" through his corporate entity "Riles & Co.". A few months later the application was approved and trademark #1552980 was granted. This meant that anytime someone used that phrase commercially, they would have to pay Pat Riley a licensing royalty. If the Lakers had won in 1989, "three-peat" would have been plastered on thousands of t-shirts, mugs, hats, banners, stickers…etc… and Pat Riley would have cashed in.

As we know now, The Lakers came up short for their three-peat in 1989, but just a few years later the Chicago Bulls were finally able to pull it off. Twice. The Bulls won three consecutive championships from 1991 to 1993 then again from 1996 to 1998. After both series, Pat Riley made out like a bandit when at least half of the NBA's official merchandise licensees opted to use "three-peat" on some form of collectible.

Side trivia: Boxing announcer Michael Buffer got the idea to trademark his famous catch phrase "Let's Get Ready to Rumble!" after hearing about Pat Riley's success with "threepeat". Michael's half brother Bruce helped secure the trademark in 1993, just a few months after the Bulls pulled off their first threepeat. Bruce recently told the Wall Street Journal: "When I decided to trademark the rumble phrase, part of my inspiration was 'three-peat' and the Riley story. It just solidified that you can do this." Thanks to the Rumble trademark, Michael Buffer would eventually go on to earn more than $400 million in licensing and royalty fees. I wonder if Michael ever sent Pat a thank you note?!

If the Heat pull off a three-peat in 2014, Pat is expected to earn his largest royalty windfall yet. The fact that he is the team President makes the merchandise that much more relevant and desirable to NBA fans. Also, it doesn't hurt that the Miami Heat sell more merchandise than any other team in the league and LeBron James sells more jerseys than any other player around the world. On May 15, 2014, a lawyer for Riles & Co filed a trademark to use the phrase specifically on "jewelry, namely rings and sports memorabilia". A week later, the same lawyer filed a trademark to include bed sheets and towels.

Because of this unique situation, Pat's company will likely demand (and receive) a 10-15% royalty rate for every dollar's worth of three-peat merchandise that is sold.  Under more normal circumstances, Riles & Co would likely charge merchandisers a one time flat fee for the rights. It's still a little early to accurately predict, and the Heat still has to actually win the championship, but if a three-peat happens in 2014, Riles & Co should conservatively earn $2-3 million in merchandise royalties.

But wait… there's more! If The Heat win the championship this year, keep in mind that it will be the first time, in the 26 years since the trademark was approved, that one of Pat Riley's teams actually pulls off the threepeat. Not a bad extra bonus.

Over the years, Riles & Co. was granted several other trademarks based on variations of the term, most notably "3 Peat". Riley also successfully defeated a group in Los Angeles that attempted to trademark the term "Three-Pete" in reference to USC football coach Pete Carroll's run at three consecutive national championships. When Riley challenged the trademark application, a patent court ruled that the spelling was not dissimilar enough and "three-Pete" was rejected.

Now you can understand why Pat Riley would be especially happy to see the Miami Heat three-peat this season. On the other hand, he better hope that the rallying cry does not become "Three-Heat" because unfortunately Riles & Co. wasn't quick enough to trademark that term. The term "Three-Heat" was trademarked by a 36 year old lawyer/actor in Los Angeles named Rohit Walia back in 2011. Rohit first thought of the phrase while watching an interview with LeBron James just weeks after he officially joined the Miami Heat from Cleveland. The trademark was granted a few months later and now Walia is sitting on a potential gold mine.

Recently, the validity of the "three-peat" trademark has faced a few legal challenges. Various groups have claimed that the term has become too generic to be commercially trademarked. However, the US Patent and Trademark Office continues to defend their decision and Pat Riley keeps cashing his royalty checks.