By Amy Lamare on December 18, 2017 in Articles › Entertainment

Jerry Richardson is a native North Carolinian who played football at Wofford College, and for then Baltimore Colts. He's also an extraordinarily successful fast food restaurant entrepreneur. But with all these amazing accomplishments, Richardson is probably most famous today for being the majority owner of the NFL's Carolina Panthers. When the NFL awarded Jerry the expansion team contract in 1993 for the league's 29th team, he became the first NFL player since legendary Chicago Bear George Halas to own a professional football franchise. But did a former player have enough money to buy an NFL franchise? Professional athletes should pay close attention to this story, because believe it or not, Jerry's entire fortune started with his 1960 NFL Championship bonus check. Instead of wasting his bonus on fast cars and jewelry, Jerry used his money to launch an incredibly successful fast food empire.

Jerry Richardson was born in 1936 in Spring Hope, North Carolina. He played halfback at Fayetteville High School in North Carolina and wasn't highly recruited by colleges. He ended up at South Carolina's Wofford College with little fanfare, but by the time he left to join the NFL's Baltimore Colts, he was a part of a passing combination with Charlie Bradshaw that had become a national phenomenon. Jerry was an AP Little All-America selection in 1957 and 1958 and he still is Wofford's single-game receiving record holder with 241 receiving yards vs. Newberry in 1956, just one of many records he holds at Wofford. 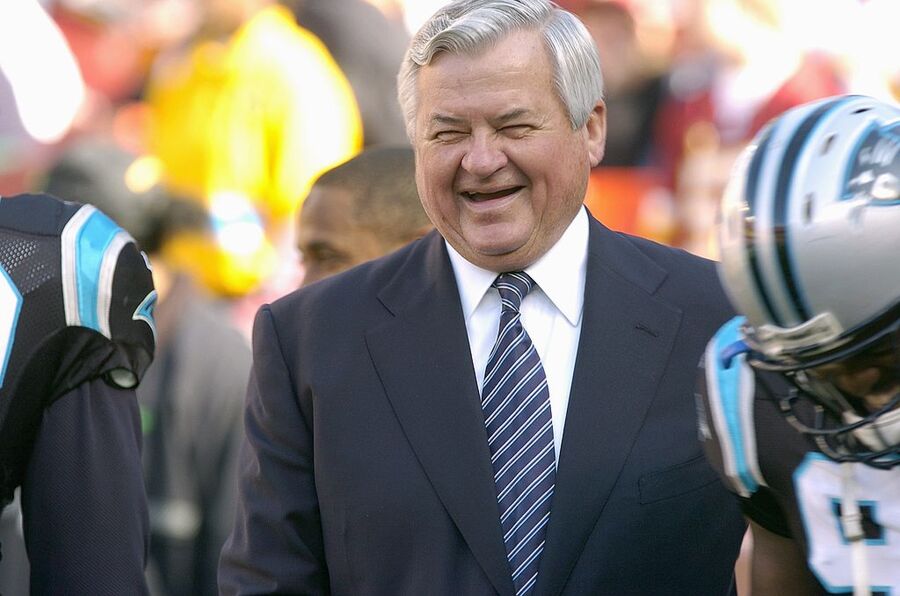 Jerry was drafted in the 13th round of the 1959 NFL Draft by the then defending world champions, the Baltimore Colts. He was the Colt Rookie of the year in 1959. In the 1959 Championship game, Jerry caught a touchdown pass from Johnny Unitas. It was late in the 1959 Championship game, and while coach Weeb Ewbank was thinking a field goal was in order, Unitas had other plans, hitting Richardson with the pass to put the Colts up 21-9. Unfortunately, Jerry's NFL career only lasted two seasons.

Perhaps sensing that the NFL wasn't going to make him rich for life, in 1959 Jerry decided to use his championship bonus money, $4,744 to be exact, to open the country's first Hardee's franchise in Spartanburg, South Carolina. He opened the restaurant with Charlie Bradshaw, his buddy from the Wofford football team. The business expanded quickly, very quickly. From that first franchise, eventually the two launched Flagstar Foods. Today Flagstar Foods is the sixth largest food service company in the United States. The company has over 2,500 restaurants and 100,000 employees around the country. Richardson served as CEO of Flagstar until his retirement in 1995 – coincidentally, the first year the Carolina Panthers played an NFL season.

Jerry and a group of minority partners won the rights to the NFL's newest expansion franchise in 1993, after putting up $206 million in cash, most of which came directly from Jerry's bank account. The Carolina Panthers played their first NFL season in 1995, and though they posted a losing record of 7-9 in 1995, it was an all-time best for an NFL team's debut season. The Panthers posted a 12-4 season in 1996. The Panthers would not have another winning season until 2003, when they won the NFC Championship Game and advanced to Super Bowl XXXVIII, which they lost 32-29 to the New England Patriots.

The Panthers reached the playoffs again in 2005 and 2008, and again this year, 2013, when the team finished 12-4, winning the NFC South. The Carolina Panthers have made the NFL playoffs five times, reaching the NFC Championship Game in three of them.

Jerry Richardson has, so far, fallen short of his dream to bring a world championship home to North Carolina. However, thanks to college superstar QB Cam Newton, their chances in the coming years are better than ever.

As a businessman and NFL owner, Jerry is well known for his calm approach and ability to negotiate. In fact, he played a prominent role in negotiations between the NFL and Player's Union. His style of management and relationship with his players has earned Jerry the nickname "The Big Cat" (also a nod to the Panthers).

Richardson is married to his college sweetheart. He and his wife have two sons, Mark and Jon. Sadly, Jon passed away in July of 2013 after losing a battle with cancer. It was long presumed that Richardson intended to leave the Panthers to his sons, but he forced them out of the organization just before the start of the 2009 season. At 77 years old, Jerry Richardson told Charlotte, North Carolina's WBTV on January 16, 2013 that when he dies, he wants the team sold, but only to someone who intends to keep the team in Charlotte.

Jerry Richardson's dream was to bring the NFL to his home state. Now, for the second time since the expansion team's existence, he's on the cusp of the opportunity to bring the Lombardi trophy home. After purchasing the team for $206 million, today The Panthers are worth $3 billion. When you combine his majority interest in the team and his stake in Flagstar Foods, Richardson has a personal net worth of $2 billion. Not a bad little bank account, considering it all started with a modest championship bonus.

In December 2017, it was announced that Jerry had stepped down from his position with the Panthers organization amid sexual misconduct allegations. Shortly thereafter Jerry decided to put the team up for sale. They are projected to sell for as much as $3 billion.