Actresses Felicity Huffman and Lori Loughlin are part a group of 50 people that have been charged in a massive college entrance exam cheating scandal dubbed "Operation Varsity Blues." Parents paid up to $6 million in bribes to get their children into Yale, Stanford, Georgetown, USC, UCLA, University of San Diego, University of Texas, and Wake Forest. The scheme was discovered by the FBI and federal prosecutors in Boston.

In most instances, the children were unaware that their parents had bribed people to either get higher SAT scores or a fake athletic resume that, with the help of a college coach in on the scheme, helped the children get accepted to a college as an athletic recruit—which typically is a lower standard of admission academically.

Felicity Huffman and William H. Macy have two daughters, 18-year-old Sofia and 16-year-old Georgia. Macy was not charged in the scandal. Lori Loughlin and her husband Mossimo Giannulli also have two daughters, 19-year-old Olivia and 20-year-old Isabella. Huffman, Loughlin, and Gianulli have been charged with Conspiracy to Commit Mail Fraud. 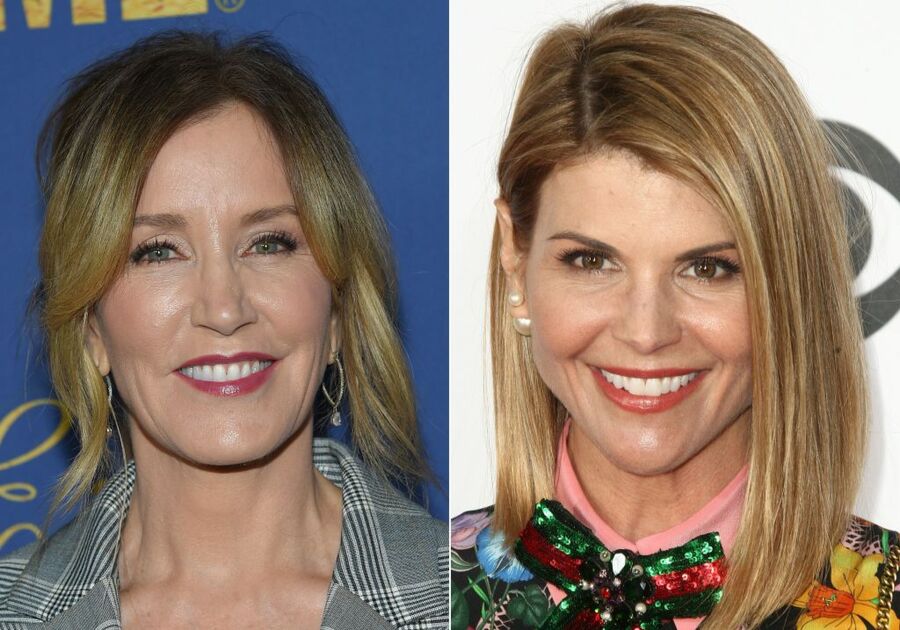 "This case is about the widening corruption of elite college admissions through the steady application of wealth, combined with fraud,' US Attorney Andrew Lelling said on Tuesday in a press conference. There can be no separate college admission for wealthy, and I will add there will not be a separate criminal justice system either."

William Rick Singer was the ringleader of the scandal. He is the founder of Key Worldwide Foundation. It is believed that Singer received $25 million from parents. He then used that money to payoff or bribe people who could make their children recruited athletes or improve their resume in other critical admissions categories.

Felicity Huffman paid $15,000 to take part in the cheating scheme on behalf of her oldest daughter. She also arranged to take part in the scam a second time for her younger daughter but pulled out. The legal documents state that Huffman had the location where her daughter took her SATs changed from her own high school to a testing center in West Hollywood. Basically, Huffman was getting her daughter labeled with a fake learning disability to have her test taking location moved to a special location with a proctor who was in on the scam.

The test was then run by a proctor that flew in from Tampa and told investigators he "facilitated cheating, either by correcting the student's answers after the test or by actively assisting the student during the exam." Huffman's daughter scored a 1420 on her SAT, which was a 400 point improvement over her PSAT results from a year earlier.

The proctor was paid $40,000 by Key Worldwide Foundation—the same organization that Huffman made a $15,000 "charitable donation" to. The legal documents include the transcript of a call between Huffman and the test proctor in which she admits that her older daughter had help and she'd like her younger daughter to receive the same treatment.

Lori Loughlin and Massimo Giannulli paid bribes of $500,000 to have their daughters designated as recruits to the crew team at USC. The girls got into USC and then did not take part in crew. Loughlin and her husband emailed Singer in 2016 about their kids' college prospects and told him that they wanted to do the work that would get them into USC, instead of ASU. Emails reveal that it was then decided that the girls would be recruited as crew coxswains. A month later, Donna Heinle, the senior associate athletic director at USC, photoshopped Isabella's head onto the body of an athlete and then presented Isabella as a potential athletic recruit. She was given conditional admission.

A check for $50,000 was then sent to Heinle from Giannulli. He then asked Singer if he could talk to USC's athletic director about the incident while they were playing golf together at Augusta. Singer told him that wasn't a good idea because he had discussed the possibility of getting Isabella into USC a year earlier and the athletic director thought that Loughlin and Giannulli "would be good for a million plus."

Isabella was accepted to USC the following March. After that her parents received a note asking for a donation of $200,000 to Key Worldwide Foundation. The amount was wired to the organization and the Loughlin/Giannullis received a note that said no goods or services had been exchanged for the money—which is false. The exact same process was then used to get Olivia into USC the following year. Issues came up, however, when Olivia's high school guidance counselor wondered how she got into USC based on her involvement with crew when Olivia didn't row.

Things began to fall apart in October 2018 when the IRS audited Key Worldwide and saw all the donations from parents whose children then got into USC.  Ali Khosroshahin, the former women's soccer coach at USC, Laura Janke, the former assistant women's soccer coach, and Jovan Vavic, the school's current water polo coach are also charged in the case alongside Dr. Heinel.

Singer's bio on the website for the Key Foundation lists his ability to get kids into the college of their choice. Singer is heralded for "helping students discover their life passion and guiding them along with their families through the complex college admissions maze. Over the years, Rick and his team of coaches have helped thousands of students fulfill their life passion in getting into the right college to achieve their dreams. Using The Key method, Key coaches help unlock the full potential of your son or daughter and set them on a course to excel in life."

That method has now been revealed to be taking money from parents which was then used to bribe or pay off individuals. Singer paid Igor Dvorsiky and Lisa 'Niki' Williams to administer the SATs to the children of those charged in the scheme. Those two people then paid Mark Riddell, who would take the test for the students or change their answers to give them a better score.

Another person named in the indictment is Bill McGlashan who founded The Rise Fund alongside Bono.