By Paula Wilson on June 15, 2021 in Articles › Entertainment

If you look at the careers of most successful people, there always seems to be one pivotal moment that changed everything forever. Usually the moment is something small and potentially unrecognizable at first. A random piece of encouragement from a mentor.  A chance encounter with a future business partner. Maybe an eye-opening article on CelebrityNetWorth 🙂 The point is, typically the magic moment that makes a big impact starts out as something very small and fleeting.

For Chris Blackwell, the founder of Island Records, his magic moment was anything but small.  In fact, his magic moment was nearly the moment that ended his life. Believe it or not, Blackwell owes his entire career to a shipwreck. Coming to within an inch of dying on a boat, would eventually help earn this ordinary British kid into one of the most successful individuals in the history of the music business with a personal net worth of $300 million.

Never heard of Chris Blackwell? Well, let's see if this helps give you some perspective: Without Chris Blackwell, the world would never have heard the music of U2, The Cranberries, Jethro Tull, Emerson Lake & Palmer, Cat Stevens, Grace Jones, Melissa Etheridge… just to name a few.

Oh, and a little artist from Jamaica you MAY have heard of named… Bob Marley.

As a matter of fact, without Chris Blackwell, there's a very good chance that most of the planet would never have heard any reggae music at all. Seriously. This is how a near death experience on a shipwrecked boat changed Chris Blackwell, and the sound of world music forever… 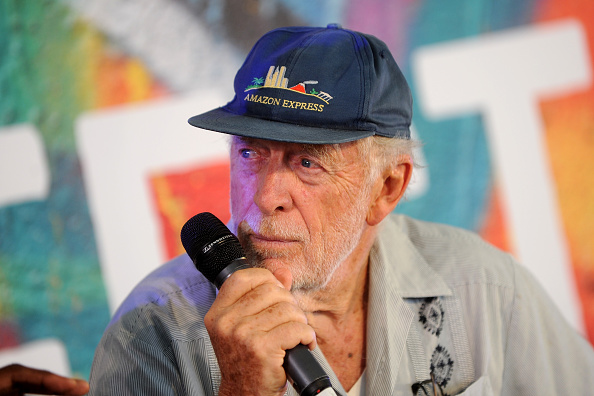 Chris Blackwell, also known as Christopher Percy Gordon Blackwell, was born on June 22, 1937 in Westminster, London, England. His father was a businessman and his mother came from a family that had been part of Jamaica's ruling class for centuries.  In fact, her family was one of a group of 20 families that controlled Jamaica throughout the 20th century.  His parents divorced when he was a child. His mother would eventually become the muse of James Bond author Ian Fleming. For better or worse, she is also the inspiration behind the character, Pussy Galore.

Chris Blackwell grew up in Jamaica with his mother, living on the several thousand acres of land her family owned.  He then moved to Britain to attend London's Harrow School in his teens.  After completing his schooling, he chose not to go to college, and instead worked for the Governor of Jamaica for a short time. He then set off to launch a career in real estate and retail.  He ended up managing jukeboxes, supplying them to bars and clubs all over Jamaica.  His life seemed like it was on a fairly predictable course until one fateful day.

As a hobby, Chris often sailed solo along the coast of Jamaica. One day in 1959, when Chris was 21 years old, he set off on another sailing adventure.  However, this trip would not be like the others.  The boat ran aground on a coral reef, and he was unable to get free.  After realizing he was stranded, he chose to swim for shore in order to get help.  The swim was long. Much longer than he anticipated. By the time he reached the beach, he was completely exhausted and barely conscious. Somehow he managed to struggle out of the surf and then walked along the shore, desperately looking for help. He was miles from the nearest town and temperatures were soaring.

Some local Rasta fisherman found him laying in the dirt, within an inch of his life. They picked him up and carried him to their home where they slowly nursed him back to health. These local Rastas cleaned his wounds and fed Chris for nearly two weeks.  During that time, Chris' rescuers sang reggae music day and night. Blackwell was hooked. This fascination and interest in Rastafarian culture would come to have a huge impact on both his life, and the global music scene.

Later that year (1959), Chris convinced his parents to give him $10,000 to launch his own record label.  The label, which he appropriately named Island Records, would be dedicated to music coming from the musicians the islands around Jamaica.

The label's first release was a jazz album by Lance Heyward from Bermuda.  Then he shifted his focus to releasing tracks by the Jamaican artists that all of the locals loved.  This proved to be a good strategy.  Island Records scored its first #1 hit in 1959 with "Boogie in my Bones/Little Sheila" by Laurel Aitken.

By 1962, Island had begun to make a real name for itself.  The label had released two albums and 26 singles.  After moving to England, he sold his albums out of the back of his car, until executives began to take notice of the tiny label.

Chris quickly became the go-to producer for Jamaican music.  One of his early successes in England, was producing 15-year-old Millie Small's "ska" cover of "My Boy Lollypop".  The song was a smash hit and sold 6 million copies worldwide.  Blackwell knew the song was going to be a hit when they recorded, so he'd actually licensed it to a larger label.  When the track blew up, he began traveling with Millie since she was still so young, and all of the major labels wanted to know who he was.  Suddenly, Island Records was part of the mainstream.

Next, he shifted Island's focus to a more rock sound. Over the next few years, the label went on to become one of the most influential music companies in the world.  He was known for nurturing and growing his artists, and his list of acts is truly jaw-dropping.  He signed The Spencer Davis Group with Steve Winwood, Traffic, Emerson, Jethro Tull, Cat Stevens, Grace Jones, Sly and Robbie, Sparks, Nick Drake, Robert Palmer, Melissa Ethridge, Tom Waits, The Cranberries, PJ Harvey and U2, just to name a few.

But even with all these incredible successes, Blackwell's biggest contribution to the world is, undoubtedly, the discovery of Bob Marley.  Hugely popular in Jamaica, it was Blackwell and Island Records that brought Bob Marley and the Wailers to international fame and success.  Blackwell had pinned all of his reggae hopes on Jimmy Cliff, producing his film, "Harder They Come", and the soundtrack that went along with it.  Though the movie and the album were successful, Jimmy Cliff was unsatisfied with the way Island seemed to pay more attention to its rock acts.  He left Island and signed with EMI.

Just a few days later, Bob Marley walked into Blackwell's office, after his record deal with another label had tanked.  Marley and the Wailers were actually stranded in London and were forced to play at school assemblies to make money.  Blackwell gave Marley 4,000 GBP and told him to go record a full-length album, and to bring it back to him ASAP.  Bob eagerly complied and the recordings became his first album, "Catch a Fire."

"Catch a Fire" only sold moderately well, but it was enough to make a second release, "Burnin'."  "Burnin'" contained the hit track, "I Shot the Sheriff", and Blackwell finally had his reggae superstar.

"Burnin" was certified Silver in the UK and Gold in the US. Their next two albums "Natty Dread" and "Rastaman Vibration" both went Gold. Then, on Jun 3, 1977, Bob Marley and the Wailers released the album Exodus. Exodus was a massive success around the world. It went 8 times platinum in Canada alone. Exodus established Bob Marley around the world and turned him into one of the biggest live acts anywhere. To date, Bob Marley and the Wailers have sold more than 75 million albums worldwide.

While the label had multiple successes, it was actually experiencing severe financial struggles.  Blackwell had attempted to spin the company into a multi-media empire, but the gamble did not pay off.  Their woes were compounded by Bob Marley's death in 1981.  In the late 80s, the company was unable to pay U2 more than $5 million in royalties they were owed, because the money had been used to launch an unsuccessful film division.  In lieu of compensation, Blackwell gave U2 ownership of all of their masters and 10% of the company instead.  In return, U2 helped pay off some of the company's debts and remained with the label even though it was extremely close to bankruptcy.  They were very clear that they were willing to do this only because they were loyal to Blackwell.  Their generosity paid off.

The label's fortunes eventually got back on track, but with acts like U2, Robert Palmer, and Angelique Kidjo selling massive numbers of albums and touring constantly, Blackwell realized his little Jamaican label had outgrown his capabilities.

In 1989 Blackwell sold Island Records to PolyGram $300 million. That's the same as around $650 million today.

The sale did NOT include the copyrights to Marley's music. Blackwell continued to own and manage Marley's publishing catalog until 2018, at which point he sold the 80% of the copyrights to a company called Primary Wave for $50 million.

Blackwell continues to own the publishing rights to U2's early songs.

He remained on the board of the label for ten more years, but focused the majority of his time on producing film projects, and his original passion…

Throughout his career, whenever Chris had extra cash he bought real estate.

One of Blackwell's most famous properties is Ian Fleming's estate, "Goldeneye". Fleming wrote all of the James Bond novels from this estate.

Fleming died in 1964. In 1976, Bob Marley purchased the estate. A year later, Bob flipped the estate to Chris. Chris eventually acquired an additional 25 acres, bringing the property to its current total of 40 acres. He added huts and carved out a pristine beach he named James Bond Beach.

In the 1980s Chris opened the property up to the public as a luxury hotel called the Goldeneye Hotel and Resort. Many of the rooms rent for upwards of $5,500 A NIGHT.

All the most famous people in the world have rested in the lap of luxury at Goldeneye at some point. Jay-Z called it the best "hideout to visit" on earth.

Sting wrote "Every Breath You Take" while vacationing on the estate in 1982.

Chris eventually expanded his empire to included a nice collection of Jamaican hotels. Through his property company, Island Outpost, he operates The Caves in Negril, Strawberry Hill in the Blue Mountains and the Fleming Villa. He has also sold a number of properties in the Bahamas and Miami, Florida.

Chris Blackwell has been called one of the most influential figures in British music history by multiple music publications. He was inducted into the Rock and Roll Hall of Fame in 2001.  Today he is widely considered the person responsible for bringing reggae to the mainstream.

In 2004 he received the Order of Jamaica for his decades of philanthropy and outstanding contribution to the entertainment industry.

Dozens of popular musicians name him as the music executive that is most responsible for their success.  Just think, if Chris Blackwell hadn't crashed his boat onto a random reef in the 50s, we might never have heard of great artists like Bob Marley or U2.  It's kind of amazing that one moment in a single person's life, can have such a massive cultural impact worldwide. When you hear stories like that, it seems almost impossible to not believe in fate or some kind of higher power.