One Of My Internet Entrepreneur Idols Just Sold His Company For $575 Million… IN CASH.

By Brian Warner on July 14, 2015 in Articles › Entertainment

The Mark Zuckerbergs and Evan Spiegels of the world seem to gobble up all the major headlines about insanely successful, young web entrepreneurs. It makes sense. Facebook has given Zuck a net worth of $35 billion and turned him into one of the most powerful people on the planet. Snapchat has given Evan Spiegel a net worth of $1.5 billion and has enabled him to date Victoria's Secret super model Miranda Kerr. They are 31 and 25 years old, respectively.

If you asked the average die hard internet entrepreneur who they admired most in the industry, sure they would mention the big names like Zuckerberg and Spiegel, but I also bet my bottom dollar that a lot of the respondents would list a guy named Markus Frind. Have you heard of Markus? Probably not off the top of your head. You may not have ever even heard of the company he just sold for $575 million… IN CASH.

When I first launched CelebrityNetWorth back in 2008/2009, everyone who was in the business of launching internet businesses idolized Markus. We all met in chatrooms and forums to discuss ideas and trade secrets, but we also gushed about Markus Frind. I can safely guarantee you that hundreds, if not thousands of those people eventually launched enormously successful businesses using Markus as their inspiration. Even before what happened today, I definitely considered him one of my biggest internet idols. And most people reading this still probably have no idea who he is or what he did! So let's get to that…

So who is he and what did he do?

Markus Frind is the founder of the insanely simple dating site PlentyofFish. Frind launched POF in 2003 as "a way to improve [his] resume". He had recently learned a new programming language called ASP.NET and spent just two weeks writing all the code needed to launch the first version. PlentyofFish.com was successful practically overnight.

POF's innovation was that it was totally free for users and it was incredibly easy to use. Anyone could create a profile and start flirting in a few minutes. Instead of charging monthly fees, which was the standard practice for dating sites at the time, POF earned money through advertisements which were placed throughout the site. It also eventually offered a premium pay service that came with some upgraded account options. As I mentioned previously, the site was a hit right out of the gate. Its popularity spread and spread over the next year until Markus finally had to make it his full time job.

Why did everyone idolize Markus?

Markus earned every internet entrepreneur's admiration sometime in 2005 after he became the person that everyone generally believes was the world's first Google millionaire. He didn't become a millionaire by working at Google. Markus was very likely the first person to earn more than a million dollars from Google's newly launched advertisement service Adsense.

Adsense is the product that made it so anyone who launched a website could instantly have ads and make money without hiring a sales team or needing tons and tons of traffic. Before Adsense it was pretty much impossible to make any real money online without being a massively popular, established brand website. CelebrityNetWorth still gets a large portion of its ad revenue from Adsense.

In March 2006, Markus became an absolute legend when he posted a photo of his Adsense check that represented POF's previous month's earnings. The total amount payable? $901,733.84.

The photo above is single-handedly responsible for countless internet careers and websites, including CelebrityNetWorth. For the first time ever, people knew that real money could be made on the running websites.

And that was just the beginning. Over the next 10 years, Markus and POF never really veered off course. By 2008, he was profiting $10 million per year from a site he openly worked on for less than 10 hours per week.

He did eventually hire some employees to help manage the operation, but Markus never did one thing that pretty much everyone else in his position would have done: He never took a dollar from outside investors.

"By the time I found out what VCs were, I was already making millions in profit and I didn't see the need to raise money because I wouldn't know what to do with it."

Instead of selling off 20, or 30, or 40% of his company for a quick and easy payday, Markus stayed independent and continued on his path to online dating world domination. That last sentence might sound like a crazy embellishment, but it's not. By 2011, POF had 30 million users. Today the site has an estimated 100 million registered users. Nearly 4 million of those users log on and use the site every day. If that 100 million number is accurate (some say the number is actually 90 million), then POF would be the largest dating site in the world. POF is easily the #1 dating site in Europe and many other countries.

Today PlentyofFish generates $100 million per year in revenue. Frind's little two week resume booster project is also reportedly responsible for over one million babies to date. The company employs 75 staff members, most of whom are programmers and customer service representatives. And this is how simple it looks: 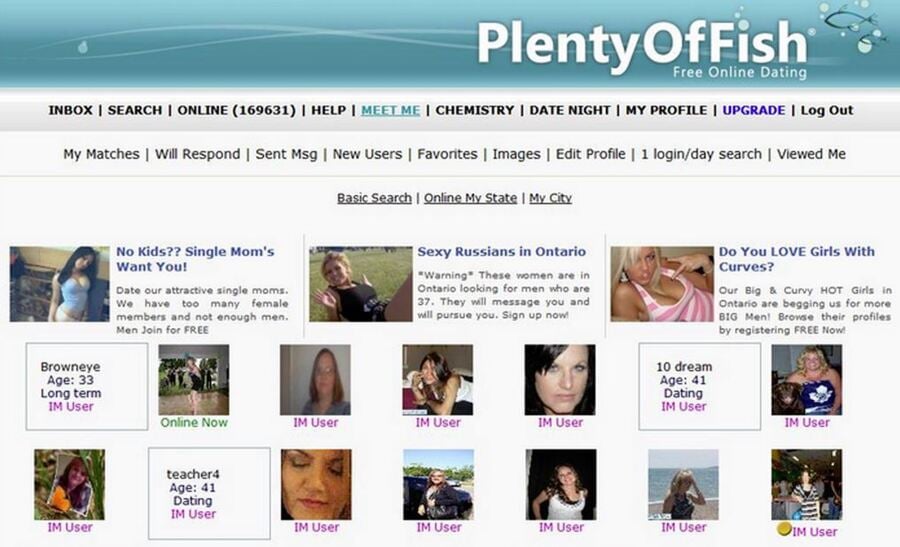 Earlier today (yesterday if you are reading this on Wednesday), it was announced that Markus had sold PlentyofFish to Interactive Corp (IAC) for $575 million in cash. IAC already owns Match, Tinder, Chemistry.com and OKCupid. So it's a perfect fit. An IAC executive explained:

"As more people than ever use more dating apps than ever with more frequency than ever, PlentyOfFish's addition both brings new members into our family of products and deepens the lifetime relationship we have with our users across our portfolio."

Every internet entrepreneur who was impressed by $900k a month 10 years ago, spent at least part of today on the floor in shocked jealous spasms. I can't tell you how many texts/emails/IMs I got about this sale: "Did you hear about Markus Frind?" "He finally did it." "Luckiest/smartest guy ever." Hopefully those same people mutter those same exact phrases about CelebrityNetWorth someday!

$575 million for a company that was launched in two weeks for less than a few hundred dollars. If that's not enough to inspire you to go out and get your fortune… then I quit.