One Minute He's The Richest Person In Russia. The Next He's Locked In A Siberian Prison For 10 Years. Real Life Nightmare.

By Amy Lamare on February 24, 2022 in Articles › Entertainment

Picture this: You're the richest person in Russia with a personal fortune over $15 billion dollars. One day you wake up feeling pretty good about life, the very next day, you wake up in a Siberian prison. You stay in that prison, not for a week, or a few months. You rot away there for the next 10 years. During that horrible decade, your wealth evaporates into the hands of your arch enemy. Sound too unbelievable to be a true story? It almost sounds like a really bad nightmare. Well, unfortunately this is exactly what happened to former Russian business tycoon Mikhail Khodorkovsky. His only crime? He dared to be a capitalist and was a vocal critic of Vladimir Putin. Let's take a look at how this nightmare went down. 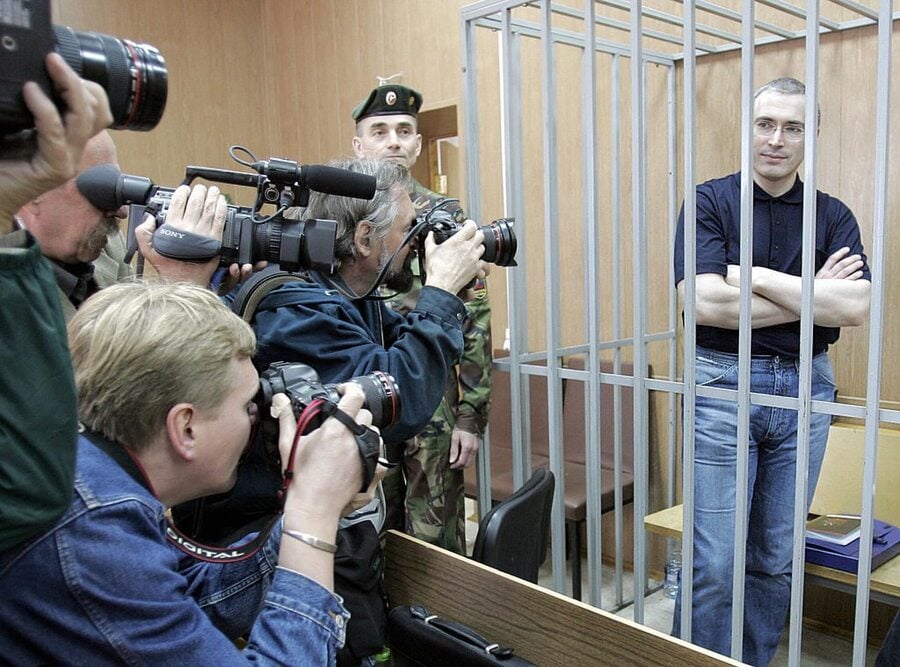 Mikhail Khodorkovsky was born on June 26, 1963 in Moscow. He grew up in a typically Soviet family of the era. His parents were engineers and his family had a two room apartment.  As a young man, Khodorkovsky's ambition was evident. He excelled in school, where he was the deputy head of the Communist Youth League and ran a computer import business under the wing of the party's youth movement in the 1980s.  In 1986 he graduated from the Mendeleev Moscow Institute of Chemistry and Technology with a degree in chemical engineering.  He was primed and ready for the collapse of the Soviet Union, as his involvement in the Communist Youth League (called the Komsomol) enabled him to exploit a loophole in Soviet law that allowed these organizations to convert administrative currency units, called beznalichny rubles, into cash, called nalichny rubles. This is one of the purest examples of emerging capitalism in Russia, a country who has been hostile to the idea of capitalism for seven decades.

When former Soviet Prime Minister Mikhail Gorbachev introduced perestroika and glasnost in 1986, it was designed reduce the state's role in the economy as quickly as possible and to create a class of capitalists who would support continued economic reform. Khodorkovsky, with his cash reserves from before the collapse, was among those early capitalists to benefit from the privatization of government functions and assets. Once perestroika started Khodorkovsky used his connections within the structure of the Communist party to forge a foothold in the emerging free market. He started his very capitalistic business under the cover of the Komsomol.

Khodorkovsky opened his first business in 1986, a café. This was wholly possible because of perestroika and glastnost, not to mention the cash reserves that Khodorkovsky had been accumulating.  In 1987, four years before the fall of the Soviet Union. Khodorkovsky along with his partners, founded one of the first banks of the post –Soviet ear – Menatep. The bank expanded rapidly, funding the successful import-export business that Khodorkovsky had also started in the meantime.  In an eerily prophetic statement at the time, Khodorkovsky said:

"Many years later I talked with people and asked them, why didn't you start doing the same thing? Why didn't you go into it? Because any head of an institute had more possibilities than I had, by an order of magnitude. They explained that they had all gone through the period when the same system was allowed. And then, at best, people were unable to succeed in their career and, at worst, found themselves in jail. They were all sure that would be the case this time, and that is why they did not go into it. And I" —Khodorkovsky lets out a big, broad laugh at the memory — "I did not remember this! I was too young! And I went for it." 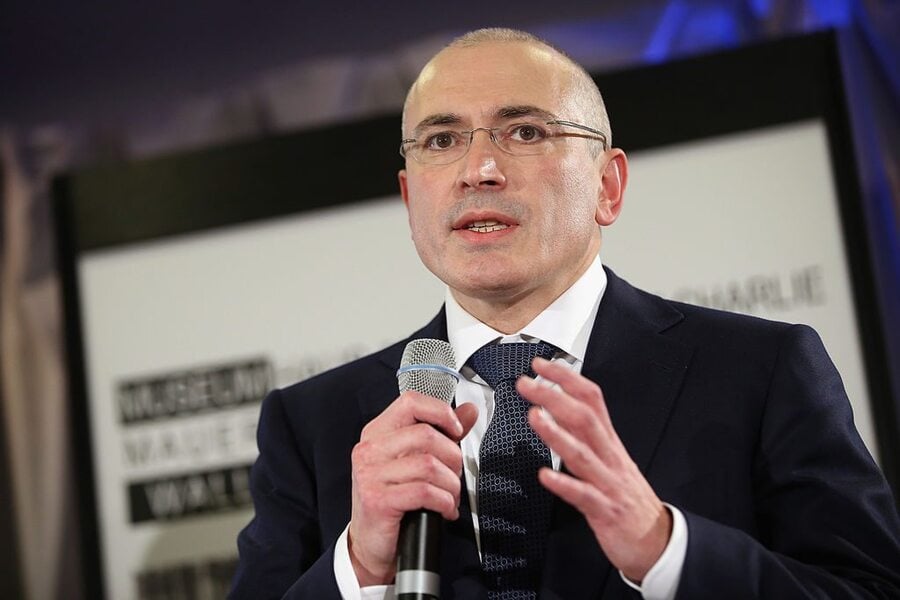 Khodorkovsky made his first millions in the early 1990s when his bank was able to acquire an enormous amount of shares in businesses and companies that were being offered for bargain prices during the process of privatization.

We should stop for a moment and mention that the free-market economy in Russia was not hugely popular with the people. Many were left severely impoverished when the draconian Soviet government programs were ended and did not have the means or ambition to go out and create a new life for themselves and their families.  Khodorkovsky and other oligarchs of his ilk were never all that popular amongst the Russian people. He is a figure that perhaps only Western economies can relate to. Part sheer ambition to have a better life than his parents, part corporate raider- he is possibly one of the best examples of capitalism Russia has to offer. Khodorkovsky absolutely thrived under the leadership of Boris Yeltsin.

In 1992, Khodorkovsky was made the chairman of the Investment Promotion Fund of the fuel and power industry. He was appointed Deputy Minister of Fuel and Energy of Russia in March 1993. He bought the fertilizer firm Apatit in 1994. And in 1995, Khodorkovsky, through his bank Menatep, acquired a major Russian oil producer, Yukos, which had debts exceeding $3.5 billion, for the bargain basement price of $300 million. The Siberian oil fields of Yukos soon became one of the largest Russian companies to emerge from the privatization of state assets during the 1990s.

Khodorkovsky continued to thrive throughout the 1990, building an enormous fortune. Then Vladimir Putin became Russia's head of state and the two men did not see eye to eye. In February 2003, at a televised meeting at the Kremlin, Khodorkovsky argued with Putin about corruption. He accused Putin of allowing government officials to accepting millions in bribes.  The gauntlet was thrown and Khodorkovsky was officially on Putin's radar as a critic of the Kremlin. 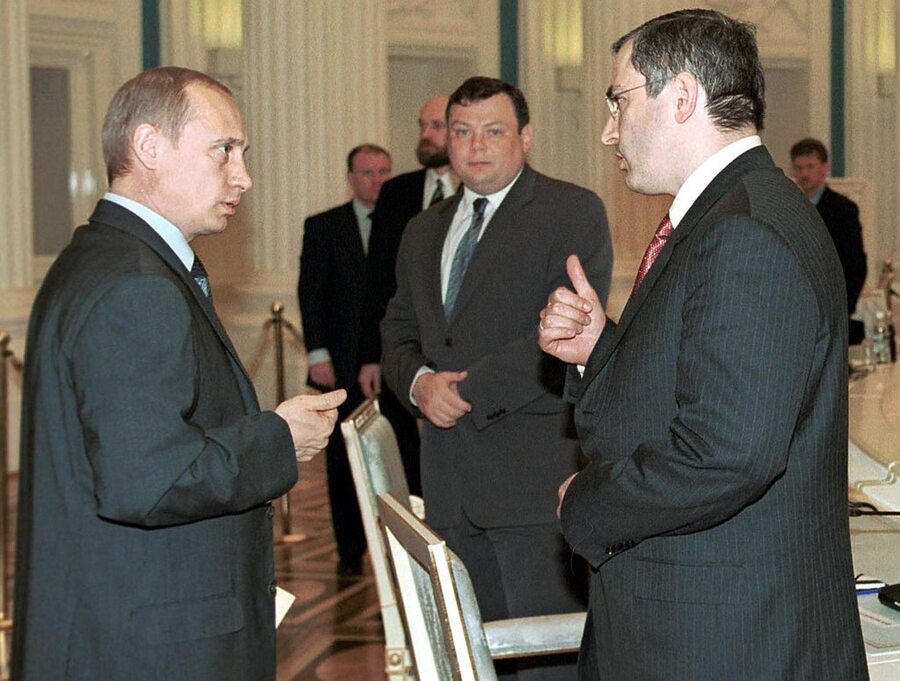 Khodorkovsky, a well-known philanthropist at the time, had also made donations to nearly all of Russia's political parties, including the communists.  He never made any secret of his support for Putin's liberal opposition.

In 2003, Khodorkovsky and Roman Abramovich shared the Person of the Year award given by Russian magazine "Expert".  In 2004, Khodorkovsky was the wealthiest man in Russia with a net worth of $15 billion. He was the 16th richest person in the world.

On October 25, 2003, Mikhail Khodorkovsky was arrested and told he was to appear before investigators as a witness, however, when taken into custody and charged with fraud. Vladimir Putin's government then had shares of Yukos frozen and eventually took levied such drastic actions that it led to a collapse of the company's share price and the dissolution of much of Khodorkovsky's wealth.

In May 2005, Mikhail Khodorkovsky was found guilty and sentenced to nine years in prison.  While still serving his sentence, he was tried again and found guilty of embezzlement and money laundering in late 2010. Khodorkovsky's lawyers have maintained that he was denied due process and that the charges were trumped up to suit the Kremlin's agenda.

Khodorkovsky served his first sentence at a Soviet-era labor camp in eastern Siberia. He was released suddenly, and without reason, in late 2013 in a stunt largely believed to be P.R. for the Sochi Olympics. It's unclear exactly how much money Khodorkovsky has today, but it is fair to say that the vast majority of his net worth is gone. In 2005, Mikhail handed over his entire stake in Yukos to his former partner Leonid B. Nevzlin for an undisclosed amount of money. At the time of the transaction, the shares were virtually worthless.

In July 2014, a group of investors including Leonid B. Nevzlin successfully won an international judgement against the country of Russia for illegal plundering Yukos. The verdict came with a $50 billion judgement against Russia. Russian officials have vowed to fight the verdict and have challenged the international court's authority. When reached for comment about the verdict, Mikhail Khodorkovsky made it clear that he has no interest in this case and will not benefit financially from the verdict.