How One Graffiti Artist Became a Multi-Millionaire Via Facebook

Legend has it that a broke, struggling artist named David Choe became a multi-millionaire when he crossed paths with charismatic Facebook co-founder Sean Parker (you remember, the Napster founder played by Justin Timberlake in The Social Network). Supposedly Parker offered Choe $600,000 in 2005 to paint the walls of Facebook's Northern California offices, and then offered stock in the company instead. Facebook was brand new. No one except some Ivy League college students had heard of it. Choe thought it was B.S. But he still chose the stock. Today David Choe is worth $200 million. Here's how it all came together…

Choe, an artist of Korean descent who grew up in Los Angeles, wasn't exactly a struggling painter when he signed on for the Facebook stock. Yeah, he'd just spent about a week in jail for some graffiti charges, but he was actually already a very successful artist in his own right. Parker didn't pluck him off the streets and out of obscurity, but the Facebook deal definitely catapulted him into the spotlight.

Choe started drawing as a kid. He was inspired by graffiti artists and movies like Star Wars, and over time developed his own signature style – what some call "dirty style." It's loose, kinetic, and raw. Choe dropped out of high school and later did a brief stint at an art college in Oakland before dropping out for good.

These days he's known for his graffiti, murals, figures, graphic novels, podcasts, and appearances on Anthony Bourdain's CNN show Parts Unknown. If you saw Bourdain's L.A. Koreatown episode, you saw Choe, who took the famous chef (and foodie) to Sizzler, of all places. 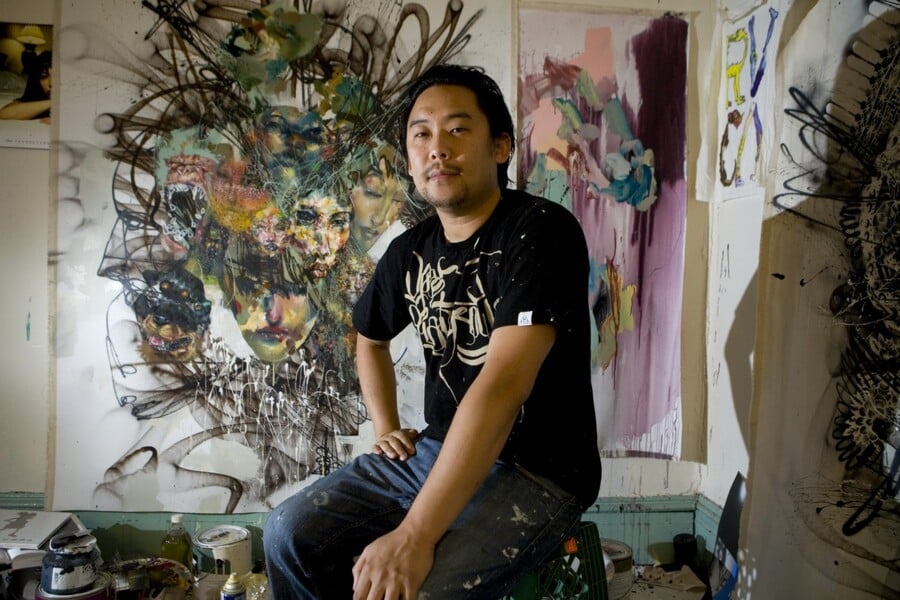 Early in his career Choe was closely identified with the bucktoothed whale he has been spray-painting on the streets since he was a teen. He's gone on to create cover art for Jay-Z and Linkin Park's multi-platinum album Collision Course, made artwork for the sets of films like Juno and The Glass House, and during the 2008 presidential race, Choe painted a portrait of then-Senator Barack Obama for use in a grassroots street art campaign.

Parker had been a fan of Choe's work, which is why in 2005 the Internet entrepreneur asked him to paint murals in Facebook's first Silicon Valley office. A few years later, in 2007, Facebook CEO Mark Zuckerberg commissioned Choe to paint more murals. So he's sort of like the resident artist of Facebook. But Choe hated social media when he was first commissioned, which is pretty ironic, considering it took him from well-off artist to multi-million dollar artist.

But Choe did talk about his gambling with Howard Stern, saying that he used to take hundreds of thousands of dollars to Vegas, stuffed in pillowcases. Sometimes he lost, and sometimes he won. Huge. "I like to gamble," he told Stern. From the sounds of it, that's an understatement.

Now that he's able to commission private jets, Choe hopefully isn't carting his millions to Vegas to toss down at a blackjack table. He held his first New York solo exhibit, called Gardeners of Eden, in 2007 at Jonathan Levine Gallery in Chelsea, and his work has only skyrocketed in price since. There's even a documentary called Dirty Hands: The Art & Crimes of David Choe that chronicles his life from 2000 to 2007.

Some artists thrive on anonymity and privacy, and Choe seems to struggle with the age-old issue of art versus commerce.

"You end up losing the freedom, and then you're like, wait, it's the whole more money/more problems thing," he told Complex. "What people don't understand is that the things I value, like time… yeah, I pay for first class or private jets, anything that makes me get to where I need to go faster – that's where I'll spend my money. But if we were in L.A. right now, I live in the same house, I've never bought a new house, and I drive the same car."

Chances are Choe can get any car he wants at the moment, thanks to his own talent and $200 million Facebook jackpot. He may have despised social media back in 2005, but it definitely made him a wealthy man. And he's now on Twitter, Instagram, and Facebook. A guy's got to change with the times – especially if the times are making him very, very rich.