By Brian Warner on January 20, 2018 in Articles › Entertainment

A new Lamborghini and Range Rover in every driveway, pet tigers wearing diamond necklaces, $500 million private jets, oil gushing out of the ground with a slight pin prick, wiping your bottom with $100 bills. Gold-plated…everything. This is probably how most of us picture average daily life in Saudi Arabia. And while that description is an exaggeration for most of the country's 28 million citizens, a small percentage of Saudis actually might call that reality. In fact, my description might not be gaudy enough for these chosen few. The vast majority of these ultra-wealthy Saudi citizens are members of ONE family. A family that controls literally trillions of dollars worth of oil and cold hard cash. A single family that can send world economies soaring or tumbling with the push of a button. This is the story of the origins of the House of Saud. AKA the Saudi Royal Family. AKA the luckiest group of people on the planet.

First off, this is what Saudi Arabia's capital city of Riyadh looks like today: 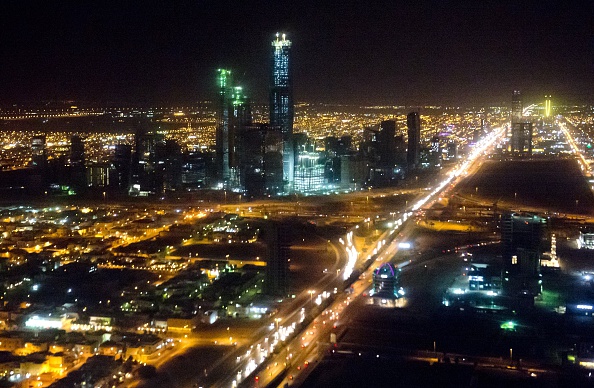 And this is what Riyadh looked like 100 years ago: 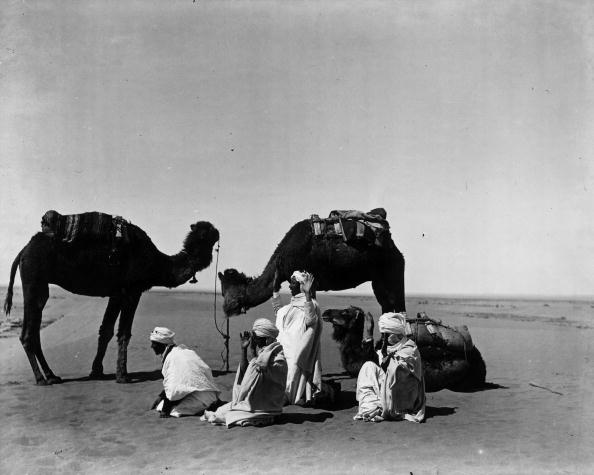 As a matter of fact, the above photo is what Saudi Arabia looked like for pretty much all of human history, prior to 1948.

A Brief History Of The House of Saud

The first Saudi dynasty was founded in 1744 by Muhammad bin Saud at a time when most of the region was loosely controlled by the Ottoman Empire (modern day Turkey). Muhammad bin Saud gained a groundswell of popularity and power after aligning with an influential religious leader named Muhammad ibn Abd al-Wahhab. Together, the two men established a political movement called Wahhabism that was based on a puritanical form of Sunni Islam. They established their base in the city of Riyadh, but the "Saudi" state expanded rapidly to control most of the territory that today encompasses Saudi Arabia. The first Saudi state lasted until 1818, when it was destroyed by Egyptian-based Ottomans. Over the next 50 years, the Al Saud clan fought bitterly with a rival family but they were eventually defeated and driven to exile in what is now Kuwait.

At the beginning of the 19th century, "Arabia" was little more than a loose patchwork of territories controlled by various tribal leaders. In 1902, Muhammad bin Saud's great-great-great-great grandson Abdul Aziz, who would later be known as Ibn Saud, led a group of family members in recapturing control of Riyadh. Ibn Saud's influence spread quickly with the help of tribal leaders who were sympathetic to his goal of driving out the Ottomans and unifying Arabia under Wahhabism.

Ibn Saud and his upstart forces were not the only foes attacking the Ottoman Empire at the time. In 1916, the Ottomans were also in the midst of fighting the British during World War I. Seeing it as a way to weaken the Ottomans, the British gave Ibn Saud support and encouragement to form a unified Arab state. Over the next 10 years, Ibn Saud fought off a series of internal and external forces who opposed his plans. In 1926, Ibn declared himself King of the Hejaz, an area in Western Arabia. A year later he declared himself King of Nejd, Arabia's central region.

Finally in 1930, Ibn Saud's forces defeated their largest rival after a brutal two year battle. With the victory, Ibn united the Hejaz and Nejd regions as the Kingdom of Saudi Arabia. He also executed every male member of his rival clan. On September 23, 1932, Ibn Saud officially crowned himself King of Saudi Arabia. 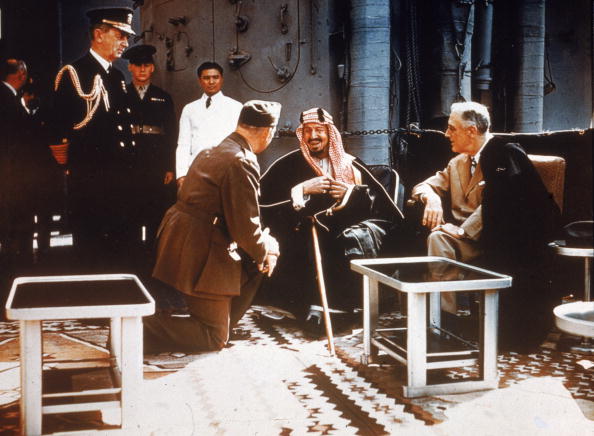 The Poorest Country in the World

Ibn Saud finally had a Kingdom his great-great-great-great grandfather envisioned 150 years ago, but there was one big problem: After decades waging war to unify a mostly uninhabitable swath of desert that could barely sustain a cactus, the royal family was broke. Actually, the entire Kingdom was basically destitute. Most Saudis, including the royal family, subsisted off extremely limited agriculture and some minor tourism revenues from people making Islamic pilgrimages to Saudi landmarks like Mecca. It also didn't help that the entire world was reeling from the Great Depression. All of a sudden, Muslim people from other countries couldn't afford to make the pilgrimage to Saudi Arabia's holy sites.

Ibn Saud and his family were desperate. They needed a lifeline, and they hoped that lifeline might be oil. World War I had proven beyond a doubt that oil was going to be the most important natural resource on earth for the foreseeable future. At the time, thanks to discoveries in Texas and the mid-west, the United States was the world's leading producer of black gold. In fact, significant quantities of oil had not been discovered anywhere in the Middle East at that time. Modest outputs were discovered in Persia (modern-day Iran), and Bahrain, but the geological community's general consensus was that there was no oil in Saudi Arabia. This opinion further discouraged foreign banks from making loans to companies that might have been otherwise interested in conducting oil exploration within the Kingdom.

On the other hand, there were persistent rumors and local legends that oil had been seen seeping out of the ground in some extremely remote Saudi villages. So the Kingdom pressed ahead. Starting in 1935, a joint partnership between Standard Oil and the Texas Oil company called CALTEX began drilling near a desolate eastern-Saudi village called Dammam. After three years of constant problems and setbacks, CALTEX made a discovery that would change the Kingdom of Saudi Arabia, the Middle East, and the world, forever.

Oil was discovered in Dammam on March 3, 1938. It was incredible luck, but the royals still had no idea how much more oil they might find. For all they knew, Dammam would be their only discovery.

In 1949, American oil explorer Jean Paul Getty made an investment that most people thought was certifiably insane. Getty took $9.5 million of his own money (roughly $100 million today) and purchased a 60-year exclusive lease to search for oil in the eastern region of Saudi Arabia. Getty then spent an additional $30 million of his own money ($300 million today) searching his claim for black gold. In 1953, the gamble paid off ENORMOUSLY. From that point forward, his little tract of worthless land would go on to produce 16 million barrels of oil every year. Thanks to his Saudi fields, Getty would soon become one of the first human beings to possess a billion dollar fortune, without adjusting for inflation.

Then came the Ghawar oil field, which began full-time production in 1951. That field turned out to be the largest single deposit of crude oil on the planet. During its lifetime, Ghawar is expected to produce 75-83 billion barrels of oil. Today, six of the world's 30 largest oil fields are located in Saudi Arabia. 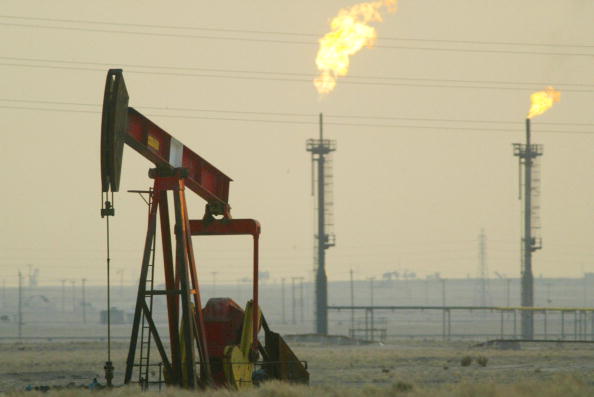 As you probably guessed, over the next 50 years Saudi Arabia quickly grew into one of the largest, wealthiest and most powerful countries in the world. Ibn Saud ruled the Kingdom until his death in November 1953. Ibn Saud was survived by 36 sons (he had 45 sons but some died before reaching adulthood) and an unknown number of daughters. He had 22 wives.

The crown passed to four of Ibn's sons before landing on the head of the current King of Saudi Arabia, Abdullah bin Abul Aziz. King Abdullah is the leader of a royal family that has grown to include an estimated 15,000 extremely wealthy princes, cousins, wives, brothers, etc… 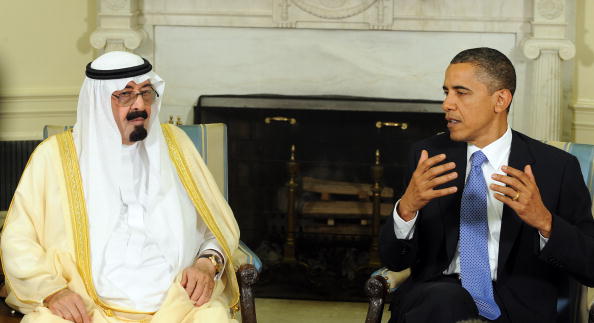 Today the extended Saudi Royal family controls an estimated $1.4 trillion. And amazingly, it is believed that the vast majority of this wealth, is controlled by just 2000 people. King Abdullah himself is personally worth $18 billion, making him the 58th richest person on the planet. Saudi Prince Alwaleed Bin Talal Alsaud, a grandson of Ibn Saud and nephew of King Abdullah, is worth $30 billion, making him the 19th richest people in the world.

All members of the Al Saud family are entitled to receive monthly stipends generated by oil revenues. The entire distribution process is managed by finance ministry's Office of Decisions and Rules. The amount of the stipend depends on an individual's family distance to the King. A lowly member from a distant branch of the family might earn as little as $800 a month. More prominent members of the family earn hundreds of thousands, even millions of dollars every month. Like any corporation, at the end of the year family members get bonuses based on that year's profits. Every year, the Office of Decisions and Rules distributes between $20 and $40 billion in the form of stipends and bonuses.

King Abdullah died in January 2015 at the age of 90. According to Saudi royal laws, the crown passes to the next son of Ibn Saud, not one of Abdullah's own sons. He was therefore succeeded by his 79 year old half brother Crown Prince Salman.

So there you have it. That's pretty much everything you could possibly want to know about the origins, wealth, power and succession of the House of Saud. AKA the Saudi Royal Family. AKA the luckiest group of accidental trillionaires on the planet. Now if you'll excuse me, I'm off to Riyadh to make a Saudi Princess fall in love with me.