Against All Odds: How The Red Hot Chili Peppers Became One Of The Most Successful Rock Bands Of All Time

By Max Savage Levenson on January 28, 2014 in Articles › Entertainment

When they weren't busy stuffing their genitals into tube socks, firing and re-hiring each other, developing heroin addictions and going in and out of rehab, somehow The Red Hot Chili Peppers have managed to grow into one of the most commercially successful rock bands of all time. Unlike most bands that have had equally long careers, The RHCP are not simply a pale version of their former glory and relevance. In terms of music, they are still just as relevant today as when they first started out. This is especially shocking when you consider the fact that The Peppers have been able to sustain a thirty-year career in the face of every conceivable obstacle planet earth can throw. They'e lost friends, battled demons, started families and even dabbled in the acting world. Along the way, they have also earned hundreds of millions of dollars. On Sunday, February 2, 2014 the band will take the stage to play Super Bowl XLVIII in front of a worldwide audience of more than 100 million people. The Red Hot Chili Peppers are nothing if not a band of survivors, and this is their story. 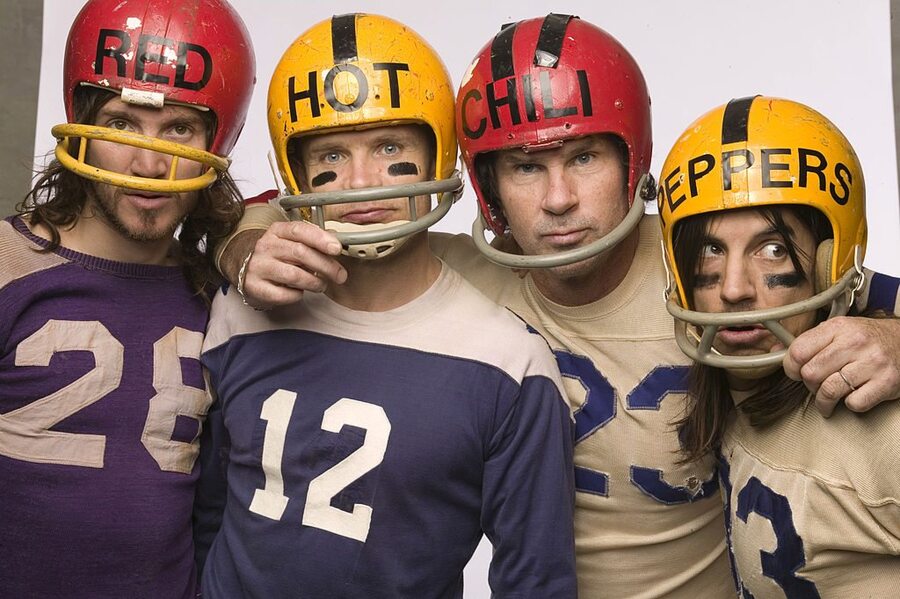 The Peppers formed in 1983 when four friends who met at Los Angeles' Fairfax High School set out to create a band. Vocalist Anthony Kiedis, bassist Michael "Flea" Balzary, guitarist Hillel Slovak and drummer Jack Irons played their first show to approximately thirty people at a club on the Sunset Strip, going by the silly moniker Tony Flow and the Majestic Masters of Mayhem. Over a raucous funk-punk improvised jam, Kiedis read a poem of his, "Out in L.A." It seemed like things were off to a great start – the club, impressed by their energy, asked them to return the following week, and the group changed their name to the Red Hot Chili Peppers. 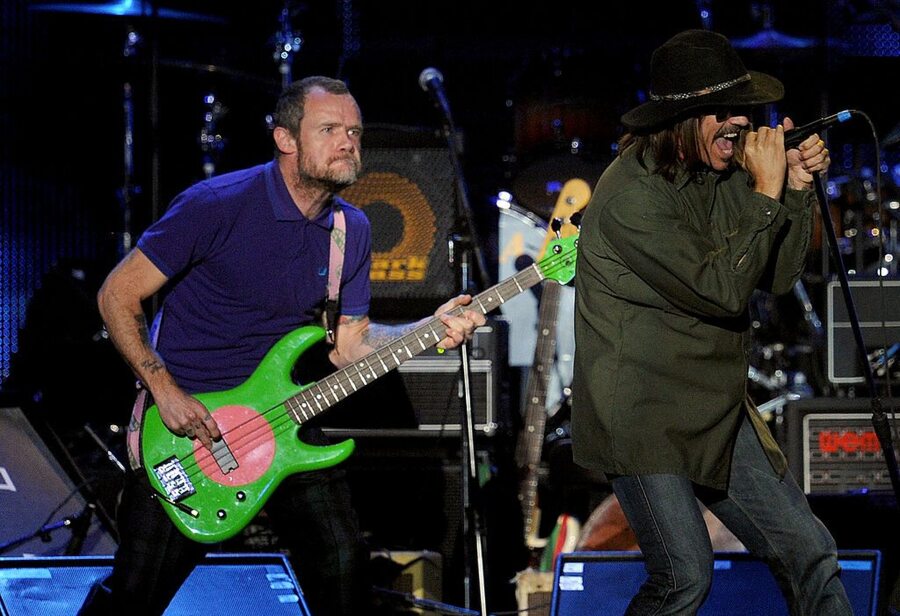 Setting a precedent for the entirety of the band's career, things got complicated quickly. With a little bit of local buzz and a new name, The RHCP signed a seven-album record deal with EMI in 1983. As crazy as it sounds now, original members Slovak and Irons, would leave the Peppers left by the year's end to focus on a band of their own called "What is this".

Over the next five years, the band experienced many ups and downs. They hired a new guitarist but fired him after their first tour. They soon re-hired Slovak and found a new drummer but fired him, too. They then re-hired original drummer Jack Irons. Along the way, Kiedis and Slovak both developed crippling heroin addictions. Around this time, the acclaimed LA music producer Rick Rubin turned down their first appeal to collaborate.

During this same time period The Peppers released three records: their 1984 self-titled debut, 1985's "Freaky Styley" and 1987's "The Uplift Mofo Party Plan". Their sound was developing to include elements of funk, punk and hard rock. Combined with their bombastic live performances, of which Kiedis remarked, "When you come off bleeding with bones poking out of you, you know that you put on a good show". The band won both critical acclaim and LA Weekly's "Band of the Year" award in 1987. Uplift Mofo peaked at Number 148 on the Billboard 200, and things were starting to look up.

The positive momentum changed quickly, however, when founding guitarist Hillel Slovak died of a heroin overdose on June 25, 1988. Kiedis left LA, refusing to attend his friend's funeral. Drummer Jack Irons quit the band and entered a depression that would affect him on-and-off for the next several years. Suddenly Kiedis and Flea were left wondering whether the band would cease to exist.

The dark clouds began to break when the remaining two Pepers met a virtuoso teenage guitarist named John Frusciante, who unlike Kiedis and Flea, knew his music theory. "He knows all the shit I don't know," the bass virtuoso Flea remarked later. The chemistry between them was top-notch, and the band went into the studio to record 1989's "Mother's Milk". That album hit #52 on the Billboard charts and featured the Chili Peppers' menacing, in-your-face take on Stevie Wonder's "Higher Ground", which peaked at #11 on the Modern Rock Tracks chart.

Suddenly Rick Rubin was interested, and signed on to produce their fifth album. With the addition of bike-dude drummer Chad Smith ("he lit a fire under our asses") the band was in a prime position to turn things up a notch. Something in Rubin's brain told him that this was a band that would jive well in a mansion once inhabited by Harry Houdini, and so they rented said mansion, which the band would later claim was haunted, had a team set up a recording studio inside, and banged out what would become "Blood Sugar Sex Magik". Creative juices were flowing like wine on Passover. Kiedis later said that every single day "there was music for me to lyricize."

Blood Sugar Sex Magik was a smash hit and would turn the Peppers into bona fide rock stars. "Give It Away." "Suck My Kiss." "Under the Bridge." Yep, all on Blood Sugar. "Give It Away" won a Grammy for Best Hard Rock Performance with Vocal. The record sold 13 million copies worldwide. 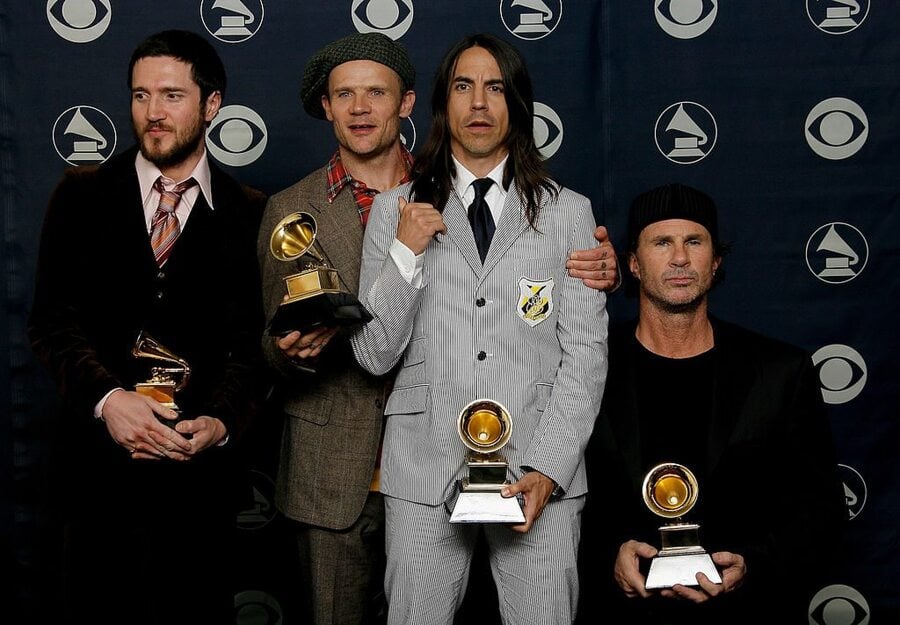 But unfortunately, all of this newfound uber-fame scared the crap out of Frusciante, who bounced from the band in 1992. He was briefly replaced by Dave Navarro, of Jane's Addiction / Carmen Electra fame. He stayed with the band long enough to record and tour on one record, 1995's "One Hit Minute". Problem was, Navarro wasn't really into funk music or jamming, and he never really clicked with the band. That album produced the hit "Aeroplane", but its overall tone was darker, especially in light of Kurt Cobain's recent suicide, the subject of the ballad "Tearjerker."

The subsequent tour was a mess. The band was physically and emotionally wiped out and eventually cancelled a bunch of tour dates. Navarro split in 1998. The band was, once again, on the verge of calling it quits, and doing whatever rock stars do when they are done being rock stars.

At this time, former band mate John Frusciante was deeply addicted to heroin, destitute and had lost contact with almost all of his friends. Flea told Kiedis that the only way that the band could continue was "if we got John back in the band". With Flea's help, Frusciante entered rehab, and upon his release, agreed to rejoin the Red Hot Chili Peppers. Kiedis said, "For me, that was the defining moment of what would become the next six years of our lives together… that the magic was about to happen again… we could all become players in that great universal orchestra again."

He wasn't joking, either. The next ten years saw the band at their creative peak, with a constant whirlwind of writing, recording and touring. 1999's "Californication" knocked everything that had come previously for the Peppers out of the park. Frusciante applied textured, beautiful guitar work, they slowed things down a bit and focused on melody while putting their funk-punk roots on the backburner. It sold over 15 million copies, the band's best-selling record to date. It was full of #1 hits: the slow-burning "Scar Tissue," "Otherside," and the record's melancholic title track. They toured on that thing for two years.

When they were done with the tour, they went right back into the studio and knocked out 2002's "By the Way", which was followed by an eighteen-month tour that culminated with three shows in London's Hyde Park, where 258,000 fans paid a whopping total of 17 million dollars to see the band rock out. 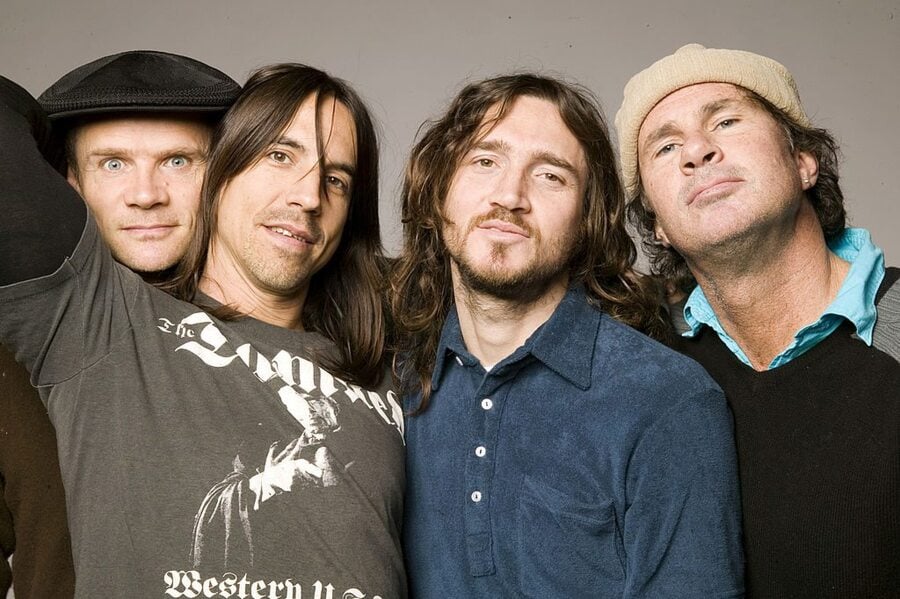 And just when you thought they might want to take a nap on the beach for one hot minute, the band was back in the studio, recording the double album "Stadium Arcadium". This album featured 28 songs of arena-ready rock and roll. "Dani California" was the band's fastest-selling single ever, debuting at #1 on the Modern Rock chart.

Then, in 2008, Frusciante left again to focus on his solo career, under far more amicable circumstances. He was replaced by Josh Klinghoffer, a friend of Frusciante's who had already been playing with the band on tour. The Chili Peppers took a couple years to regroup, but by 2010 they were recording I'm With You. The tour that followed brought in almost 34 million dollars.

At the band's headlining performance at Outside Lands festival in San Francisco this summer, not for one second would you suspect that these guys were pushing fifty. They made us giddy like high schoolers, and played with the energy of high schoolers, too, running through a glorious set of their greatest hits. If anyone is doubting that their Super Bowl performance will be anything other than a rock and roll spectacle, rest assured: the Red Hot Chili Peppers are still going strong. Always changing, always running up against challenges, these guys aren't giving up the fight anytime soon.