By Paula Wilson on June 25, 2014 in Articles › Entertainment

Adam Sandler is sort of an acquired taste, like blue cheese, or pickled pig's feet.  It's difficult to define why he, of all the millions of actors and actor-comedians out there, has continued to be able to churn out films at such a surprising rate.  And despite the fact that most (all) of his recent releases have been arguably horrendous, he consistently still earns $20+ million per movie. Sandler currently has a net worth topping $300 million dollars. How does he do it?  Does he have dirt on some of Hollywood's elite executives?  Did he sacrifice a special chicken to the movie gods?  It doesn't seem to matter whether his movies are good or bad, he is always in the process of making another.  How can this be possible? Well, it turns out the answer is fairly simple, and relatively unsurprising.  Adam Sandler continues to make movies, because no matter how bad they are, those movies keep making money.  A ridiculous amount of money in fact. Here's how Adam Sandler became Hollywood's most unlikely money-making machine.

Adam Sandler was born on September 9, 1966 in Brooklyn, New York.  He grew up in Manchester, New Hampshire, and then went on to attend New York University's Tisch School of the Arts.  While in college, he began performing stand-up, and also appeared on "The Cosby Show", playing one of Theo Huxtable's friends.  While in Los Angeles performing stand-up, Dennis Miller caught his show, and introduced him to Lorne Michaels of "Saturday Night Live".  He began writing for "SNL" in 1990 and then began appearing on the show as a featured player a year later.  He and Chris Farley were both fired in 1995.  In the meantime, he began appearing in film projects, including "Coneheads", "Airheads", and "Billy Madison".  His early films were critical flops and only moderately successful in the box office.  However, in 1996, he scored a hit with "Happy Gilmore" and followed it up with "The Wedding Singer", "The Waterboy", and "Big Daddy", all of which did fairly well.  In 1999, he launched his own production company, Happy Madison Productions.  He has produced every one of his projects since then in partnership with Sony Pictures.  So what makes him so special?  It's a combination of budget vs. profit and what we'll call "the genuinely nice guy factor". 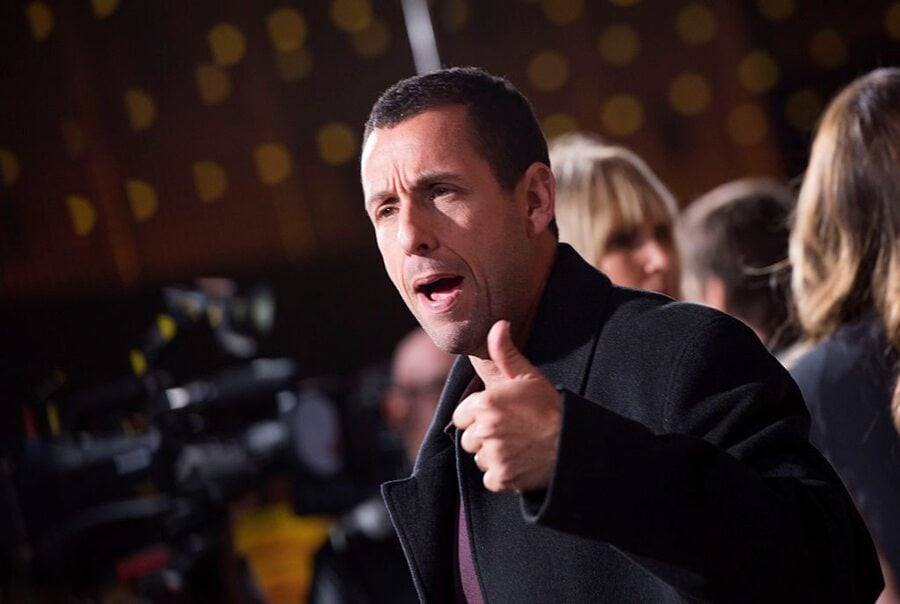 For Sony, working with Adam Sandler is basically a big pile of win.  He has a huge fan base and a great stable of actors from his "SNL" days with whom he works repeatedly.  His production company, which is now 15 years old, runs like a well-oiled machine.  More importantly, he's genuinely liked, by just about everyone.  While critics may not like his movies, they all like him, the nice guy from New York with the non-crazy family, who makes gently dumb movies.  Yes, other actors might bring in a bigger box office, but their fees are also higher, as well, and they'll most likely bring some diva attitude with them.  Sony doesn't have to worry about any of that with Adam Sandler, or the men and women who work for him.  Or, as Ken Miyamoto, a former Sony employee put it, "He's amazing to work with."  There's something to be said for being a consummate professional and down-to-earth.

Just being a nice guy isn't his only asset though.  It's also his numbers at the box office.  Since the reviews for his films are often mixed at best, it's easy to overlook the fact that large numbers of people go to see his projects. To date, Sandler's movies have earned approximately $3.9 billion dollars at the worldwide box office.

There's definitely a formula at play with most of the films that come out of Happy Madison Productions, and that formula serves as a comedic security blanket for audiences that are often bombarded with a dizzying array of film choices.  When in doubt, most moviegoers will choose the film that they know will at least guarantee a pleasant evening at the movies.  That's the audience to which Adam Sandler caters.  Here's a breakdown of the last few years of Happy Madison projects by the numbers.

Love his work or hate it, it's clear Adam Sandler has some major box office mojo.  When Sony needs a pick me up, all they need to do is ring the Sandman and then ring the cash register.  With that track record of success, it's no wonder they keep supporting his projects.  Adam Sandler's films may not be highbrow, but why fix something when it ain't broke?