It's no secret that real estate in New York City is crazy expensive and getting more expensive by the day. Now, a condo has been purchased for a truly staggering price tag of $180 million—almost double the $100.5 million price tag of the former most expensive property in the city. Michael Dell bought that property – a luxury condo at One57 in 2014.

The $180 million condo is a five story penthouse in The Crown building. The Crown is directly across the street from Trump Tower. Even more unbelievable, it will be the owner's second home. Just how much is their primary home worth?!

The Crown Building is distinctive for its gilded roof. It was originally known as the Heckshcer Building. It was completed in 1921. The building is 26 stories high. The name of the building was changed to the Crown Building in 1983. It's most famous owner is former Phillippine President Ferdinand Marcos. He bought the property in 1921. 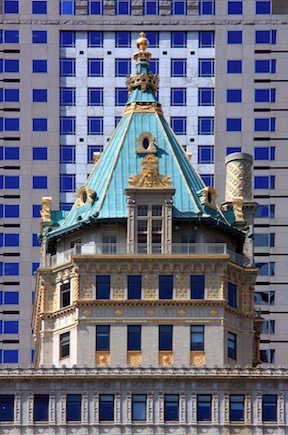 Naomi Campbell's ex, Russian billionaire Vladislav Doronin, through his OXO group, is creating 26 condos that start on the fourth floor of the building. An 83-room Aman Hotel will also be housed in the Crown Building. The Aman Hotel will feature a member's club, jazz club, cigar bar, and various restaurants.

The buyer is rumored to be a European investor with multiple homes across the globe. The 14,000 square foot condo is a bit more that 3,000 square feet bigger than Trump's condo across the street. The Crown unit comes with a dedicated elevator from the lobby to the penthouse and a private rooftop pool – just one of the two pools planned for the unit. The floor plans for the five-story penthouse features an indoor and an outdoor pool, a piano lounge, game room, two kitchens, steam room, and wraparound terrace.