By Brian Warner on January 25, 2015 in Articles › Entertainment

He buys cars like most of us buy eggs (12 at a time). He hasn't set foot on a commercial plane in over a decade. He proudly keeps $125 million cash in his checking account. The life that Floyd Mayweather leads is crazy enough to impress an Egyptian Pharaoh or a Roman Emperor. But is his life really that crazy? Is it all a front for his millions of followers on Instagram, Twitter and YouTube? What's it like living in Floyd's world, day-to-day and behind the scenes? Well, thanks to a new tell-all book by his former assistant, Tasha Robinson-White, we now have a pretty good idea. The book is called "Right Hand to the Champ: 13 Lessons that Changed My Life." And the life it describes is even crazier than you'd ever imagine.

For 12 years, Tasha Robinson-White was Floyd Mayweather's right hand woman. They met in Las Vegas back in 1998. At the time, Floyd was a 21-year-old up-and-comer in the boxing world and Tasha was working as a one of Vegas' top club promoters. Floyd was continually impressed by the way Tasha was able to pack clubs every week with the world's hottest celebrities. She was clearly a go-getter with her finger on the pulse of Las Vegas nightlife and power structure. They also bonded over having roots in Michigan, Floyd being from Grand Rapids and Tasha from Saginaw. Bottom line: Floyd needed her in his crew, so what did he do? He made Tasha an offer she couldn't refuse. 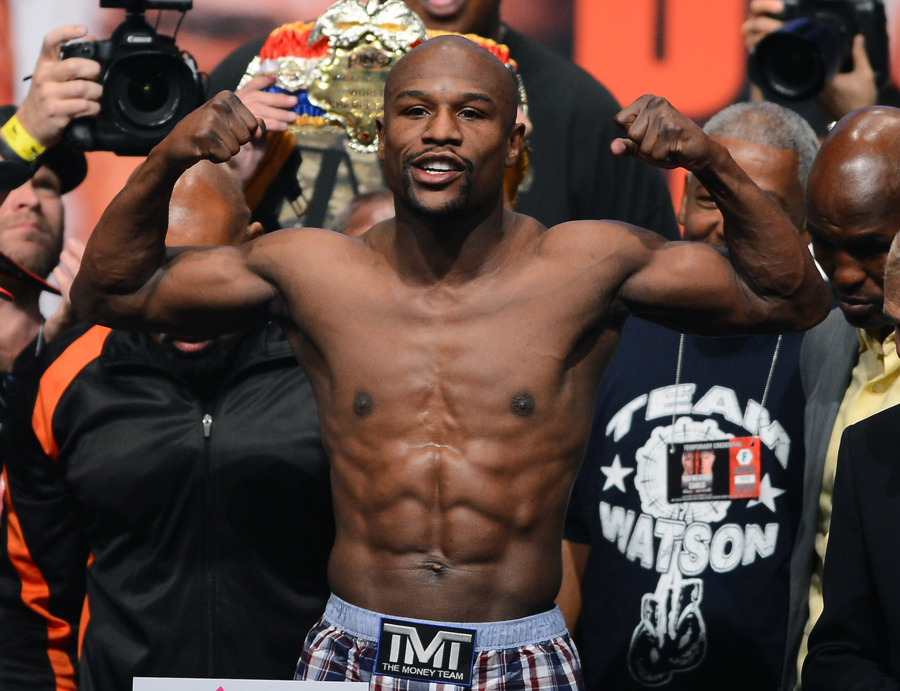 Around the time they first met, Floyd had become obsessed with the idea of starting his own record label. He was infatuated with artists like 50 Cent, Dr. Dre and Jay-Z, all of whom transformed themselves from rappers to business moguls. Floyd set out to launch his own music label he appropriately named "Philthy Rich Records." Tasha, who had worked in the record industry before moving to Vegas, was the perfect person to get his label off the ground.

Unfortunately, Floyd's record label didn't end up being very successful. According to Tasha, the plans were hastily thrown together and not very well thought out. Also, Floyd wasn't around enough to make decisions, yet he demanded he be involved in all of the decision making. Not a good combination. To make matters worse, when Floyd was training for a fight, everything else would stop for months at a time.

Despite that early disappointment, he was still impressed with Tasha and decided to put her in charge of all of the day-to-day operations in Floyd's world. One of her most important responsibilities was driving to the bank roughly once a day to withdraw massive amounts of cash. Some of this cash was used to pay staff and some of it was given to friends and family. Floyd also put thousands of dollars into the accounts of friends who were serving time back in Michigan, and he did so every month.

Tasha drove Floyd's cars around so much she needed to be named on his insurance plan. After a while, Floyd got sick of her borrowing his cars all the time, so he bought her a Mercedes. According to the salesman, Tasha's car was the 33rd Benz Floyd had bought from that particular dealership.

Technically, Tasha had two job titles. She was "CEO of Mayweather Music" and "Founding President of the Floyd Mayweather Jr. Foundation." She was paid a salary of $8,000 per month (usually in cash) and could earn an annual bonus between $20,000 and $100,000. Not a bad gig!

On the flip side, Tasha admits that often, getting Floyd to actually pay salaries was a challenge. His staff would sometimes go months without getting paid, depending on the champ's mood. They put up with it because at other times, he was extremely generous. And when they complained about not getting paid, Floyd would be flabbergasted. He just bought them all Rolexes a week ago! How come they're mad they aren't getting paid this month??? 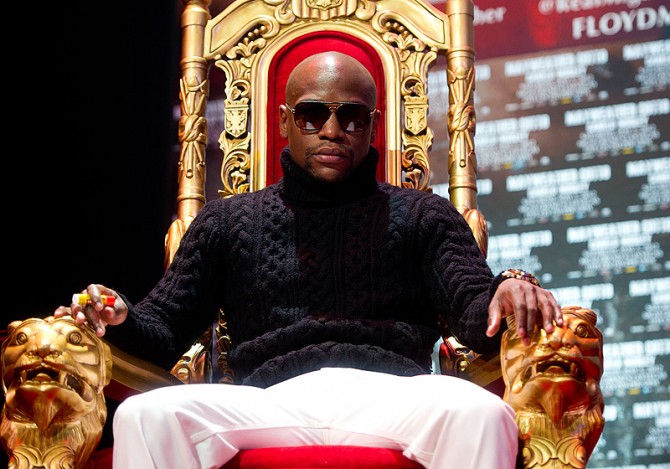 – When he's not training for a fight, Floyd stays up every night until 6am. He then sleeps in till 3pm, at which point he spends two hours showering, dressing and grooming himself. Part of his grooming routine involves strictly shaving off every piece of body hair. Then, every day at around 5pm, Floyd and Tasha would drive in separate cars to Bank of America where he would withdraw around $100,000 in cash on average.

– Floyd doesn't like credit cards. At all times, one of his bodyguards is tasked with carrying around what they called the "pregnant bag." They called it "pregnant" because it is always bulging with cash. Whenever he would drive, the pregnant bag always sat up front. Other passengers literally had to take a back seat.

– He once bought seven luxury cars in a single day.

– He once spent $2 million on jewelry in one day.

– He travels with a minimum of three women at all times, mostly strippers. Wherever he lands, he is greeted by 7-10 strippers who have been pre-screened by a member of his entourage.

– His house staff is given strict instructions to clear out his entire closet every 60 days.

– He discards his clothes after one use.

– He's OCD with germs. He employs a full-time house cleaning staff that sanitizes everything in his mansion once a day. One full-time staff member is tasked with cleaning his cars (with unusual attention given to the steering wheels) every single day so his cars are always ready to be driven. Floyd even takes his own silverware (usually gold or platinum engraved) to restaurants when they eat out.

– When they travel, his entourage flies in their own private jet, because Floyd is worried that his bodyguard's weight will make his plane unsafe.

Between 2006 and the end of 2008 alone, Floyd earned approximately $60 million in boxing purses plus a one-time $20 million fee to appear at Wrestlemania. He was 31-years-old and richer than he could ever have imagined, so he announced his retirement.

But despite his fortune, according to Tasha, no amount of money was ever enough. The more money Floyd made, the more he became obsessed with being even richer. He wasn't happy being a millionaire, he was suddenly obsessed with becoming a billionaire. He was so obsessed that he started to let his guard down with new entourage members. The worst example involved a man named "Three Comma Joe." Three Comma Joe somehow convinced Floyd that he was on the verge of a massive opportunity. All Floyd had to do was invest $15 million, and it would turn into $5 billion within a few months–a year at most.

Floyd bought the pitch hook, line, and sinker, and quickly wired $15 million to a Canadian bank.

After a few months had passed, Joe was suddenly nowhere to be found. He vanished from Vegas and stopped returning Floyd's calls. Floyd hired a team of private investigators to hunt him down with no results. He even sent a group of bodyguards to an address in Vancouver that was supposedly Three Comma Joe's attorney's office. The address was completely fake.

It gets worse. In August 2008, just a few months after being scammed out of $15 million, thieves broke into Floyd's Vegas home and stole $7 million worth of cash and jewelry. Then the IRS came knocking. The feds claimed that Floyd owed more than $6 million in unpaid taxes.

That's a $28 million hit in the span of six months. These events essentially wiped out all of the money Floyd had earned up to that point after taxes, fees and his expensive lifestyle. Floyd was forced to come out of retirement and step back into the ring.

It was an extremely tough period for Floyd and members of his entourage. Floyd became paranoid about everyone in his world. At one particularly low point, he locked a former girlfriend (whom he suspected she was involved with the jewelry heist) in his home theater for 48 straight hours. He reportedly parked two bodyguards at the front door and physically threatened her for hours on end in rambling fits. If she tried to leave, Floyd allegedly said he would cut off all her hair and let his bodyguards have their way with her. When Tasha came over to the house and discovered what had been going on for the last two days, she eased the tension and found a way for the girl to sneak out while Floyd was sleeping.

After the incident with the girlfriend, Tasha quit. It was April 2009, and she had spent the last 12 years living in Floyd's world. 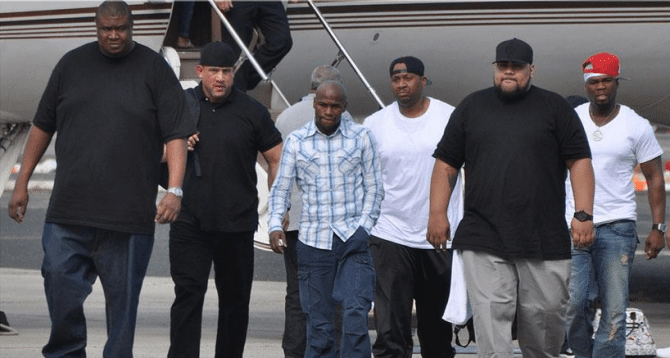 Which one is Turtle?

Tasha and Floyd remained friendly even after she quit, although their relationship fluctuated along with his mood swings. When Tasha's father died, Floyd called and gave his condolences. He also offered to pay for the funeral and wired Tasha $9,000. On the day of the funeral, however, Floyd changed his mind. He called Tasha and angrily demanded that she return the money. Tasha's own words about the event:

Through all the ups and downs, Floyd kept bringing home massive paychecks. Between 2009 and 2012, he earned $135 million in the ring. To date, Floyd has earned a total of $405 million fighting in the ring. He is consistently the highest-paid athlete in the world every year, even without any meaningful endorsement contracts.

Some of Floyd's more bizarre personality quirks aside, who are we to judge his lifestyle? Sure, it would be nice if he acted a little more humble with his good fortune, but it is his money. He earned it, so he can spend it however he wants.

On the other hand, boxers are especially notorious for blowing through massive fortunes. Both Mike Tyson and Evander Holyfield squandered several hundred million dollars yet ended up flat broke.

Where do you think Floyd will be in 10 years? Still the money king, or flat broke?

Hat tip to the Daily Mail for getting an exclusive interview with Tasha. And if you want to buy Tasha's book, "Right Hand to the Champ: 13 Lessons that Changed My Life," it is available on Amazon right here.