Look out Paris and Kim, there's a new heiress in town: Petra Ecclestone

By Simon Gerard on August 19, 2011 in Articles › Entertainment

In the ongoing cold war being waged over the precious resource known as "attention" there were only two opposing forces: The Hiltons versus Kardashians. Now it seems there is a new foreign competitor vying for control: the Ecclestones! Armed with an even richer daddy, Petra and Tamara have their money missiles aimed directly at American television.Petra Ecclestone, while the younger of the two sisters, appears to be the mastermind spearheading the operation, starting with a strategic invasion of The Hills. 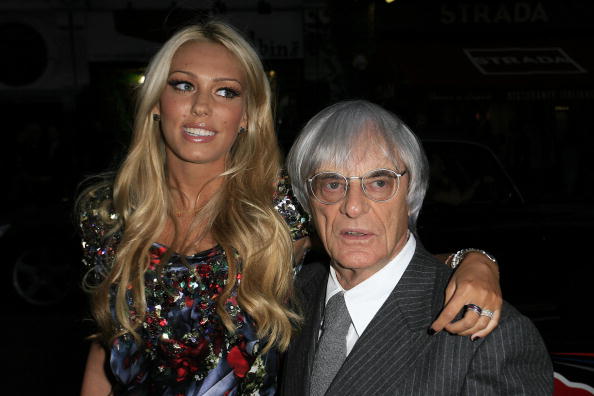 For those who haven't heard of Petra, you may have heard of her father, Bernie Ecclestone. He's a British sports entrepreneur and multi-billionaire. Born in 1930 in Suffolk, England, he got his start in F1 racing before being injured in a crash. He then focused his time and energy into race team management. He's now president and CEO of Formula One Management and Formula One Administration. He also is part owner of Alpha Prema, the parent company of the Formula One Group. He's considered the figurehead of the massive F1 organization and is often referred to in UK tabloids as "F1 Supremo".

Bernie married Croatian model Slavica (who is around a foot taller than Bernie at 5′ 2″ and almost 30 years younger). Sure it's pretty funny to see, but he's got mad clout going for a much taller woman when he's got plenty of options with his success. It all worked out in the end, because he had two super model tall girls. Her older sister, Tamara Ecclestone is also a model and has plans for an upcoming reality TV show.

Petra, 23, has made her first headlines in the States by picking up Candy Spelling's old mansion for a cool $85 million. Listed as the most expensive house in America at $150 million, how could you turn down those savings? Petra already holds a 9-figure net worth, To pick up her second home, she borrowed $82.4 million from her mom (she already has a $90 million zebra skin furnished home in England). Her mom wasn't too worried, with the $1 billion divorce settlement form Bernie, she pretty much just reached into her purse for it. Her new pad is 57,000 feet, including 14 bedrooms, 100 car garage, tennis court, bowling alley, pool, gift wrapping room, flower cutting room, a six acres lawn and, apparently, too many bathrooms to count. She has recently been auctioning off all the original decorations, ornaments and furnishings. Probably to get the old rich person smell out.

"As low key as I can be – I try" is what Petra said when asked about her upcoming wedding to businessman James Stunt. This follows her engagement party in May, where they had Rihanna choppered in from Paris to perform for $300,000. Serving only 'vintage' Cristal, decorations included a range of supercars, from classic Aston Martins, brand new Ferraris and even a wedding-white Bugatti Veyron.  Oh yeah, there was also a circus.

Her multi-million dollar wedding is set to take place in a 15th century Italian castle near Rome, the same one where Tom Cruise married Katie Holmes. Eric Clapton, a friend of her father, is set to perform their first dance song at around $300,000. The Black Eyed Peas are set to perform for almost a million dollars, solid proof that money can't buy good taste in music. The castle plus catering will cost over $300,000 and there will be a $50,000 fireworks display at midnight.

This is where it gets really scary, she is now threatening our way of life and the very fabric of our culture. Okay, not ours, just the world of ultra-rich socialite reality show stars. Petra now hopes to launch her own reality show, starting with plans to throw a huge celebrity bash at her new pad, to welcome herself to Hollywood. No word if she will be serving Kalua-roasted Kardashian for dinner.