By Brian Warner on November 29, 2012 in Articles › Entertainment

We here at Celebrity Net Worth love music. But, as you probably know, we tend to only focus on the biggest artists in the world with articles like the highest paid musicians of the year and the richest rappers in the world. But there is so much other good music out there! So we decided to launch a new article series about our favorite up and coming musicians called Cool New Music Spotlight. Let us know via Facebook or email if you ever have any suggestions for future posts! We are all ears. Today we are focusing the spotlight on one of my personal favorite up and coming bands, Capital Cities. 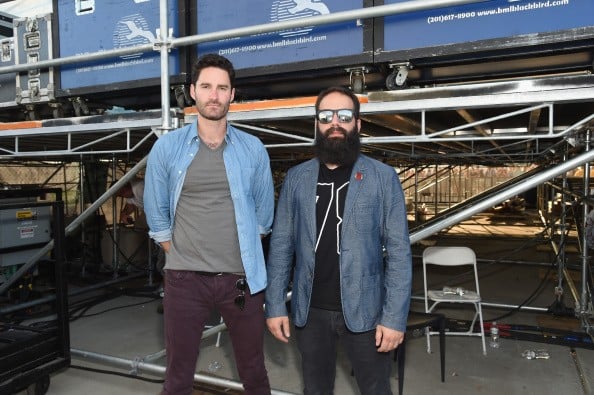 Capital Cities is an LA based electro-pop band headed by two lead singers, Sebu Simonian and Ryan Merchant. The duo is backed by a group of equally talented musicians including a trumpeter who has the habit of stealing their live shows, in my opinion. Sebu and Ryan take turns on vocals and on keyboards where they pump out some insanely catchy songs that are starting to climb your local radio station's charts. If you haven't heard them yet, you will soon because Capital Cities just signed a deal with Capital Records (appropriate) and are about to record their first full length album. In the mean time, you can find some of their best songs for free on Spotify and their website CapitalCitiesMusic.com. Their single "Safe and Sound" is incredibly fun and catchy as is "I Sold My Bed, But Not My Stereo". Check them out, but be warned Capital Cities will be stuck in your head for days.

The song I think Celebrity Net Worth readers would particularly enjoy is called "Breathe". Breathe mixes Pink Floyd and Tupac Shakur to create an extremely cool and funky beat that is guaranteed to get your head nodding. I don't want to say much more just take a listen (Tupac comes in at 1:15)…

I can also say from experience that Capital Cities is one of the best live shows you'll ever see. I've seen them twice now and each show was one of the most fun music experiences I've ever had. When the guys are done with their album, I highly recommenced catching a live show, you won't be disappointed. If you happen to be in the LA area tomorrow night, Capital Cities is playing a show at The Roxy Theater to celebrate their record deal. I'll be there tomorrow night. They are also playing Costa Mesa December 15th, San Francisco December 20th and Sacramento December 21st. Full details on CapitalCitiesMusic.com.

Take a listen and let us know what you think. And like I said, if you have any suggestions for future Cool New Music Spotlight article subjects, let me know via Facebook or Google+!