By Paula Wilson on June 5, 2016 in Articles › Entertainment

(This article was originally published in December 2013. Reposting in honor of Muhammad who just passed away. Rest in peace)…. In our culture, professional athletes at the top of their game tend to take on mythic status levels.  They seem able to harness a type of energy, stamina, charisma, and power that the average person could only dream of posessing. And while many athletes inspire immense loyalty in their legions of fans, very few have achieved the almost God-like following that Muhammad Ali has enjoyed for the last several decades.  Ali polarized audiences as much as he awed them, and his legacy of boxing excellence, combined with his innate charisma, is still the benchmark against which all other boxers are judged.  At the height of his popularity, he lived like a king, and his circle of admirers included dignitaries and powerful businessman from all over the globe.  Ali retired from boxing in December of 1981, but his legend is just as strong today 30 years later with a net worth of $50 million. This is the story of how Muhammad Ali became arguably the greatest athlete of all time.

Muhammad Ali was born Cassius Marcellus Clay, Jr in Louisville, Kentucky on January 17, 1942. Interestingly, his boxing career may never had happened without a neighborhood thief. When Cassius was 12 years old, someone stole his bike. The robbery left Cassius fuming. He swore up and down the neighborhood that he was going to "whup" the thief. When a policeman overheard the screaming rants, he suggested that Cassius better learn how to box before seeking out revenge.  Cassius took that police officer's suggestion to heart, and immediately began training.

As a young amateur boxer, Cassius went on to dominate the sport in Kentucky, winning six Kentucky Golden Gloves titles.  He also made a name for himself nationally, winning two national Golden Gloves titles, the Amateur Athletic Union National Title, and most famously, the Light Heavyweight Gold Medal at the 1960 Summer Olympics.  He fought in 105 bouts as an amateur boxer, and won 100 of them. 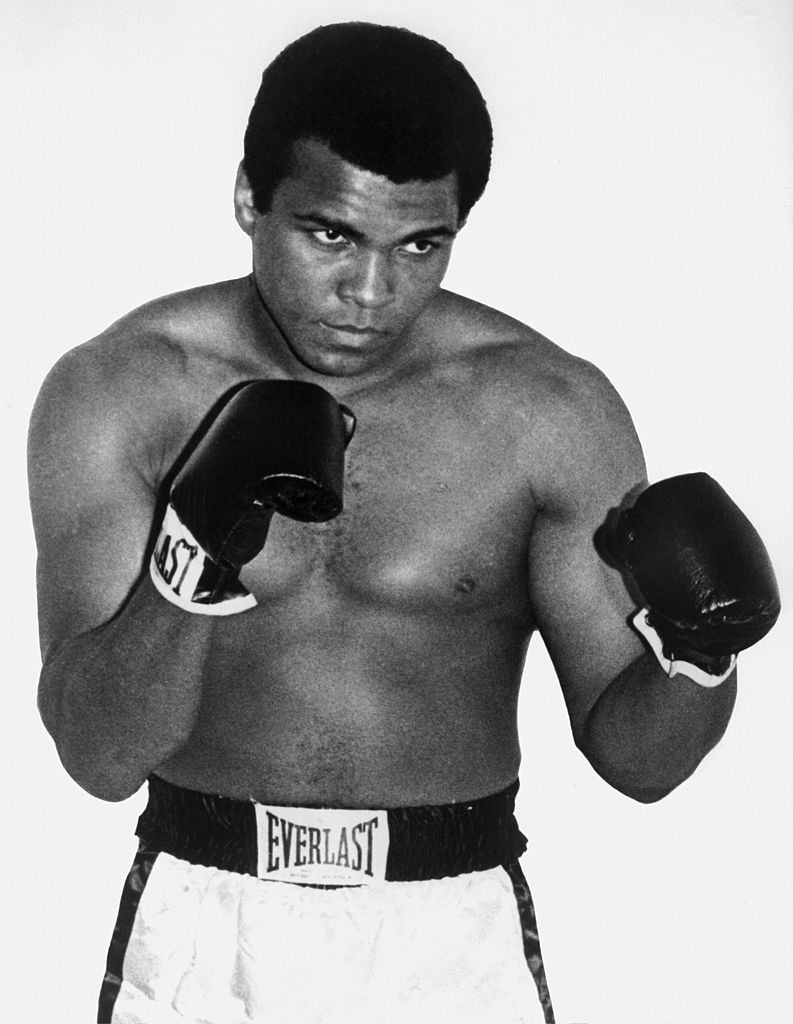 After the Summer Olympics win, the only place to go was professional boxing.  Cassius Clay debuted in October of 1960, and won his first fight in six rounds.  Over the course of the next three years, he won everything.  He fought 19 times and won 19 times, 15 of the wins by knockout.  His only obstacle to total domination was the very intimidating, and very undefeated, Sonny Liston.  In February 1964, the two met for a fight that everyone thought would be a bloodbath… with Clay doing all the bleeding.  Known for "trash talking", Clay was not particularly liked by anyone, even though everyone agreed that he was a charismatic and impressive boxer.  He took his taunting to a whole new level during the weigh-in with Sonny Liston, shouting the now famous promise to "float like a butterfly and sting like a bee", among other seemingly foolhardy boasts.  Everyone expected the bout to end quickly.  It didn't.  Cassius Clay shocked everyone by dominating the first three rounds.  He battled through blindness in the fifth round, due to what many believe was an irritant smeared on Liston's gloves, and then bounced back in the sixth round.  Liston was unable to continue in the seventh round, and Clay was declared the winner.  He was the Heavyweight Champion at age 22.

That same year, Cassius Clay chose to convert to the Nation of Islam, and subsequently changed his name to Muhammad Ali.  Though he had been interested in joining the religious organization for years, they were unwilling to accept a famous boxer into their ranks.  They changed their minds after he beat Sonny Liston, and for the next ten years, Muhammad Ali used his boxing press conferences and interviews to discuss his thoughts on Vietnam, interracial marriage, integration, and the white man as "the devil".  His views did not make him popular with anyone, and he further courted ire when he began taunting his opponents in the ring.  In a fight against Floyd Patterson, he didn't even throw a punch until Round 2.  He just danced around Patterson, deliberately tiring him out.  He knocked him out in Round 12.  He won six more bouts over the course of the year, and started 1967 fighting Ernie Terrell.  Terrell had not lost a single bout in 5 years.  Muhammad Ali taunted him both physically and verbally throughout the fight.  The bout was later called "one of the ugliest boxing fights" ever by many critics.  Muhammad Ali won, but it was considered one of the cruelest fights in boxing history.  After winning one more bout, he was stripped of his Heavyweight title for refusing to fight in the Vietnam War.  He was sentenced to five years in prison and a $10,000 fine.  He appealed the decision, and from 1967 to 1970, he was unable to fight or travel, while the case moved through the court system.

Ali returned to the ring in 1970 and won his first two fights before suffering his first defeat as a professional.  Fighting Joe Frazier in a match that was called the, "Fight of the Century", Ali stayed on his feet, but got pummeled by Frazier over the course of the bout's 12 rounds eventually losing by unanimous decision.  He fought successfully for the next six years, including beating Joe Frazier in a rematch, and winning the famous, "Rumble in the Jungle" against George Foreman.  However, by 1976, his body was starting to fall apart.  His longtime trainer quit after Ali chose to ignore his repeated suggestion that Ali retire due to the condition of his kidneys.  Ali took some time off to recover from two rough bouts. During this period of rest, he converted to the less militant Sunni Islam.

Though he was not fighting as well as he had in the past, Ali did manage to win his third Heavyweight title in 1978.  He chose to retire, but then came back for another fight during the summer of 1979.  The fight was really only for money, and he did not win.  By the early 80s, symptoms of Parkinson's Disease began to affect his ability to function.  He had begun stuttering and his hands trembled noticeably.  He was ordered to undergo a physical before a fight in Las Vegas, and was pronounced able to fight by staff at the Mayo Clinic.  However, the fight was a mess.  Ali's opponent dominated, and his trainer finally stopped the bout during the eleventh round.  He fought one more time in 1981, and then hung up his gloves for good.

Not content to sit at home in his retirement, Ali refereed, appeared at multiple political and social gatherings, and even met with Saddam Hussein in an attempt to negotiate the release of American hostages.  Since retiring, he has received numerous honors, including being made the first Honorary Freeman of Ennis, in Ennis, County Clare, Ireland, the home of his great-grandfather.  10,000 people attended the ceremony.  He lit the flame at the 1996 Summer Olympics in Atlanta, and carried the Olympic Flag at the 2012 Summer Olympics in London.  His Parkinson's Disease has slowed him down considerably now, but he still makes public appearances when he can.  Though his body is no longer cooperative, if you look into his eyes, it is clear that the tough, ambitious man who polarized fans and electrified the sport of boxing, is still in there.  Though some boxers have gotten close to Muhammad Ali's level of fame, no one has yet eclipsed it.  That's a title there is very little chance of him ever losing.