By Amy Lamare on September 24, 2017 in Articles › Entertainment

They are a staple of every sideline from Pop Warner leagues to high school to college and to the pros. Cheerleaders are a great American tradition and no place are they showcased better than in the National Football League. On the surface, being an NFL cheerleader seems like a great job. Cool uniforms, the adulation of fans, sideline views of the game, getting paid to look beautiful and dance while supporting professional football teams… But can these (mostly) young (mostly) women make an actual living shaking their pom poms on the sidelines of NFL stadiums? Who are these professional cheerleaders and how much do they make? Are higher profile cheerleaders like the Dallas Cowboys squad better compensated than those for teams like Detroit? Trick question, Detroit doesn't have cheerleaders. Let's take a look at the Average Salary of NFL Cheerleaders.

Quick NFL cheerleader facts: The 1954 Baltimore Colts were the first NFL team to showcase cheerleaders on the sidelines. Today, 26 out of 32 NFL teams have a cheerleading squad. The New York Giants do not have cheerleaders because team owners do not want to support the image of scantily clad women on their sidelines. When the Packers played the Steelers at the Super Bowl in 2011, it was the first time neither team had a cheerleading squad. As of this writing, The Baltimore Ravens are the only team with a male cheerleader.

If that's not embarrassing enough, keep in mind that NFL Mascots earn between $23,000 and $65,000 per year. Mascots also get benefits and bonuses and they don't have to prance about practically naked. To put it into even more perspective, let's take a look at a player on an NFL team's practice squad. These men never make a play during an actual game and they make about $100,000 per season. Over a season (16 games) that works out to $6,250 per game.

Cheerleaders clearly cannot subsist on cheerleading alone, The average per game salary for a cheerleader is $70-$150. Many of the cheerleaders are required to purchase their own uniform, at a rough cost of $650. Like I said, they'd make more money at Applebee's. Cheerleaders also put in an enormous amount of time practicing – sometimes up to six hours per practice, several nights a week. Factor in full time jobs and you're looking at a very long day. Oh, and cheerleaders are not compensated for practice time, further driving their hourly rate down. And don't forget, game days can be 12-hours long as well, for a mere $70-150 paycheck. 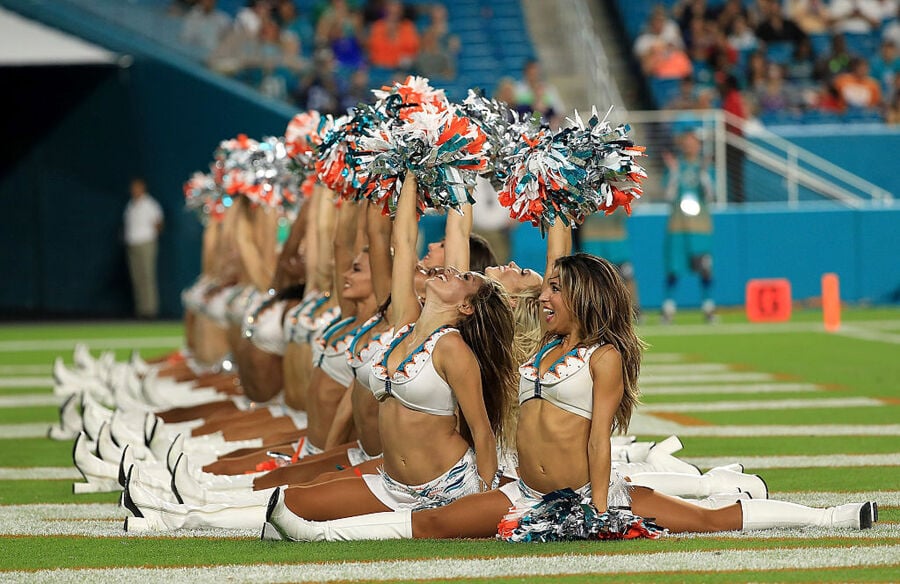 With such a low salary, you may be wondering why anyone wants to be an NFL Cheerleader. Well, consider the fact that most of these young women have a dance and/or cheer stunt backgrounds and they may simply enjoy doing it. For many it's about performing, not about money. However, being an NFL cheerleader can lead to good networking opportunities and a much better paying job in the future. If a former Dallas Cowboys Cheerleader goes in to interview for a position in Texas, don't you think her history as one of America's Sweethearts holds some sway with hiring managers? It's good PR for a company to have a former cheerleader on staff.

Still, with the cheerleading industry growing, it seems like change is inevitable. After all, these are highly trained women (and some men – the Baltimore Ravens are the only squad with male cheerleaders) at the beginning of their professional lives. The average age of an NFL cheerleader is just 25 years old. Lobby groups are even trying to get cheerleading acknowledged as an Olympic sport.

The Cowboys' cheerleading squad brings in an estimated $1 million per year to the team through merchandising (swimsuit calendars) and pricey cheerleading camps for aspiring Dallas Cowboys Cheerleaders. It seems like the cheerleaders in general are not seeing the benefits they bring to NFL teams reflected in their paychecks. Despite the hard work, extensive training, and long hours NFL Cheerleaders put in, their jobs are considered to be and compensated as if it is a hobby, instead of an actual career. What do you think? Should NFL cheerleaders earn more money? Or are they pretty well compensated as is to stand around and cheer?