How Much Money Is On Planet Earth?

By Brian Warner on November 21, 2016 in Articles › Entertainment

Here's a simple question that I can't believe we haven't explored yet on Celebrity Net Worth: How much money is actually on planet earth? If you somehow were able to add up all the money stored away in all of the world's couches, mattresses, savings accounts, checking accounts, money market accounts, stripper thongs, cookie jars, parking meters etc… how much money are we talking about? It turns out this question has a couple interesting and equally valid answers…

For simplicity's sake let's go ahead and assume that all the money in the world has been converted to its US dollar equivalent. So, basically we are asking how much money in USD is in the world?

The most obvious question we want to answer right off the bat is how much physical currency exists in the world. As you might guess, physical currency means coins and paper money in all the various world currencies (but remember we are just gonna assume everything has already been converted to USD). Economists would refer to this as the "M0" money supply (that's a zero not an "o"). In more formal economics terms, M0 is equal to the aggregate sum value of all the physical coins and bank notes around the globe. Most recent estimates of the current value of M0 range from roughly $5-6 trillion dollars.

Out of that $5-6 trillion, the Federal Reserve Bank of New York estimates that roughly $1.2 trillion is made up of US currency. Assuming the population of the US is 319 million, if you took that $1.2 trillion and divided it up, every American would be entitled to around $3700. FYI, the current national debt is $17.9 trillion, which when divided up equates to $56,000 worth of debt per US citizen. And if that's not scary enough, the national debt increases by roughly $2.4 billion EVERY DAY. 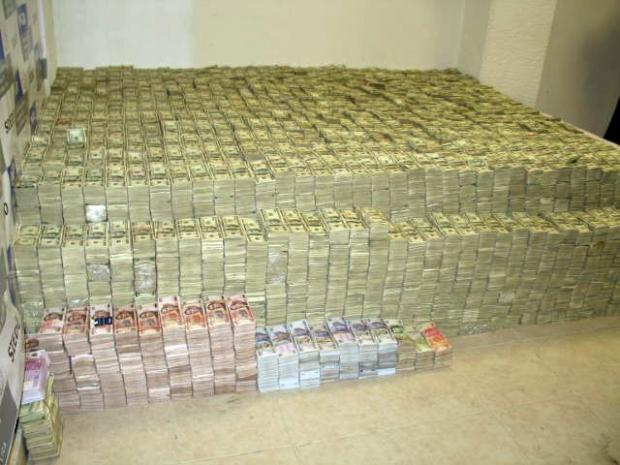 Here's where this question gets really interesting, and a tiny bit complicated. It turns out that M0 represents only around 10% of all the money that is available to spend in the world at any given moment. How is that possible? Well, when it comes to money there's actually a lot more than just coins and dollar bills floating around the world. For example, let's say you deposit $5000 worth of physical USD bills and coins into your checking account today. Tomorrow, when you go online to check the account balance, you will see $5000. But that does not mean there is $5000 physically sitting in your special account that goes untouched until you decide to buy something. Your $5000 deposit immediately goes into the bank's overall pool of reserves. These reserves are then loaned out in small fractions to other people who need business loans, mortgages, payrolls and all the other transactions that banks make possible. This exchange can happen because banks are only legally required to keep a fraction of their reserves physically on hand at any given time.

Now, let's say someone walks into your bank today and takes out a small business loan of $4000. This person now has $4000 to spend on whatever his or her business needs. But that doesn't mean you can only spend $1000 worth of what's in your checking account now. Thanks to the bank's implicit guarantee, you could go out and spend every dollar of that $5000 betting on black in Las Vegas. So technically the bank has created $9000 worth of spending power based on just $5000 worth of physical money. In an instant, $4000 worth of new money (spending power) is magically born. When you add up M0 plus all the value that is subsequently created, economists refer to as "M1". The most recent estimate of the worldwide value of M1 is $25 trillion.

"M2" is very much like M1, except it includes less liquid assets like CDs and money market accounts. The current estimated worldwide value of M2 is $60 trillion.

So now that you know exactly how much money is on planet earth in its various different forms, go out and get your share! There is literally $75 trillion dollars out there up for grabs. Go find your $1 billion or someone else will!

If you want to learn a little bit more about these concepts, or if my explanation above wasn't thorough enough, check out this awesome video from Vsauce on youtube: