How Much It Costs to Mount a Successful Broadway Musical… Or a Massive Flop.

By Paula Wilson on April 30, 2014 in Articles › Entertainment

Like movies, Broadway shows can be extremely hit or miss.  Audiences may be totally jazzed about dancing, singing cows (see multi-award winner "Will Roger's Follies"), but hate dancing, singing frogs (see "Wind in the Willows" – which closed after four performances).  Audiences may flock to the film version of a show and then pay top dollar to see it come to life onstage (see "The Lion King").  Or they may flock to the film version and then completely ignore its Broadway counterpart (see notorious flops such as "Carrie: The Musical" and "Breakfast at Tiffany's").  It's difficult to know exactly which way the wind will blow when it comes to Broadway.  However, one thing is certain, the shows that make money – and more importantly, the shows that don't – are always a huge surprise.  Here are the stories of two shows that made Broadway bank to the tune of millions in ticket sales, and two shows that died ugly, ugly multi-million dollar deaths.

Let's start with the good stuff…

"The Book of Mormon"

"The Book of Mormon" is the brainchild of "South Park" creators Trey Parker and Matt Stone, and "Avenue Q" creators Robert Lopez and Jeff Marx.  Jeff Marx dropped out of the process fairly early on, and the trio of Parker, Stone, and Lopez, went on to bring the project to Broadway.  The project began in a surprisingly mundane way.  Parker and Stone were invited to see "Avenue Q" on Broadway.  The show's creators, Lopez and Marx, saw that they were in the audience and invited them out for drinks.  Both duos had been tossing around the idea of projects about Joseph Smith and Mormons, so in a fit of creative frenzy on that summer night in a New York bar in 2003, "The Book of Mormon" was born.  Over the course of the next seven years, Parker, Stone, and Lopez would get together to work on it whenever their schedules allowed, often traveling between New York, Los Angeles, and London, in order to find the time to continue developing the musical.  They began workshopping the production in 2006.  Parker and Stone were not entirely convinced that their idea was going to work, but Lopez was more confident.  They secured a co-director and choreographer, Casey Nicholaw, in 2010, and then snagged successful film/theater producer, Scott Rudin, to produce the show.

It was originally slated to open Off-Broadway, but Rudin noticed that the trio worked better under pressure.  He changed his mind and informed them that it was going to open on Broadway.  Everyone was sweating bullets.  Would audiences run from a satirical show about Mormons?  Were they courting disaster?  Was it destined to close as soon as it opened?  The answer to all those questions proved to be a resounding, "No".  In fact, "The Book of Mormon", which had its official opening on March 24, 2011, after a month of previews, has become one of the most successful musicals of all time.  Production costs came in $2 million under  budget, which is almost unheard of on big budget projects of any type.  When it became clear that tickets to the show were becoming hot items, the producers began raising and lowering the pricing in the same way that airlines and hotels do.  Peak performance times cost more.  The end result was that audience members were paying as much as $470 for orchestra seats to some shows.  Tickets were in such high demand that someone began selling counterfeit ones on Craigslist a month after the show opened.

The producing team had invested $11.4 million in a production that had everyone biting their nails.  They were paid back in spades within nine months.  The show has since enjoyed two National tours and extended runs at dedicated venues in Chicago and the West End.  It's earned 9 Tony Awards, including Best Musical.  The Original Broadway cast album won a Grammy, and reached #3 on the Billboard charts, the highest of any Broadway album in 40 years.  The show currently brings in $19 million per month.  It's grossed $200 million in just three years, and it shows no signs of slowing down.  Scott Rudin has the rights to the film.  It's probably only a matter of time… 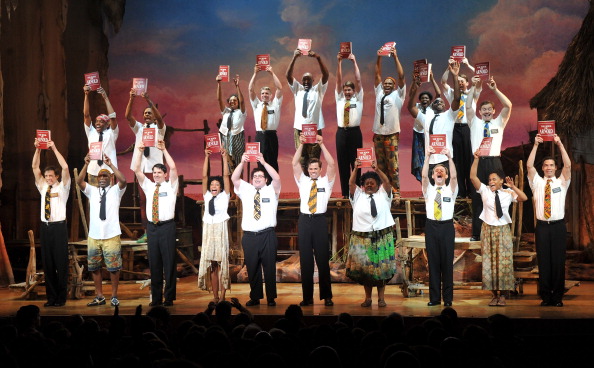 Nearly 17 years ago, "The Lion King", opened on Broadway.  It was Disney's second Broadway musical after the success of "Beauty and the Beast".  However, everyone was nervous.  In a departure from their previous Broadway offering, "The Lion King" had a style all its own.  It used the plot and music of the massively successful 1994 cartoon (which has grossed $987 million worldwide) as a springboard, but the musical was far more rooted in the images and sounds of the story's East African setting.  Overseen by famed director/puppeteer/designer Julie Taymor, the musical was unlike anything that had ever been attempted on Broadway.  It proved to be an instant, endearing, MASSIVE hit.

Fast-forward to today, and the show has won six Tony Awards, including "Best Musical".  It has enjoyed two National tours in the US, a UK National tour, a Japanese National tour, and Disney-produced productions have opened in Tokyo, London, Toronto, Los Angeles, Hamburg, Sydney, The Hague, Shanghai, Seoul, Johannesburg, Paris, Taipei, Las Vegas, Singapore, Madrid, and Sao Paulo.  The Disney corporation is known for its ability to make consumers spend money without even realizing their spending money, and they approach tickets for "The Lion King" the same way.  While "The Book of Mormon" uses the airline ticket technique  for raising ticket prices, it was "The Lion King" that invented it.  The musical employs an entire team of analysts whose sole job it is to monitor and set ticket prices for all the various productions around the world. "The Lion King" is the first Broadway musical to pass the billion dollar mark, but no one is surprised.  If any show could do it, it's  a hit show produced by the business geniuses at Disney.

The Not So Good…

Based on the hit 1992 movie, "Leap of Faith" starring Steve Martin, the premise for "Leap of Faith" seemed like a surefire hit.  It was, in essence, a show about show business.  While the main character was a con artist, watching him as he performed his cons, and eventually found redemption, seemed like the perfect story to bring to the stage.  Development began in 2008.  Celebrated actor/dancer/singer, Raul Esparza, signed on to play the role originated by Steve Martin.  Multi-award winning composer Alan Menken ("The Little Mermaid", "Beauty and the Beast", "Aladdin", "Enchanted", "Tangled), signed on to write the score.  Over the course of the next few years, the production would change directors a few times, until it settled with Tony-winning choreographer, Rob Ashford.  Everything was in place for the launch of a successful musical.

"Leap of Faith" opened in Los Angeles, co-starring Brooke Shields, on September 11, 2010.  It ran for six weeks and received lukewarm reviews.  The production team went back into the rehearsal hall to retool it.  After some reworking, it began previews on Broadway on April 3, 2012, opened officially on April 26, and closed on May 13, after just 24 previews shows and twenty performances.  The reviews for the Broadway production were anything but lukewarm.  They were, in fact, completely cold.  One of the more famous reviews came from Ben Brantley of The New York Times, "Leap of Faith' is this season's black hole of musical comedy, sucking the energy out of anyone who gets near it…"  Ouch.  Ticket sales were almost non-existent and barely covered the salaries of the cast and crew.  After five years of development, the production closed in less than five weeks.

"Spider-Man: Turn Off the Dark"

"Spider-Man: Turn Off the Dark" holds the dubious honor of being the most expensive musical ever mounted with one of the dumbest names ever conceived.  Helmed by Julie Taymor, who scored a huge hit with "The Lion King", the musical was supposed to revolutionize Broadway all over again.  It didn't.  Instead, the incredible stunt work and physical demands of the show sent multiple cast and crew members to the hospital.  One of the accidents during performance was famously caught on tape.  The lead actor playing Spider-Man (it took 9 different actors, acrobats, and stunt people to bring the character to life each performance), was prematurely released from one of his flying harnesses while whizzing around above stage.  He plunged into the orchestra pit mid-song, breaking multiple bones and puncturing a lung.  By the time show actually opened, after an unprecedented seven months of previews and retooling, the cast had gone through multiple major changes – largely because the original cast members were all too injured to continue performing the show.

However, the problems began long before that.  Throughout its development process, sweeping rewrites and changes caused delays.  The retooling continued throughout the seven months of previews.  Many of the changes were an attempt to fix areas where the technical elements of the show were simply too complicated to perform consistently each night.  Julie Taymor withdrew from the production in March 2011, just three months before the show finally opened.  Initially, ticket sales were high.  At one point, the show set a week ticket sales record of $2.9 million.  However, for all its super cool stunts, the show wasn't actually very good.  Ticket sales began to decline rapidly.  Due to the number of injuries the actors sustained doing the show eight times a week, the production was no longer able to get injury insurance, either.  In November of 2013, the producers threw up their hands and called it a day.  "Spider-Man:  Turn Off the Dark" closed January 4, 2014, $60 million in the hole.

These are not the only shows to have succeeded and flopped, of course.  "The Phantom of the Opera" is the longest running show on Broadway and profits currently hover around $890 million worldwide.  On the other end of the spectrum, "Taboo" a musical by Boy George, and personally funded by Rosie O'Donnell, lost $10 million and closed after only a few months.  The list of projects that became surprise hits or surprise failures goes on and on.  The difficulty that Broadway faces, is that musicals take years to develop and produce.  What audiences love in 2008, may no longer apply, when the show finally opens 5-10 years later.  No one seems to have figured out the key to certain success, but at the end of the day, that's part of what makes being in a hit show so awesome.