The Money It Takes to Assemble "The Expendables"

By Paula Wilson on July 22, 2014 in Articles › Entertainment

When "The Expendables" came out during the late summer of 2010 people were divided about whether it would live up to the hype or not.  Sylvester Stallone wrote, directed, and starred in the movie.  He was in the midst of a comeback of sorts, after his "Rocky" and "Rambo" sequels in 2006 and 2008, respectively, and he'd surrounded himself with a grab-bag of fellow action stars.  From his 80s film action competition (Dolph Lundgren, Bruce Willis, and Arnold Schwarzenegger), to 80s stars whose careers had gone sideways (Mickey Rourke and Eric Roberts), to overseas action stars that had stormed the American market (Jet Li and Jason Statham), to up and comers (Terry Crews and Steve Austin), "The Expendables" seemed on track to be a slam-dunk.  It took in over $100 million at the box office domestically, on an $80 million budget.  It's overseas take made it even more profitable.  It was the beginning of a very lucrative franchise.  However, it was also the beginning of a revolving door of action stars.  Some have signed on the for long haul, but others have come and gone, or are just now signing on. The reason for the ever-shifting cast?  Well… it basically comes down to a combination of big personalities and money.  As Hollywood gears up for the release of "The Expendables 3", here's a look at what it takes to assemble the ultimate action team by the numbers.

Who Has Left the Franchise: 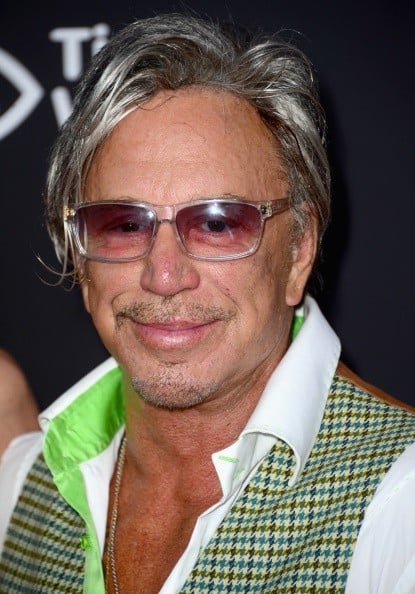 Mickey Rourke has had a straight-up strange career.  He went from being a Hollywood golden-boy to completely unhire-able, with a stop in the boxing ring along the way.  When he began his phoenix-like rise from the ashes with his role in "Sin City", he was almost unrecognizable.  Sylvester Stallone has a reputation for having a long memory and loyal streak, so he reached out to his fellow 80s movie alum and offered him a gig.  Due to his reputation, Mr. Rourke was not commanding the big bucks back in 2010.  In fact, he was making $400,000 a picture or less, which is a piddly amount for an Oscar nominee.  Casting him wasn't going to break the bank.  2010 proved to be  a breakout year for him, however, and when "The Expendables 2" rolled around, he turned it down to work with critically-acclaimed director, Martin McDonagh, on his film, "Seven Psychopaths".  He subsequently dropped out of the film after disagreements with the director.

Bruce Willis agreed to do his old friend, former restaurant partner, and box office competition a solid, when he signed on for a cameo in the first "Expendables" film.  The cameo, which involved a conversation between Willis, Arnold Schwarzenegger, and Stallone, just about made action aficionados' heads explode.  His role was expanded for the "Expendables 2", capitalizing on Willis' resurgence at the box office after "RED" and the critically-acclaimed "Moonrise Kingdom".  When "The Expendables 3" rolled around, he asked for more money.  A LOT more money in fact.  Stallone wanted to book him for four days and Willis wanted $4 million for it.  That went over like a lead balloon, and the pair commenced to throw down in the way of all Hollywood celebrities these days.  They had a short Twitter war.  The end result?  Willis was canned, and Stallone replaced him with another aging star almost immediately – apparently for less money.

Like Mickey Rourke, Jean-Claude Van Damme went from major star to total washout over the course of ten years.  Personal demons and undiagnosed bipolar disorder made him nearly impossible to work with, and there was a period of time when gigs proved very elusive.  However, his darkly comic turn in "JCVD" in 2008 and the reboot of the "Universal Soldier" franchise the following year, gave him a boost. When "The Expendables 2" began casting, he signed on to play the bad guy, a role that was a bit of a departure from all of his hero tough guy roles of the 80s.  His dollar amount per picture has fluctuated over the years, but he probably made somewhere in the ballpark of the number listed above.

Chuck Norris began his action career in the 70s, and has worked steadily ever since. Now in his 70s himself, he still manages to be more quietly "bad-ass" than many current action stars.  He reportedly signed on to work on "The Expendables 2", because he wanted to hang out with current action stars like Jason Statham and Terry Crews.  He'd never met them and he was curious.  Action fans everywhere did a happy dance when Norris' casting was announced, but their joy was short-lived.  He announced that he would not be returning to the franchise almost as soon as the second film wrapped.  His reasons had less to do with money, and more to do with the expletive-laden script.  Turns out Mr. Norris doesn't appreciate swearing in his movie projects and when the producers didn't come through with their agreement to release a sanitized version of "The Expendables 2", Norris bowed out of future installments.

With so many departures after "The Expendables 2", Sylvester Stallone started making phone calls.  Here's a quick rundown of some of the more important members of the new cast and their approximate paychecks.

Harrison Ford doesn't really need an introduction does he?  He's Han Solo and Indiana Jones for pity's sake.  However, the last decade or so has been full of ups and downs for everyone's favorite intergalactic/explorer hero, and he seems to have decided that the best thing to do is just to sign on for as many sequels as he can stand.  Beginning with 2013's "Anchorman 2: The Legend Continues", he's slated to appear in four other sequels over the course of the next two years.  His salary is approximate, but we do know without a shadow of a doubt that he is being paid less than a million per day. He was the actor hired to replace Bruce Willis and Sylvester Stallone full on tweeted that he'd found someone great for cheaper – so – of course it's true.

Like many other men on this list, there was a time when Wesley Snipes could do no wrong in Hollywood.  He seemed able to go from hard action, like the "Blade" trilogy, to romantic drama like "Disappearing Acts", to comedy like "To Wong Foo Thanks for Everything, Julie Newmar", without missing a beat.  Basically, he was Will Smith before Will Smith had become the entertainment juggernaut that is Will Smith.  Unfortunately, Wesley Snipes was not so good at managing his money, and he was jailed for three years for failure to file his taxes.  He was released in 2013, and this is first major film role since then.  Now in his early 50s, the former action star and 5th dan black belt in Karate needs a career boost.  It only makes sense to sign on for a project with Sylvester Stallone, since comebacks seem to be what Mr. Stallone is so good at.

Antonio Banderas was already a major star in Spain when he decided to try for a career in Hollywood.  In the early 90s, he truly broke through, appearing in "Philadelphia", "Interview with the Vampire", and "Desperado", back to back to back.  By the time he starred in "The Mask of Zorro" in 1998, he'd become a household name in the US.  The early 2000s saw him earning paychecks in the $10 million to $15 million range.  Then it began to seem as if the lights had gone out on his career.  He released flop after flop, and slowly began to disappear from the public eye.  While he has had a few moderately successful projects, he hasn't had a hit in many years.  Of late, he's returned to making movies in Spain, so "The Expendables 3" represents a chance to re-emerge in the American market.

Remember when Mel Gibson was an Oscar-winning, golden-boy, maverick director and actor, who turned in award-winning performance after award-winning performance no matter the genre?  Yeah, a lot of people remember that Mel Gibson.  However, that Mel Gibson seems to have gone into retirement a while ago, and next to no one has been interested in interacting with the new Mel Gibson.  From his controversial and inflammatory comments, to his sudden propensity for violence, Mel Gibson went from everyone's favorite leading man in Hollywood to the man everyone crossed the street to get away from.  Sylvester Stallone is basically throwing him a life-jacket with a role in "The Expendables 3".  Whether it will have any affect on his career remains to be seen.

With so many action stars signing on to work on "The Expendables" franchise, you'd figure Steven Seagal would be jumping at the chance to work with his action buddies.  Such is not the case, however.  In fact, Seagal has made it clear that he probably won't ever join the cast, saying, "I just didn't like some of the people involved.  Life is too short to work with funny people."  Ouch.  Them's fightin' words.  Long story short, no amount of money will entice him to work with Sylvester Stallone and crew, so we all might as well stop hoping and wishing.