Aerosmith Has Made The Majority Of Its Money From Something Totally Unexpected. More Than Music Sales, Merchandise, Touring…

By Paula Wilson on May 9, 2018 in Articles › Entertainment

Sometimes it seems like Aerosmith has been around since God was a child.  It's tough to go anywhere in the world without hearing an Aerosmith song played on the radio at least once a day, if not once an hour.  Even when the band was struggling with inter-personal issues, they were still selling out stadiums and blazing up the charts. With all that success, you'd think their album sales would have made them wealthy, wealthy men.  And yes, they have sold over 150 million albums worldwide. And yes, each band member now sports a net worth in the $100 million+ range. But here's the strange reality: The majority of Aerosmith's money did not come from their multi-platinum records. Believe it or not, the band has made the the majority of its money without actually having to play a single instrument or sell a single album. Turns out, their real fortunes have actually come in the form of royalties and licensing fees off a little video game called: "Guitar Hero: Aerosmith".

Aerosmith formed in 1970 in Boston.  The original lineup included lead singer, Steven Tyler, guitarist Joe Perry, bassist Tom Hamilton, guitarist Ray Tabano, and drummer Joey Kramer. A year later, Tabano left and Brad Whitford joined the group, and the first great iteration of Aerosmith was born. By 1972, they'd developed a strong fan base in the Boston area, and Columbia Records came calling.  They released their first album, "Aerosmith" in 1973.  The release of their third album, "Toys in the Attic", in 1975, shot them into the stratosphere. The group would dominate the airwaves for the next five years, churning out hit song after hit song, and headlining hugely popular tours. Their fan base was so large and passionate that they were collectively nicknamed the "Blue Army".

Like most mega-rock bands, the group eventually fell apart due to drug use and in-fighting. Both Joe Perry and Brad Whitford left the group, and two replacement guitarists were brought in between 1980 and 1984.  The one album released during this time was only moderately successful.  The return of Perry and Whitford in 1984 led to the release of a solid album in 1985, but fan interest had waned.  Then in 1986, Perry and Tyler teamed up with Run-D.M.C. to record the smash hit single, "Walk this Way", and suddenly they were back on top. After each member of the band made their way through rehab, the group hit their groove again. They have continued to tour and release successful albums since then.  To date, they have amassed 25 gold albums, 18 platinum albums, 12 multi-platinum albums, and 21 Top 40 singles on the Billboard Hot 100.  They've also snagged four Grammys, six American Music Awards, and ten MTV Video Music Awards. 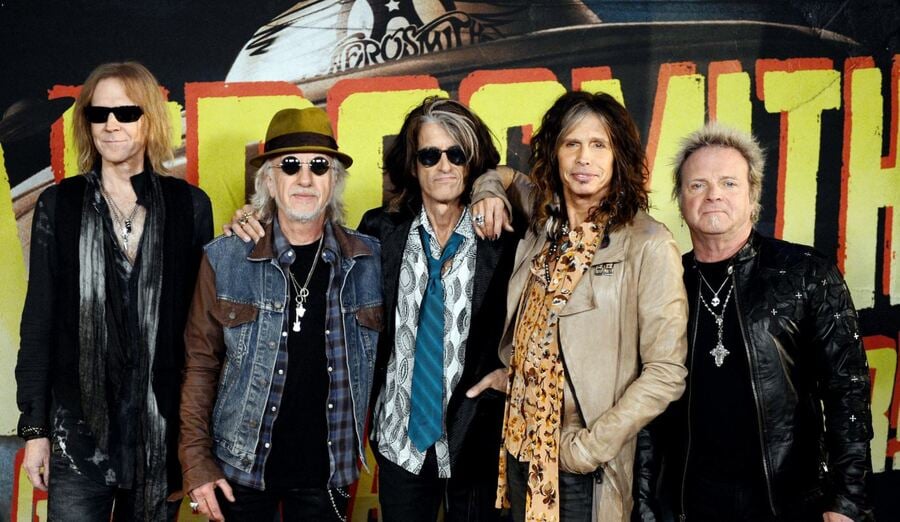 On top of being one of the most successful, and long-running rock groups ever, they are also one of the most business savvy.  In 2007, when the band was preparing to start recording a new album, they licensed 29 of their classic hits to Activision, the publishing company in charge of "Guitar Hero". A new version of "Guitar Hero" was developed around the band.  The game, "Guitar Hero: Aerosmith", was released on June 29, 2008.  While reviews were initially a little tepid due to the fact that you had to really like Aerosmith in order to want to play the game, the band ended up coming out on top.  Their undeniably catchy power ballads, and dirty rock with a heavy blues influence, was a hit with the faux-guitar playing set.  The game sold almost 600,000 copies its first week, raking in over $25 million in sales.  Three months later, those numbers had increased to 1 million copies purchased and over $50 million in sales.  AS of this writing, more than 4 million copies of the game had found their way into homes around the world. And along the way, Aerosmith's royalties added up fast. The game has been so successful that the CEO of Activision actually came out and claimed that their game royalties vastly outweigh their lifetime income from any other source. That includes albums sales, merchandising and touring. According to Activision CEO, Bobby Kotick:

"Their version of Guitar Hero generated far more in revenues than any Aerosmith album ever has…. Merchandising, concert sales, even their ability to sign a new contract have all been unbelievably influenced by their participation in Guitar Hero."

As if all that wasn't awesome enough, the game has also introduced the group to a whole new generation of fans, and subsequently their album sales have increased by nearly 40%! Truly unbelievable for a band that got its start playing in bars in Boston more than 40 years ago.  Their ascent to the top of the rock world had to survive drug addictions, personal problems, physical injuries and many failed relationships.  Ironically, after all of that, the group has seemingly achieved their most lasting worldwide fame and fortune because of a video game!