By Brian Warner on April 4, 2011 in Articles › Entertainment

Charlie Sheen's "My Violent Torpedo of Truth/Defeat is Not an Option Show" tour landed in Chicago, and Charlie was greeted by a crowd of well wishers with cameras. The show was slightly better than his unprepared one in Detroit, which had members of his audience walking-out with angry shouts of "Loser!" and "You suck!" Next stop Cleveland, OH.

Chuck Liddell's custody fight with his baby mama Lori Geyer will be heard in Colorado. Geyer has accused Liddell of drug and alcohol use as the reason for him not being awarded custody of the couple's son, "Cade". Geyer goes on to state that another reason for Liddell being an unfit father is a viral video ad for Reebok where Chuck and his current wife are working out in the nude!

Queen Elizabeth II drawers will have to wait for a new owner. Apparently she lost her panties in 1968 onboard the late "Baron" Joseph de Bicske Dobronyi's plane; the undergarment will not hit the auction block until after the wedding of Prince William and Kate Middleton. Boy! These used pair of panties will look wonderful hanging from someone's display case!

Captain Phil Harris' replacement on board the F/V Cornelia Marie for the "Deadliest Catch" series is not a very sensitive guy. During a spat with the shows engineer Steve Ward, and with two of the late captains sons near by, Derrick Ray makes such rude comments as "Phil's not here, he's f**king dead, okay?" Guess he is just not a people person.

Denise Richards was in the Bahamas on the beach with her and Charlie Sheen's two daughters, in her mommy role. While daddy is flying around the world making new friends….or should I say enemies (judging by his live show's reviews). 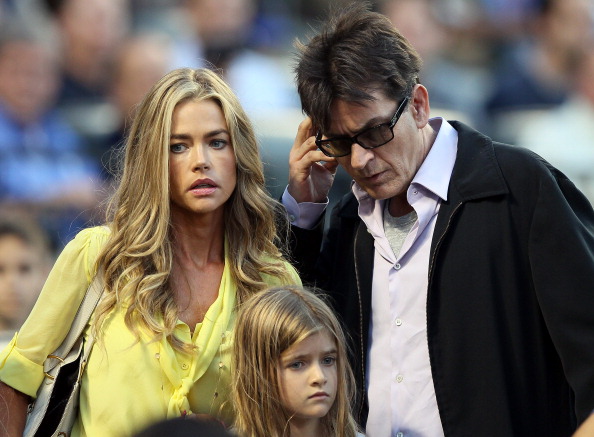 Michael Jackson will live on outside the Fulham FC soccer stadium in London, where owner Mohamed Al Fayed a close friend of the late pop star has built a statute in his honor. Al Fayed has originally intended to put the statue of Jackson outside of Harrods in London, but he sold the store last year.

Lindsay Lohan has been offered a role in Tyler Shields upcoming movie "Eyes of a Dreamer" Lohan would play the part of the late actress and murder victim Sharon Tate. Celeb photographer Tyler Shields who is also directing the film will be playing the role of Charles Manson. No answer yet from Lindsay if she will accept the acting gig, or not.

Prince William has been offered a beautiful Rolls Royce for his upcoming Royal Wedding to Kate Middleton. The luxury car which the William's mother late Princess Diana rode in less than a year before her death, is been offered by the Volo Auto Museum in Chicago, no word yet if the Prince will accept.

Katie Couric the anchor of the CBS Evening News is leaving the show. Couric feels that her position on the network news show is too confining and is thus planning to start a syndicated show in September 2012. Sources for the show say that it is not yet official Couric is leaving, but they expect her announcement in the next few weeks.

Michael Buble lost more than just his bachelorhood last week while at a resort outside Buenos Aires. After tying the knot with Luisana, burglars ransacked his home in Argentina. No word yet on what was taken, however Buble replied, "I will not let this ruin the happiest day of my life."