By Amy Lamare on September 28, 2019 in Articles › Entertainment

Leave it to Mitch McConnell to get richer in the middle of the global financial crisis, but that's exactly what he did. His 2009 financial disclosure showed an enormous jump upward while his colleagues in the senate were losing money like most Americans at the time. McConnell had the good fortune to receive a multimillion dollar gift from his father-in-law, James Chao, to him and his wife Elaine Chao. McConnell's 2009 disclosure jumped from a range of $3.1 million to $12.7 million in 2007 to $7.3 million to $33.1 million in 2008. The gift he and his wife received from his father-in-law was listed as between $5 million and $25 million. It was in memory of Elaine's mother Ruth who passed away in 2007 at age 77.

Ruth Chao was the matriarch of a family of eight. Forty years earlier, she and her three oldest daughters made the journey from Taiwan to the U.S. by ship. They were joining her husband John in New York City. By the time Ruth died, she had nearly $59 million in assets in her name. Her will laid out the terms for the maximum amount of money that could be given free of the estate tax be split evenly between her six daughters. In 2007 that was $2 million. The rest was left to her husband James, who is 91 today. James decided to pass even more along to his daughters. It is estimated that Elaine received about $9 million from her dad. 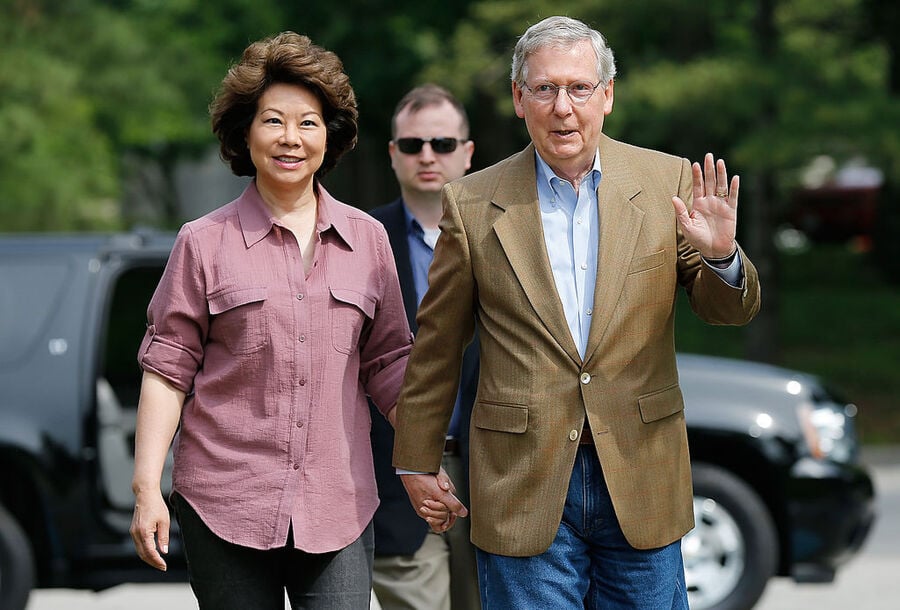 Since that time, the personal fortune of McConnell and Chao has grown thanks to their six figure government salaries – she's Donald Trump's Secretary of Transportation – as well as Elaine's career in the private sector – to $30 million. But where did all that Chao money come from? Back in 1964, James Chao founded a shipping company called Foremost Maritime Group. Today, it is an international giant worth hundreds of millions of dollars. With her father in his 90s, part of the enormous family fortune of the Chao's will be passed to her in the next handful of years.

The shipping database VesselsValue places the value of Foremost's 33-ship fleet at $1.2 billion, not including debt. Value is calculated using the price of each ship, its size and age and present market conditions. It would be reasonable to think that Foremost has a debt ration of 50%, putting the equity in the company at $600 million. In its industry, Foremost is considered to be a respected leader and well-run company. Foremost is a dry bulk shipper and as such, transports dry goods like agricultural products, coal, and iron. Since 2012, Foremost's fleet has grown from 17 ships to 33, including 14 currently being built in shipyards in Japan and China. The gross value of the fleet has gone from $535 million to $1.2 billion over the past seven years. Foremost has the most valuable fleet of any dry bulk shipped in the U.S.

Foremost is family owned and Elaine's youngest sister Angela Chao is the CEO.