Texas Recycling Tycoon May Leave Entire $75 Million Personal Fortune… To His Dogs. Three Sons And Wife Would Get NOTHING.

By Paula Wilson on July 8, 2014 in Articles › Entertainment

Ron Sturgeon is the quintessential self-made man. After his father passed away unexpectedly when he was a teenager, he and his brother suddenly found themselves homeless. Their only worldly possession was a 1965 Volkswagon Beetle. Using the beatup car for inspiration, Ron Sturgeon set out to turn lemons into lemonade. Not the fruit kind of lemon, the defective automobile kind of lemon. Over the next few decades, Ron made A LOT of lemonade. One small business soon grew into a mini empire of multiple businesses. Today Ron Sturgeon is worth an estimated $75 million.  Along the way, Ron's three sons joined the family business.  So, you can imagine everyone's shock when Ron recently announced the possibility that he might be leaving his entire sizable fortune to three individuals who are not his children. They aren't even human. As crazy as this sounds, Ron is potentially planning to leave his $75 million fortune his dogs. If this happens, Willy, Dixie, and Lance, a trio known to the social media world as the "Spoiled Cavaliers", would surely be the richest pets in the world, right? Once you get over the question of what in the heck three dogs are going to do with $75 million dollars, the next question becomes: Why would Ron do this??? Read on…

Ron Sturgeon was born in Texas, and grew up in North Richland Hills.  He was interested in drag racing as a teenager, and first learned to repair cars as part of his plan to have a career on the race track.  However, after his father passed away, he and his twin brother, both seniors in high school at the time, found themselves with no home and no income.  Using the skills he learned repairing his car at the race track, Ron scraped together just enough money to open a makeshift auto service shop specializing in VW Bugs. He was 19.

The business, called AAA Bug Service, quickly took off, and Ron Sturgeon soon began expanding.  He branched out into selling cars and providing auto body work.  He also launched side ventures involving software development, marketing, and IT.  In other words, he worked his butt off.  In 1980, he launched AAA Small Car World – Auto Recyclers Inc, a car recycling business.  This is the business that would transform Ron from mid-level entrepreneur to multi-multi-millionaire. The auto recycler eventually grew into one of the largest car recycling companies in the United States.  It became so successful, in fact, that the Ford Motor Company came calling.  In 1999, Ron Sturgeon sold the company to Ford for somewhere between $10 million and $20 million. 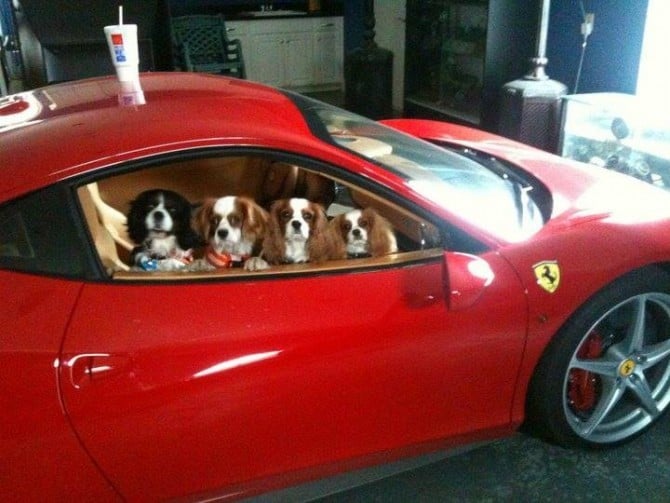 Dogs in a Ferrari

Impressed with his business acumen, Ford hired him to work for them.  It was a short-lived partnership.  He decided to return to working for himself in 2001, launching an auto auction for insurers business, called North Texas Insurance Auction.  In 2002, a year after starting the company, he sold it to Copart, Inc., his largest competitor, for $5 million.  Using a portion of the money he'd made from selling his two businesses, he bought his auto recycling business back from Ford. Ron proceeded to turn the struggling recylcer back around. He soon sold it again, this time to Schnizter Industries, for a whopping $23.5 million.

Today Ron heads up six successful small businesses, including Ron Sturgeon Real Estate, which currently controls nearly $30 million in properties, an Auto Salvage Consultation business, an online consultation company for the automative industry, DFW Elite Auto Rental, DFW Elite Car Club, a luxury automobile time-share company and Mr. Mission Impossible, a small business coaching and public speaking business.  He also collects rare cars and has a massive toy car collection.  So what does any of this have to do with dogs?

His three Cavalier King Charles Spaniels have become almost as famous as the man himself.  The dogs have their own social media manager and PR team. Ron sends videos of his dogs, usually frolicking in human situations, to the social media co-ordinator almost every day.  The videos are often accompanied by notes from the perspective of the dogs, written by Ron.  The dogs have their own Facebook page, a blog, and a Twitter account.  They currently have 23,000 followers.  A huge fan of Cavalier Spaniels, Ron Sturgeon is heavily involved with Spaniel rescue and regularly fosters Spaniels when they are awaiting new homes.  He's so attached to them, that a reality series is currently being developed around his life, his family, and his dogs.  Tentatively titled "Going to the Dogs", the show is a combination of reality show and reality competition.

The good news for Ron's son and wife is that he is still trying to decide what to do with his fortune and business empire upon his death. Unfortunately, for the humans in Ron's life, the dogs seem to be winning at the moment. According to the trailer for "Going to the Dogs", he's still trying to figure it all out, and the challenges presented on the show will help him make his final decision.  He says, "Nobody really knows what I'm gonna do with the money.  They just need to keep sucking up."  Maybe this is all just a ploy to get viewers and bit more fame.  Or maybe he really is seriously considering leaving almost $75 million in assets to his dogs.  Whatever his reasons, even if he does give someone a chunk of his fortune, odds are he'll just turn around, buy it back, and then make more money off of it anyway.