By Amy Lamare on August 29, 2020 in Articles › Entertainment

It's been almost 12 years since author Michael Crichton died. As an author his best-known works include "Congo," "Sphere," "Jurassic Park," and "Rising Sun." He has sold over 200 million copies to date. Several of his novels, notably all of the ones mentioned here so far were adapted into films. Michael Crichton also created the television series "E.R." Surely you've read one of his books, seen one of the movies made from his books, or caught an episode of "E.R." In short, he's pretty much one of the most prolific and famous authors around. Sadly, he passed away in November 2008 at just 66. He's responsible for so many books and movies and television shows and we just want to pay tribute to that and his creative genius with a look back at his impressive life and career. By the way, do you realize that Crichton was 6'9″?

John Michael Crichton was born in Chicago on October 23, 1942. His father John, was a journalist. His mom Zula was a housewife. He grew up on Long Island in Roslyn, New York. He became interested in writing at a very young age (as most writers, this one included, do). When he was 14, an article he wrote about a trip to the Sunset Crater in Flagstaff, Arizona was published in The New York Times. He credited Roslyn's educational system with igniting his love of learning. Although Crichton always wanted to be a writer he enrolled at Harvard as a literature major. He soon believed, however, that the grades he was receiving from a professor were abnormally low. Furthermore, that professor was often very critical of Crichton's writing style. So, Crichton decided to conduct an experiment. He submitted an essay that had been written by "1984" author George Orwell to his professor but put his own name on it. He got a B-! 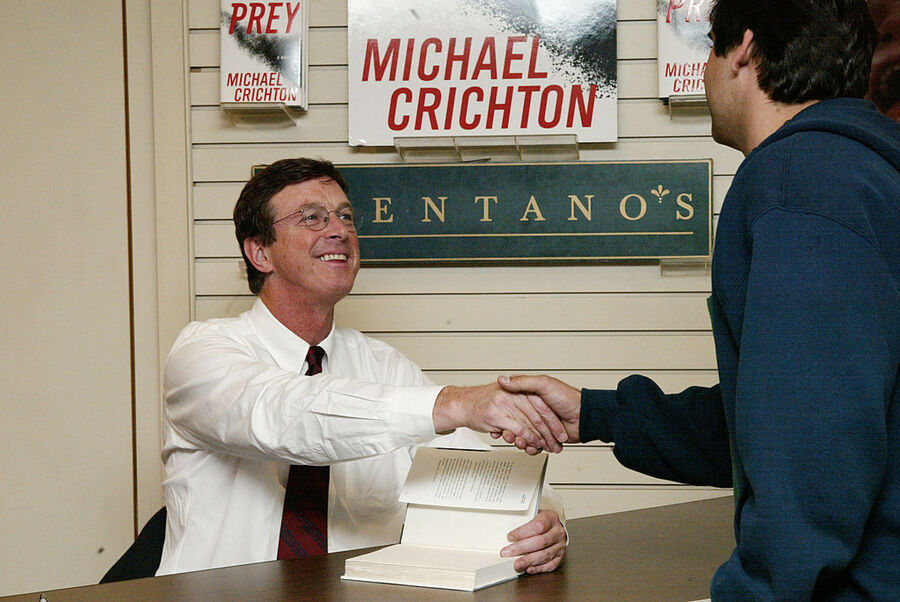 Many years later, Crichton said: "Now Orwell was a wonderful writer, and if a B-minus was all he could get, I thought I'd better drop English as my major…" Crichton changed his major to biological anthropology and graduated summa cum laude and a member of the Phi Beta Kappa society. He enrolled in Harvard's Medical School a few years later and about two weeks in when he realized he hated it. He also realized everyone hated medical school even practicing physicians who loved their jobs. So he stayed in school and got his M.D. while writing novels on the side.

In 1965, while studying at Harvard Medical School, Crichton wrote his first novel, "Odds On." The novel describes an attempted robbery planned by a computer program at an isolated hotel. The book was the first glimpse into Crichton's favorite themes of technology gone wild and the attempt to deal with the consequences that became common themes in  future blockbuster novels and movies.

New American Library published the novel by John Lange (Crichton's pseudonym) in 1966. He used an assumed name because at that point, he was still planning on becoming a doctor. He didn't want his future patients to think he might use them or their stories for his future books. The novel sold enough copies to lead to a series of books by "John Lange." 1967's "Scratch One," the second novel tells the story of a handsome, privileged, charming lawyer named Roger Carr who only practices law as a means of supporting his playboy lifestyle. While in Nice, France, he's mistaken for an assassin. Crichton wrote the book in 11 days. He later said he didn't like the book. "Easy Go," the third novel by John Lange, was published in 1968. It tells the story of Egyptologist Harold Barnaby who discovers a hidden message while he is translating some hieroglyphics.

Crichton's fourth book, 1968's "A Case of Need," is a medical thriller and for it, he used a new pen name – Jeffrey Hudson. This novel was a turning point for Crichton in that technology was important in the telling of the story. He won an Edgar Award in 1969 for "A Case of Need." In 1972, "A Case of Need" was made into the movie "The Carey Treatment," starring James Coburn.

In 1969, Crichton was doing his clinical rotations at Boston City Hospital and he became fed up with the culture there which seemed to put the interests and reputations of doctors ahead of the patients' rights. He took a post-doctoral fellowship in La Jolla, California at the Salk Institute after graduating from med school at Harvard. He was there from 1969-1970. Crichton never got a license to practice medicine. Instead, he decided to devote his time and energy to his writing career.

Also in 1969, 27-year-old Crichton released "The Andromeda Strain", which if you haven't read it, you should download to your Kindle or iPad ASAP. The book is about a killer virus from outer space. "The Andromeda Strain" was Crichton's first bestseller and the first book published under his real name. It was made into a movie.

Crichton released a number of novels throughout the 1970s and 1980s including "The Great Train Robbery" and "Eaters of the Dead." Now let's jump to his major successes, shall we?

In 1990, Crichton released "Jurassic Park." Four studios got into a bidding war for Crichton's book about the ill-fated dinosaur park. He sold the rights to the book for $1.5 million and was paid an additional $500,000 to consult on the film during production. And that 1993 movie, directed by Steven Spielberg, was a huge success. "Jurassic Park" made more than $1 billion at the box office and it only cost $63 million to make. Of course, in 1995, "The Lost World" came out. And was also made into a successful film.

Backing up a year to 1994, Crichton created the series "E.R." It went on to be one of the most successful television shows in the history of television. As of this writing, "E.R." had made more than $4 billion in syndication revenue alone. It also started or furthered the careers of a number of actors and actresses including George Clooney, Noah Wylie, Julianna Margulies, Maria Bello, and more! "E.R." ran for 15 seasons and 331 episodes through 2009.

Crichton continued writing and publishing books until his death. "Prey" in 2002, and "State of Fear" in 2004 come to mind. In 2006, his last novel to be published while he was alive, "Next" was published. Read it to find out what it is about.

In 2002, a genus of ankylosaurus, a horned dinosaur that is the last of the non-avian dinosaurs was named in Crichtonsaurus in his honor.

Crichton was married five times. Four of those marriages ended in divorce. At the time of his death, his wife Sherri was six months pregnant with their son John Michael. He was born on February 12, 2009.

In early 2008, Crichton was diagnosed with lymphoma and later that developed into throat cancer. Michael died on November 4, 2008, at 66. Crichton kept his private life private and his illness and ultimate cause of death was not released until after he died.

Crichton's will didn't provide for his yet unborn son. When he died, Sherri petitioned the courts in Los Angeles to make their son an heir. Crichton's daughter Taylor opposed this move, but the courts decided in John Michael's favor. His son now gets 1/3 of his late father's estate. John Michael Todd Crichton, born on February 12, 2009. As mentioned, Crichton also has a daughter named Taylor (born in 1989) with his fourth wife, Anne-Marie Martin, who he was married to from 1987 to 2003.

Today, his books continue to be adapted into films, making him the 20th highest grossing writer of all time.