By Paula Wilson on January 15, 2014 in Articles › Entertainment

When "The Real World" first aired in 1992, no one had any idea of the kind of impact it would have on television.  It was the show that ushered in the reality television format.  Over the years, reality television has become the television of choice for many, many viewers.  More importantly, reality shows have made stars out of people who are, for all intents and purposes, just regular folks.  Michael Ballard, of "Full Throttle Saloon" fame, has a more interesting job then some, and his net worth of $5 million sets him apart.  However, at heart, he's just a regular guy doing what he loves.  Here's how a motorcycle enthusiastic, and "average joe" from the south, became a massively successful bar owner, and one of reality television's most popular stars.

Michael Ballard grew up in Trimble, Tennessee, and was always interested in bar life.  As a pre-teen, he used to sneak into the most popular bar in town, and earned the nickname, "Little Al Capone" from the local police force.  He eventually settled down a bit, and began his professional career in the cellular phone business.  He took a trip to Sturgis, South Dakota in the late 90s, and subsequently decided to sell his company, Cellular Plus.  Something about Sturgis called to him, and he used the money from the sale of his business to purchase 30 acres of land in the own.  Over the course of the next year, he built a massive indoor/outdoor bar and recreation facility.  The complex, which he named Full Throttle Saloon, features multiple restaurants, a tattoo parlor, stores, two stages for performances, a wrestling ring, a zip line course, a burn-out pit, 200 cabins, and parking to accommodate everyone.  Full Throttle Saloon is open from March to mid-November.  In August, during the Sturgis Motorcycle Rally, the facility hosts as many as 20,000 people per night, and goes through as many as two tractor trailers worth of beer each evening.  In order to make sure that there are enough supplies to provide food and drink for the bikers who congregate at Full Throttle during the Rally days, all vendors deliver their goods between 3 am and sun up.  The road is too clogged with bikers for the trucks to get by any other time of the day. 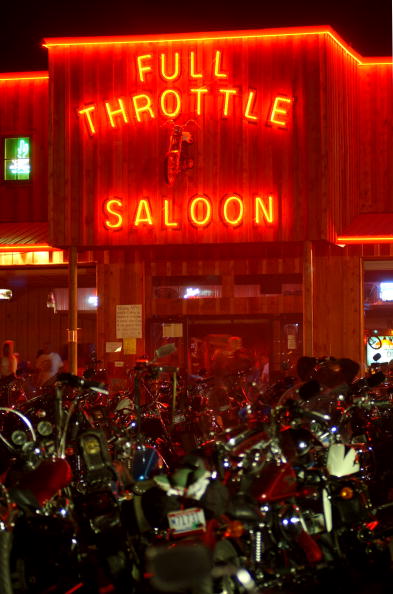 Full Throttle has become the largest biker bar in the world, and is known for attracting a wide range of ages, styles, and personalities.  Anyone is welcome there as long as they are of age, and the bar attracts regular blue-collar workers, as much as it attracts bikers.  Michael Ballard was originally focused on simply keeping the massive bar afloat.  Running a multi-use facility like Full Throttle Saloon is hard work and expensive.  The facility is only viable for 7-9 months a year, so it is vital that he make money during the high season of July and August.

In 2009, he was approached by truTV.  The network expressed an interest in following the daily operations of his biker bar, and they began developing a series around the bar.  The reality show debuted on November 10, 2009.  Since then, "Full Throttle Saloon", the television show, has become almost as popular as the biker bar the series follows.  Audiences have become hooked on the drama involved in coordinating the huge facility, and they have fallen in love with Michael Ballard's wife, Angie Carlson.  Angie is Full Throttle's marketing director, and also runs a dance troupe called the "Flaunt Dancers".  They perform nightly at "Angieland", one of Full Throttle's many bars.  With the success of Full Throttle Saloon, and truTV signing on for a fifth season of the reality series, Michael Ballard is now planning to open a moonshine distillery back home in Trimble called, "Michael Ballard's Full Throttle S'loonshine".  Odds are, that will get its own reality show, too.

He may have started off as an ordinary boy (albeit one with a delinquent streak), but he has grown into one of the most successful bar owners in the world.  For Michael Ballard, success came about because he threw all of his money into one venture, and then worked to make sure it happened.  Full Throttle Saloon is the most popular biker bar in the world for a reason.  It's owner had a clear vision, and he made sure his vision was brought to life on 30 acres of prime South Dakota land.