When The Dotcom Bubble Burst, 98% Of Masayoshi Son's Fortune Evaporated In The Second Largest Loss Of Wealth In Human History

By Brian Warner on August 2, 2020 in Articles › Entertainment

This article was originally published in August 2013 under the title "Meet the Man who Lost the Most Money in Human History." That man, at the time, was SoftBank founder Masayoshi Son. Masa held that distinction for a little over two decades. In May 2022, his wealth loss record was topped by a crypto tycoon named Changpeng Zhao. As we describe in the article below, it took about a year for Masayoshi Son's net worth to drop from $78 billion to $1 billion. Over a 130 period in 2022, $87 billion in personal wealth evaporated from Changpeng Zhao.

Masayoshi Son is the founder and CEO of Japanese telecommunications conglomerate SoftBank. Back in 2000, as the dotcom bubble swelled, Masayoshi Son's net worth peaked at $78 billion. Then the bubble burst. Exploded might actually be a better word. As Softbank's share price plummeted, Masayoshi Son experienced the single largest loss of personal net worth in human history. Here is that story… 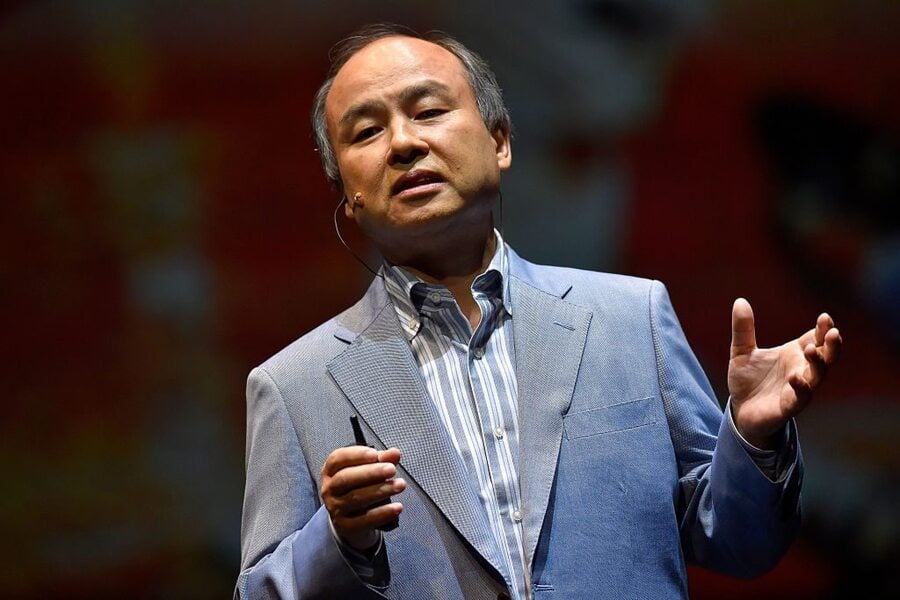 Masayoshi Son moved with his family from Japan to California when he was just 16 years old. He barely spoke English but eventually graduated from UC Berkeley with degrees in both economics and computer science. One of his first businesses was importing cheap knock-off versions of the arcade game Space Invaders then renting them to laundromats. Soon after turning 24, Masayoshi Son founded SoftBank in Tokyo. Within a year, SoftBank was developing various programs for the PC on top of publishing two popular magazines that focused on the personal computer industry.

Always striving for bigger and better, Masayoshi Son spent the next decade transforming SoftBank into a full fledged media and telecommunications empire. By the mid 90s, SoftBank was operating a stock brokerage firm and Japan's #1 satellite television provider. He also convinced Yahoo to allow him to independently launch what would become Japan's largest search engine, Yahoo! Japan.

After taking SoftBank public in 1995, Masayoshi Son became an overnight billionaire. Over the next five years, he used SoftBank's newly acquired war chest to expand his empire at a very rapid pace just as the Dotcom bubble was heating. By 1999, SoftBank was one of the largest internet technology companies in the world. Through SoftBank, Masayoshi Son purchased large stakes in dozens of high flying companies like E*Trade, Alibaba, and Japan's Nippon Credit Bank.

For a time, these investments looked brilliant and SoftBank's market cap grew to an all time high of $180 billion. Thanks largely to his 42% stake in SoftBank's equity, Masayoshi Son's net worth swelled to a whopping $78 billion in February 2000. Two months later, on March 10, 2000, the NASDAQ Composite (the stock exchange that listed nearly all bubble internet companies), peaked at 5,048, more than twice the value from one year earlier.

At this point in history, there were more than 300 publicly traded internet companies on the NASDAQ with a combined value of $1.3 trillion, that essentially did not exist three years prior.

Another year later the market bottomed at 1,200. That's a 76% drop over two very painful years.

A company like SoftBank, with so much exposure to the internet sector, did not fare well in these difficult times. Every single investment Masayoshi Son had championed over the previous five years was decimated. As just one example, Softbank's $400 million investment in E*Trade was reduced to just $22 million. Softbank's market cap dropped a mind-numbing 98% from $180 billion to $2.5 billion.

With that drop in market cap, Masayoshi Son's net worth plummeted from an all time high of $78 billion to an all time low of $1.1 billion. A personal loss of $76.9 billion. Ouch.

Ok he was still a billionaire, and maybe we shouldn't feel too bad for him. But in the words of the great Chris Rock:

"If Bill Gates woke up tomorrow with Oprah's money, he'd jump out a fuckin' window and slit his throat on the way down saying, "I can't even put gas in my plane!" So perhaps we give the guy a tiny bit of sympathy.

And if you do feel bad for Masayoshi Son we have some good news. With time, Softbank slowly started to recover and rebuild. Today, Softbank is still one of the largest internet companies in Japan. As of this writing, Masayoshi Son's net worth is $15 billion.

Masayoshi Son lives in a $50 million three story mansion in Tokyo that features a private, programmable golf-range that can mimic temperature and weather conditions of every top golf course in the world. When Bill Gates visited his house, he was reportedly speechless. In 2012, Masayoshi Son dropped a cool $117 million to purchase a mansion in Woodside, California near Silicon Valley. He also owns a professional Japanese baseball team called the Softbank Hawks. He may not have $78 billion anymore, but it looks like he's surviving.