By Amy Lamare on August 12, 2014 in Articles › Entertainment

Fred Franzia is the CEO and co-founder of one of the biggest wine makers in the United States. He is the man behind Charles Shaw, known affectionately as Two Buck Chuck, the cheap wines sold exclusively at Trader Joe's. Yet, wine makers from Napa to Sonoma consider Franzia's  Bronco Wines a scourge on the wine industry. Whereas Napa winemakers approach wine making as a delicate art, Franzia approaches it like a businessman, and it shows.   Franzia is by far the most controversial person in the U.S. wine industry. He is  also one of the most savvy. By moving in exactly the opposite direction of the industry's elite wine makers, he has built Bronco into the fourth largest wine company in the United States. In fact, Two Buck Chuck is the fastest growing wine in the history of the industry, selling more than 5 million cases, or about 60 million bottles, for $100 million in sales annually. 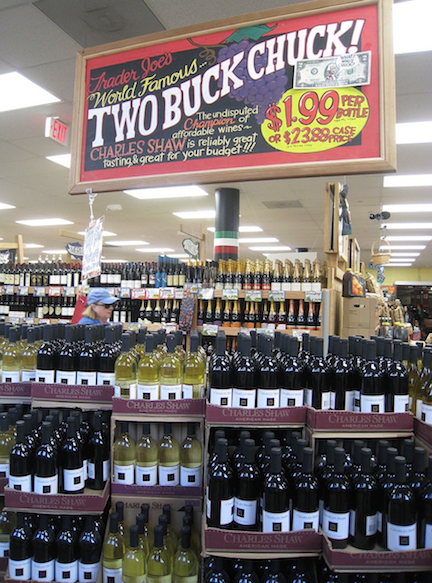 Franzia was born in 1943 to one of the most prominent wine families in California. His grandfather, Giuseppe Franzia, emigrated to the United States from Genoa, Italy, in 1893 and began commercial wine production in the San Joaquin Valley in 1915.  He grew up around the founding fathers of California wine, including his uncle Ernest Gallo, Julio Gallo, Robert and Peter Mondavi, and August Sebastiani. These men are his role models.  Franzia spent summers and holidays pruning vineyards and stacking cases of wine alongside his brother Joseph and cousin John.  Franzia went to work for the family wine business after college. After all, it was only a matter of time before his generation got their chance to run the company. That would not happen however, as in 1973, Franzia's father and uncles sold the family winery to Coca-Cola.

In light of the sale of the family business, Franzia  took what he'd learned and started Bronco Wine Co. on December 27, 1973 with his brother Joseph and cousin John. The brothers had attended Santa Clara University in Northern California, and the Bronco name, besides being the mascot of their alma mater,  is a contraction of Brothers and Cousin, after the three founders the company.

Bronco Wine Co. owns over 50,000 acres of vineyards mostly located in California's Central Valley. Franzia and company have the capacity to produce 61 million gallons  of wine annually. Total annual sales are approximately 20 million cases or 240 million bottles across all of their labels

But Franzia's operation is not your typical genteel Napa Valley vineyard complete with a tasting facility. The vineyard is closed to the public. Franzia is running a business, not a destination. The company's headquarters are a small, termite-ridden building behind a fence topped with barbed wire. The shelves in his office are lined with bottles of his wines, most of which cost less per bottle than a six-pack of beer. A gun safe in the corner sits empty and covered with dust. Franzia can no longer keep weapons as he is a convicted felon.

In 1993, Franzia and Bronco were indicted on federal charges of conspiracy to defraud for misrepresenting cheap grapes worth $100 to $200 per ton as Cabernet Sauvignon and Zinfandel grapes worth five to 10 times as much.  Bronco pleaded no contest and paid a $2.5 million fine. Franzia pleaded guilty, paid a $500,000 fine, and had to step away from the business for five years.

Franzia entered wine making with a business plan, making him an anathema to more traditional wine makers. Franzia is unapologetic about shilling cheaper, lower quality wine. He thinks that the wine industry has become drunk with elitism, high prices, and a bunch of people arguing over what can and cannot be called a "Napa Valley wine". Franzia spent six years battling for the right to label his wines as being from Napa even though the grapes used to make them were not grown in Napa. He lost that battle.

Franzia, for what it's worth, doesn't think the wine industry needs to be so complicated.

"Why complicate it? Does anybody complicate Cheerios by saying the wheat has to be grown on the side of a mountain and the terroir in North Dakota is better than Kansas and all this horse s—? You put something in your mouth and enjoy it. If you spend $100 to buy a bottle of wine, how the hell are you going to enjoy it? It's a joke. There's no wine worth that kind of money."

Sure, Franzia is in the wine game to make money. But he's also bringing wine to a larger audience. There are plenty of consumers who can't or don't want to spend $10, $15, $20 or more per bottle of wine. Through his brands, the largest of which is Charles Shaw, Franzia is bringing appreciation of wine to the masses. He is making it affordable for every dinner table to have a bottle of wine on it. And that angers older, more traditional wineries.

Bronco grows vines, crushes grapes, bottles wine, and runs its own distribution operation. It buys and sells bulk wine. It operates storage and production facilities in five Central Valley and Napa Valley towns. It bottles about 30 of its own labels, including Charles Shaw, Crane Lake, Forest Glen, and Forestville, as well as wines for other companies under contract. Franzia knows how to find a bargain. He buys land, labels, wines, and grapes when the prices are low.

The best example of Franzia's business acumen when it comes to a bargain acquisition (and later, product) is the Two Buck Chuck story. In 1995, Franzia bought the Charles Shaw label from a Napa Valley winery in bankruptcy.  Franzia didn't do anything with the label until 2002. That year the wine market was flooded with excess inventory.  Grape prices took a severe nose dive and wineries had to sell off their product in bulk and at a loss. Bronco became one of the very few success stories of the year when it made a deal with Trader Joe's to sell an extreme value wine for $1.99 (in California. Outside of California the wine was typically $3.99). Since Bronco had its own bottling facility and distribution system, the company could produce this rock bottom priced wine and still make a profit.  To do so, the company resurrected the Charles Shaw label and Two Buck Chuck was born.

Bravo was named winery of the year at the 2003 United Wine and Grape Symposium largely due to the overwhelming success of the Charles Shaw label. When the announcement was made, the ballroom full of wine makers erupted in disbelief and contempt.

For years, Charles Shaw has chugged along offering a very affordable alternative for wine drinkers.

Recently,  a blog post  that originally appeared on the website Quora in 2011 made its way to Huffington Post. It was called "So That's Why Trader Joe's Wine Is So Cheap!" and it made some shocking allegations about the budget wine.  Wine shop owner Chris Knox went on a rant about how he thought Franzia was able to keep Two Buck Chuck at such a crazy low price:

"These large tractors with huge claws go down the rows of vineyards grabbing the grapes and depositing them in its huge receptacle. And it not only grabs ripe grapes, but unripe and downright rotten ones as well and throws them all together. Add to that leaves, stems and any rodents, birds, or insects that may have made those vines their home—they all get thrown into the bin as well. And guess what? You think there's going to be any sorting when that truck arrives at the winery (or should I say processing facility)? Nope. Everything, and I do mean everything (including all those unripe grapes, rotten grapes, leaves, stems, birds, rodents, and insects) gets tossed into the crusher and transferred to large tanks to ferment. If you were to taste that wine right after it was made, I guarantee you it would be undrinkable. They will then manipulate the finished wine in whatever way necessary, including adding sugar or unfermented grape juice if needed to make the wine palatable. And then the wine goes into bottling, packaging and shipping facilities, all of which Fred Franzia owns himself. They then get put on trucks (also owned by Fred Franzia) and shipped to Trader Joe's."

To be fair, none of Knox's claims have been substantiated and, in an age of larger wine production, MANY wineries use mechanical picking machines.  There was simply not a lot of logic in Knox's accusations, yet the Internet and mainstream media outlets ran with it.  But consider this – why would a man who has made hundreds of millions of dollars selling wine jeopardize his entire business just to avoid paying out a couple of million for filtration systems , equipment, and experts to make sure that his wines are safe to drink?  Ask yourself if a guy whom even his competitors and detractors say is a very smart man would be stupid enough to carelessly let even one consumer get sick and possibly die from drinking a cheap wine. And make no mistake, if one person were to get sick and/or die because of unsafe wine making practices, it would put an end to the wine making careers of every Franzia. This is one of California's preeminent wine making families, it doesn't  make sense that they'd jeopardize their legacy for a $2 bottle of wine.

In 12 years, Charles Shaw has sold 800 million bottles of wine. Needless to say, this three year old blog post has Fred Franzia seeing red.  As mentioned Franzia does use mechanized harvesting, as do many grape growers. However, the machines are designed to shake loose everything BUT the grapes, which are then picked. Furthermore, there are other methods in the production process that filter out any leaves, twigs, or animal residue that may have made its way into the grapes.

This is far from the first, nor will it be the last attack on Fred Franzia's extreme value wine making. It is his mission to make wine so affordable and plentiful that every American can afford to buy a decent bottle.

And for all the hullabaloo Franzia has created amongst Napa vintners, he is actually helping them in that Two Buck Chuck introduces customers to wine. As their palettes become more discriminating and bank accounts grow Franzia is, in a way, introducing new customers to the more elitists vineyards that consider him and his Two Buck Chuck the bane of the California wine industry.