By B. George Young on September 3, 2015 in Articles › Entertainment

If you have ever been to an IKEA store, you know how hard it is to get out of the store in a timely manner. The stores have everything you could need to decorate your home, all with interesting sounding Swedish names (and don't forget the Swedish meatballs). What you may not know, is that a man named Ingvar Kamprad is the founder of IKEA and he has a truly inspiring rags to riches story.

IKEA has been in business for over 70 years and has helped Kamprad become one of the richest people in the world, with a net worth of $42.5 billion. He did it the hard way and is one of the wealthiest self-made billionaires on the planet. As a young boy, business was in his blood. Kamprad's first venture included riding around on his bicycle selling matches to his neighbors.

Ingvar was born on a farm in Sweden in 1926 and started his business tactics at just five years old. He would buy matches in bulk and sell them individually to make a small profit. By the time he was 10 years old, Ingvar was selling other things like Christmas tree decorations, fish, pens and pencils, and seeds. He hit some rough patches and was inspired by his grandmother to join a Nazi youth movement which he has described as "the greatest mistake in my life." Kamprad felt so bad and wanted to move past the situation that he wrote a letter to his company's employees asking for their forgiveness. 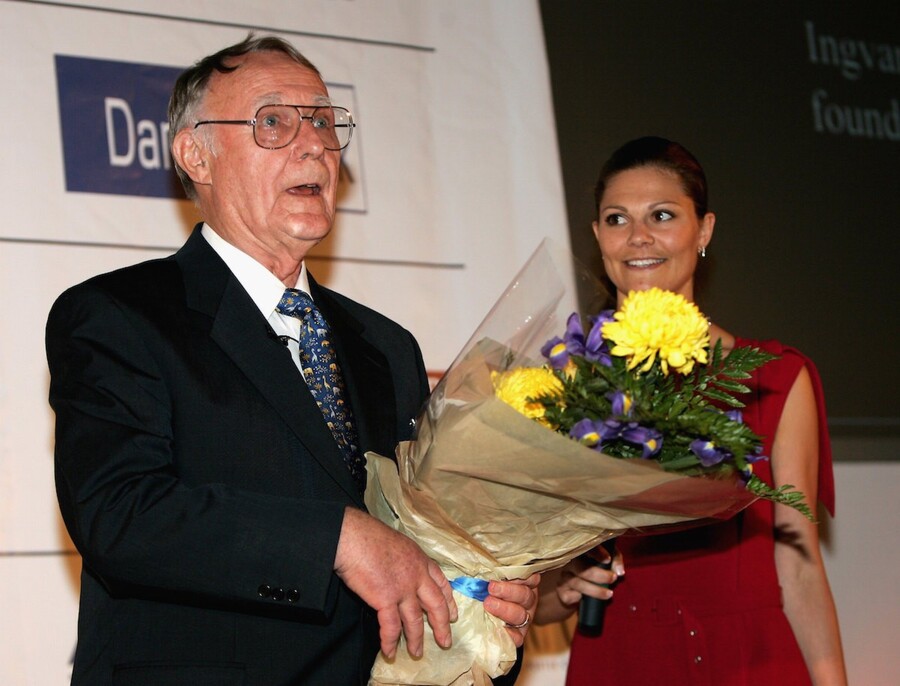 Kamprad did not use the excuse that he was dyslexic and was still able to well in his studies. His father gave him some cash for his performance at school and Ingvar decided to use it as seed money to start IKEA in 1943. The company started off selling smaller household goods, like picture frames, and did not expand into the furniture market for another five years.

If you've ever wondered what IKEA means, the first two letters are the founder's initials. The E comes from the name of his family farm Elmtayrd and the A comes from his village Agunnaryd. Kamprad introduced the "flatpacking" concept in 1956, which allowed IKEA to reduce costs by letting the customers put their furniture together when they got it home. In 1973, he relocated the company's headquarters from Sweden to Copenhagen for tax purposes. IKEA is now based in the Netherlands while Ingvar has returned to living in Sweden.

Ingvar's youngest son Mathias took over as Inter IKEA holding SA's chairman in 2013. His brothers Peter and Jonas are also involved in the company, while Ingvar continues to serve as a senior advisor and chief decision maker. Ingvar decided not to take his company public and said that he "decided that the stock market was not an option for IKEA." There have been two books published about IKEA you can read if you want to learn more about Kamprad's amazing story: A Testament of a Furniture Dealer and Leading by Design: The IKEA Story, which is an autobiography.

Kamprad does not live large like some other billionaires do. He is modest and prefers to travel economy class, or even second class by train. He has been driving the same Volvo for 20 years and doesn't even splurge on expensive hotels. He has never borrowed money and has helped IKEA reach 47 countries and 370 stores. Speaking of those Swedish meatballs, IKEA Food Services alone did $1.8 billion in sales in 2014.

At 89 years old, Ingvar Kamprad doesn't plan on going anywhere. "Oh, I have so much work to do and no time to die" he said coyly. So the next time you visit an IKEA store to purchase a Malm or a Blanda, don't forget about Kamprad and how much hard work he has put into the company (and don't forget to try the meatballs).