Meet The Hollywood Hotshot Who Gave Up a Massive Salary, Sold All His Possessions And Launched A Cambodian Children's Charity.

By Amy Lamare on June 2, 2014 in Articles › Entertainment

As you might imagine, Hollywood is one of the most self-serving and greedy industries in the world. Behind the glamour and glitz, you'll find a cut-throat industry that is rife with self-serving narcissists clawing their way up the entertainment food chain, kicking aside anyone who gets in their way. I don't think it's controversial at all to say that most people in Hollywood have one shared mantra: More. More money. More cars. More mansions. More of EVERYTHING.

For a time, Scott Neeson was definitely caught up in the Hollywood rat race. After years of struggling up the executive food chain, by 2003 Neeson had finally managed to achieve the Hollywood dream. He was a President at a major studio, he had a million dollar salary, lots of power, a fat expense account, multiple sports cars, a mansion and a Rolodex full of A-list contacts. Neeson's social calendar was jam packed with ultra-exclusive parties and events that most of us would kill to attend. And then one day, seemingly out of the blue, Scott gave it all up. But it didn't stop there. After quitting his job, Scott shocked friends and family as he proceeded to sell off all his earthly possessions and announce that he was moving to Cambodia. Cambodia??? How on earth can this happen? Did the pressures of Hollywood cause a mental breakdown? Was Neeson fleeing criminal charges? No, nothing like that. As it turns out, Scott's 180 degree life-change was inspired by a side-trip to a garbage dump during a random vacation. Every once in a while you hear about someone who truly restores your faith in humanity. Scott Neeson is definitely one of those people… 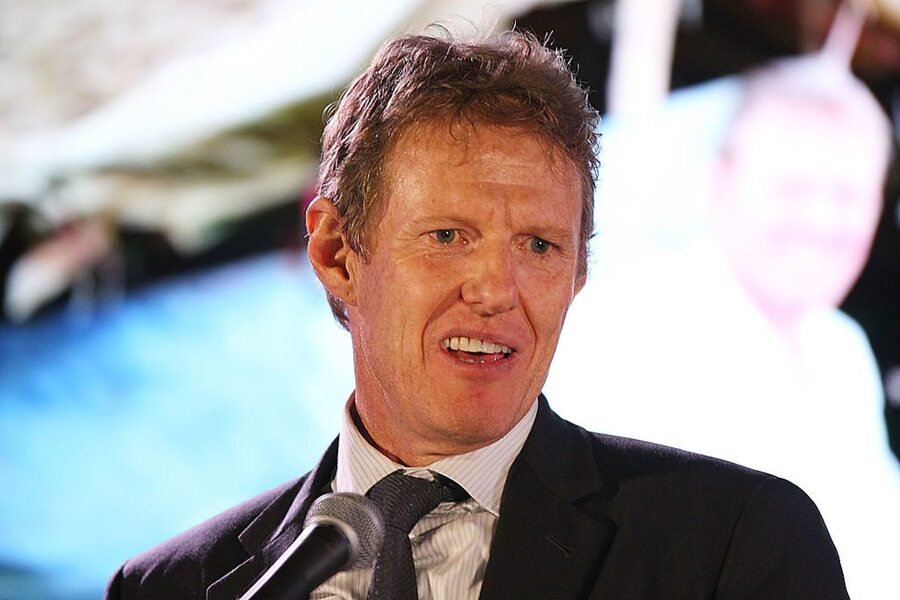 Scott Neeson didn't take the likeliest path to becoming either a studio head or running a children's charity. He was born in Scotland and grew up in Elizabeth, Australia, a suburb of Adelaide, in a working class neighborhood. His father worked for the Department of Defense. His mother was a cleaning lady. As a kid, Scott was scrawny and unhappy – both at home and in school. Teachers told him he'd never amount to much and would end up unemployed and on welfare.

Neeson dropped out of high school and got a job delivering movie posters to theaters. Improbably, he turned that into a career, ascending to the highest levels of studio management. First he became a projectionist, then an assistant to the director of movie programming, and eventually he was promoted to managing director of an Australian film distribution company. That company later merged with Sony.

Even though Neeson didn't have an Ivy League education and MBA pedigree that many of his peers in the American film industry executive ranks had, by 1993 Scott had moved to the U.S. to be Vice President of International Marketing for Fox. Over the next decade he absolutely excelled at his job and zoomed up the corporate ladder. He was promoted to President in 2003. Colleagues have cited his ambition as a key component in his success. During his illustrious Hollywood career, Neeson oversaw the releases of blockbusters such as "Titanic", "Braveheart", "Independence Day", "X-Men", the "Star Wars" prequel trilogy and more than 100 other films.

So the kid who was told he'd never amount to much ended up running a major film studio, pulling in a $1 million dollar salary, and living two doors down from Cindy Crawford in Los Angeles's tony Brentwood neighborhood. Scott Neeson was living a life he'd never dreamed of. And then he saw a life so horrible he never dreamed could exist.

It was December 2003, and Scott was vacationing in Cambodia. Though lesser known in Western circles, Cambodia is actually home to some of the most beautiful beaches in the world. Dunk your head in the crystal clear, perpetually warm waters, and you will see a Finding Nemo-esque world of exotic tropical fish and coral reefs. Offshore travelers can explore gorgeous waterfalls, ancient temples and much more. Who wouldn't want to spend a week sitting on a beach like this?

Unfortunately, as is often the case with tropical paradises, just a few miles away from the steel-drums, conga lines and pina coladas is a much darker world. Neeson wanted to experience that flip side, so one day he decided to visit the notorious Steung Meanchey garbage dump, far away from the crystal clear waters and pristine beaches. At this dump, Neeson was stunned to see a little girl dressed in rags picking through the garbage. She was stepping on syringes, broken glass, and rodents to look for anything of meager value that could be sold for money to buy food. Even worse, this little girl actually lived in the garbage dump with her mother and younger sister.

Neeson could not comprehend the horror he was seeing – especially when he compared it to his life back home in Los Angeles. After he stepped into that nightmare at the Steung Meanchey garbage dump, Neeson was never the same. The contrast of what he was seeing at the dump compared to the wealth and glamour of his comfortable LA life was almost overwhelming.

The differences between his typical Hollywood life of lavish excess and the plight of poor Cambodian children became even clearer on his second trip to Phnom Penh. A few months after his December 2003 trip, Neeson was once again at the dump. He was in the middle of trying to help three sick children, when his cell phone rang. On the other end was an agent whose big superstar client was having an epic meltdown because apparently the superstar's private jet wasn't sufficiently stocked! Oh the humanity! Apparently the jet was missing several of the star's favorite snacks, beverages, and other amenities. As head of the film studio producing the star's film, Neeson was somehow being held responsible for this unconscionable mistake. Can you imagine that poor multi-millionaire actor trying to fly on that ultra-luxurious private jet WITHOUT his very specific favorite kind of bottled water??!!

As this conversation was unfolding, Neeson was literally standing knee deep in a garbage dump that hundreds of children called home. As if this wasn't crazy enough, at some point, the spoiled actor had the nerve to exclaim (without any irony): "My life wasn't meant to be this difficult!"

Meanwhile, through the haze of toxic fumes and burning waste, swarms of Phnom Penh's most destitute children were digging through the garbage, fighting for scraps of recyclables in recently dumped loads of trash. If they had a good day, they earned $1… if they were lucky. This experience felt like a giant, blinking, neon sign to Neeson.

That disgustingly shallow complaint from a selfish spoiled actor was the straw the broke the camel's back for Scott Neeson. Neeson hung up the phone and decided AT THAT MOMENT to dedicate his outsized ambition towards helping some of the world's poorest children. After a 26-year-career in the film business, Neeson decided he was done.

Upon his return to Los Angeles, Neeson sold his mansion, his yacht, and his cars. He held a garage sale to rid himself of most of his material possessions. He quit his job and, very soon after, moved to Cambodia where he founded the nonprofit Cambodian Children's Fund. He was now 100% dedicated to a new mission: To save as many of the poorest children in one of the world's poorest countries, as his resources and efforts would allow.

Fast forward and today and Neeson has been living in Cambodia for 10 years. He is as ambitious as ever, except now he was is focused on more substantial things in life. His day still starts at dawn with a cup of coffee from his espresso machine – the one luxury he still allows himself. He only leaves Cambodia on fund raising trips — taking the negotiating skills he honed during his former career at the top of Hollywood. Now, instead of trying to make fluffy movies Scott uses his considerable skills to convince desperate and starving parents to enroll their kids in the school he started, or bring a sick baby to the clinic he set up.

There is a similarity between these poor and sick children and the scrawny, unhappy child Neeson was back in Australia. These Cambodian children he has dedicated his life to helping are mired so deep in poverty that they don't see a way out. These kids don't believe they can do anything with their lives. Neeson has set out to change that, and for that he has that first little girl he encountered in December 2003 to thank. Her name is Srey Nich. Neeson used his own money to get her and her family out of the garbage dump and into a house. She then became one of the very first students at Neeson's Cambodian Children's Fund school. She now plans on enrolling in college. Neeson changed her life, as he has changed and is changing hundreds of Cambodian children's lives through his work with CCF.

His days are spent checking in on families he knows are in need, and following up with students living in the area. Instead of managing movie stars' egos and demands, Neeson now visits the CCF Satellite schools, rescues young children who have been abandoned or who are in real need of CCF services and education. He manages the executive offices of the foundation, maintains relationships with sponsors and dignitaries around the world, and also takes part in student conferences and award ceremonies—never forgetting the real reason he walked away from his Hollywood life.

Vocational training is also available to mothers who have children enrolled in CCF's Education Program through a program at the Srey Meanchey Garment Centre. This Program not only covers garment design and construction but also money management skills such as budgeting and saving and life skills such as hygiene. It also provides advocacy that helps Cambodian women understand their rights as women, their rights in relation to domestic violence, and the rights of their children.

CCF also provides a college education, investing in developing the leaders of tomorrow's Cambodia. More than 1,450 students attend CCF schools. After learning cooking and customer service skills in the Star Bakery and Star Restaurant, more than 100 students have landed jobs in restaurants and hotels. The CCF's free medical clinic has three full time doctors and seven nurses treating more than 3,000 patients every month.

Oh, and by the way, that garbage dump Scott Neeson first encountered in 2003 has been shut down.

Scott Neeson is truly one of the most incredible people on the planet today. He gave up his Hollywood life and never looked back. Today his life is a million times richer even after giving up his million dollar salary. We need more Scott Neesons in the world, especially here in Hollywood. He is the real Braveheart!

If you're interested in making a donation to the Cambodian Children's fund you can do so by visiting this page. We just made a donation on behalf of CelebrityNetWorth.com. Join us in supporting this amazing cause!