Meet The Family That Built Their $14 Billion Fortune On OxyContin

There was a newcomer to this year's list of America's Richest Families. The Sackler family burst onto the list in a big way, cracking the top 20. In fact, this family has a net worth higher than that of the Rockefellers, Mellons, and Busches. They built the 16th largest fortune in the country on the back of a popular painkiller. The Sackler family owns Purdue Pharma. Their company has sold more than $35 billion in medication since it hit the market, with their supposedly addiction-proof painkiller, OxyContin, in 1995. Purdue Pharma makes approximately $3 billion per year, mostly from U.S. sales of OxyContin. The Sackler family also owns a number of other drug companies that peddle their pills in Canada, Europe, Asia, and Latin America. Those companies' combined yearly income adds another $3 billion to the mix. The combined worth of their drug companies and respective dividends over the years puts a conservative estimate of the Sackler family's net worth at $14 billion. This is the story of how decades in the pharmaceutical business finally paid off for this family, and how lawsuits over their popular pain medicine may threaten this family's billion-dollar bottom line.

Their big payday with the painkiller came more than 40 years after brothers, Arthur, Mortimer, and Raymond Sackler bought a small drug company in New York City in 1952. The brothers were the sons of poor eastern European Jewish immigrants who ran a corner grocery store in Brooklyn.

At the time they started their drug company, the brothers were all practicing psychiatrists. Their company specialized in small time pharmaceuticals like laxatives and ear wax remover, but Arthur was an ambitious sort. In addition to being a psychiatrist, he was well known in the field of medical advertising and is largely credited with helping Pfizer establish itself through scientific papers he authored. The Medical Advertising Hall of Fame attributes the fact that Valium became the first $100 million drug with work Arthur did on its behalf.

Arthur passed away in 1987 at the age of 73. Following his death, Mortimer and Raymond picked up their late brother's ambition and took Purdue Pharma into a new arena – pain medications. This led to their effort to take the generic painkiller oxycodone, which had been around since World War 1, and integrate a time-release component into the pill in which it's delivered. They called their new painkiller OxyContin. This would make the pill addiction proof, or so they claimed, and also allow the brothers to market the painkiller beyond its traditional market. Before the time-release component was added, oxycodone was a powerful opioid, used primarily for cancer patients. The Sackler brothers launched OxyContin in 1995. It did not take long for doctors to begin prescribing the new painkiller to treat a wide range of painful symptoms. By 2002, sales of OxyContin had soared to $1.5 billion. 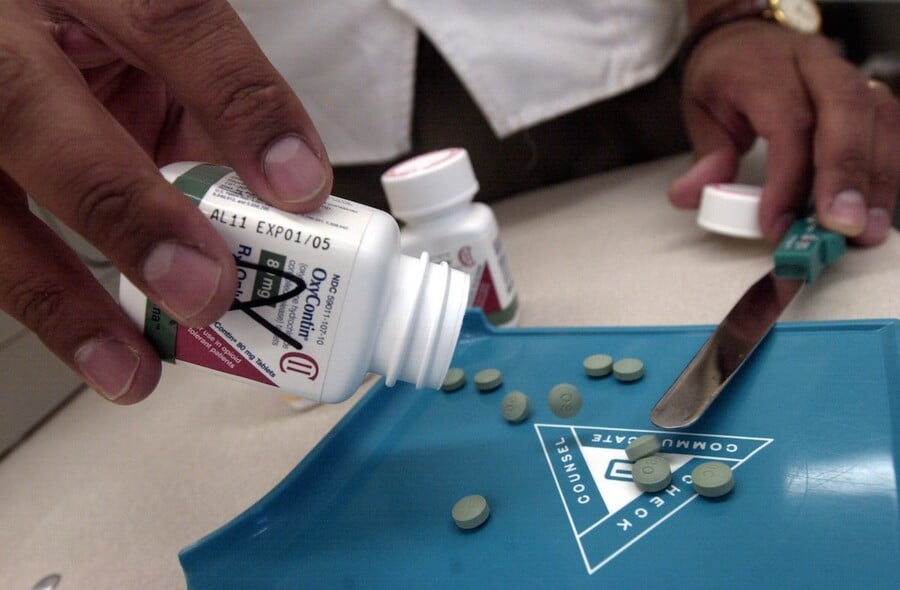 The Sackler family had hit the big time. However, OxyContin proved to not be as addiction proof or abuse resistant as it was initially thought. Enterprising addicts looking for a fix found that crushing the pills would destroy the time-release mechanism. People began snorting the powder for a high that is similar to heroin. You know what came next – addiction, overdoses, and death. Purdue Pharma found itself under fire. Allegations were being lobbed at them that said they purposefully misbranded OxyContin as less addictive than it actually was. In 2007, Purdue pled guilty to false marketing charges to the Department of Justice and paid $635 million in fines.

Purdue Pharma is still 100% owned by the Sackler family. None of the Sacklers have personally been charged in the many lawsuits against Purdue Pharma.

In recent years, the company reformulated OxyContin, making it incredibly more difficult to abuse. However, the company is still dealing with lawsuits from a decade of the abuse of its most famous and profitable product. A complicated case brought against Purdue Pharma by the state of Kentucky alleging false marketing has been in the court system since 2007. The company faces a possible fine of more than $1 billion. Purdue Pharma steadfastly denies any wrongdoing, citing precedence of other cases against the company that were dismissed when the evidence could not back up the false marketing charges. After all, their attorney argued, the marketing didn't cause the abuse.

Next up, Purdue plans to release a competitor to the all-hyrdocordone drug, Zhoydro. Its Hysingla won FDA approval last November after the company proved that it could formulate a pill that was not able to be abused either orally, through snorting, or by injection. Zhoydro cannot make these same claims. This new generation painkiller could bring the Sackler family many additional millions in profits.

Of the three founding Sackler brothers, Raymond – at 94 years old – is the only remaining living co-founder of the family-owned drug company. An estimated 20 Sackler heirs share the $14 billion fortune.

The Sackler family has a deep philanthropic bent as well. They've given large donations to the Metropolitan Museum of Art, the Guggenheim, the Tate Gallery, the Smithsonian, and the Louvre. Education is also a beneficiary of their largess with gifts to Harvard, Columbia, Tufts, NYU, Oxford, and the University of Edinburgh.

What do you think? Is there a moral imperative for the Sacklers to make sure their most famous product isn't abused? Or should they sit back and continue to reap the profits?