By Amy Lamare on October 6, 2014 in Articles › Entertainment

Elizabeth Holmes was born in Washington, D.C. in February 1984. The family moved to Houston in the early 90s. Elizabeth's father, Christian Holmes IV, worked for various government agencies including the United States Agency for International Development (USAID) in the U.S., China, and Africa. Her mother Noel was a Congressional committee staffer. Elizabeth is a descendant of one of the founders of Fleishmann's Yeast Company. As a child, Holmes read the biography of her great-great grandfather Christian R. Holmes, who was a decorated World War I veteran as well as a surgeon, engineer, and inventor. He was dean of the University of Cincinnati College of Medicine and he inspired his great-great granddaughter to go into the field of medicine. These medicine plans were temporarily put aside when young Elizabeth discovered that she, like most of us, had a fear of needles. 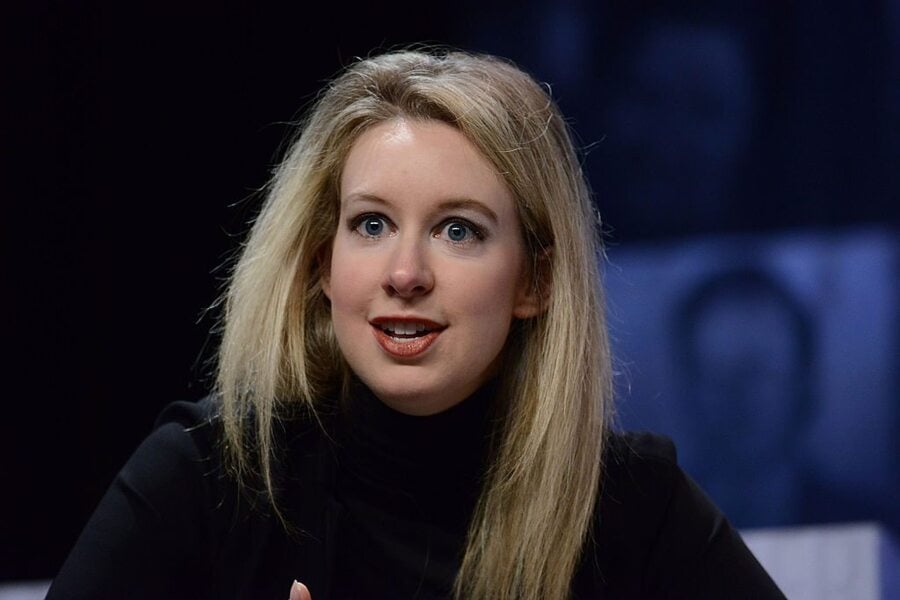 Elizabeth and her brother Christian had always been intrigued by their dad's work in China, so they actually taught themselves Mandarin Chinese at a young age. This would come in handy when Holmes spent her teen years in China while her dad was on assignment. While living in China, she started a business selling C++ compilers to Chinese universities. She was still in high school.

Elizabeth enrolled at Stanford in 2002 and chose electrical and chemical engineering as her major. As a freshman, she was named one of the "President's Scholars" and given a stipend of $3,000 to pursue a research project of her choice. Holmes convinced her chemical engineering professor, Channing Robertson, to use the money for a project in his lab. She enrolled in Mandarin classes over the summer at Stanford to beef up her Chinese language skills and she soon landed an internship at the Genome Institute of Singapore. At the time, this institute was working on developing new ways to detect the SARS virus in blood or nasal swabs.

One of Elizabeth's first realizations was that there had to be a better way to conduct the blood tests. When she returned to the United States, she wrote a patent application for a wearable patch that would administer a drug, monitor the variables in the patient's blood, and adjust the dosage accordingly. She took the patent application to her chemical engineering Professor Robertson and explained that eventually a cellphone chip could also be put on the patch for telemedicine. In September 2003, Elizabeth Holmes filed the patent application as "Medical device for analyte monitoring and drug delivery."

In the fall of 2003, when Holmes was a 19-year old sophomore at Stanford she decided to use the money her parents had saved for her tuition to start a company called Real-Time Cures in Palo Alto. She later changed the name of her company to Theranos, a mash up of therapy and diagnosis because she felt that too many people had an unfavorable, even cynical, reaction to the word "cure". A semester later she dropped out of Stanford to pursue her business full time.

It took a decade for her ideas to be ready for the market. And over that decade the company grew slowly and ended up raising $400 million in venture capital from investors like Larry Ellison and Draper Fisher Jurveston, among others. 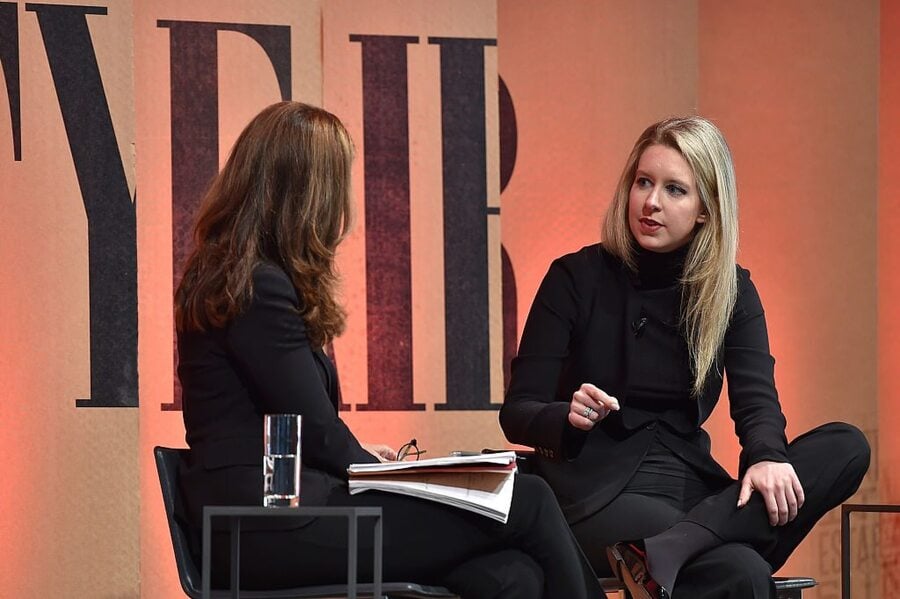 For much of the last 10 years, Theranos has been in stealth mode, keeping their plans extremely secretive to avoid tipping off potential competitors. Holmes took the secrecy of Theranos very seriously, even taking three former employees to court in 2007, accusing them of misappropriating trade secrets.

Traditional blood testing is difficult, uncomfortable, and expensive for a procedure that is used so commonly. There hasn't been any real innovation in the process since the 1960s. In both hospitals and doctors' offices vials of blood are drawn and then have to be sent out to be tested. This can take weeks for results to come in and is prone to a high degree of human error. And of course, there are some people who are so afraid of needles they will go to all costs to avoid having blood drawn.

The implications of Holmes' invention are simply mind-blowing. She has made it inexpensive, fast, and easy for people to have access to important information about their health. As diagnostic tests evolve, Theranos could actually allow people to head off life altering diseases like cancer and diabetes before they happen.

Think about it, one lone drop of blood, (which is taken completely painlessly by the way) can know give you a ton of information about your health.

In 2013, Walgreens announced that they were opening Theranos Wellness Centers in pharmacies across the country. Locations are already open and running in Palo Alto and Phoenix. So how does the technology work exactly? There is a ton of technology behind Theranos. The company's processes and methods are protected by more than a dozen patents filed (and granted) between 2004 and 2014.

In order for Theranos to work, Holmes and her team had to develop new methodologies that would make giving faster results possible. That didn't exist with the old way of doing blood tests. In Holmes' own words:

"In the case of a virus or bacteria, traditionally tested using a culture, we measure the DNA of the pathogen instead so we can report results much faster."

Holmes chose to focus on upending the way blood tests are done because that one procedure drives roughly 80% of the decisions and diagnoses made by doctors. Holmes focused on the inefficiencies in the old methods and then used Theranos to revolutionize the process.

Testing with Theranos can be done without going to the doctor, which is an obvious savings of time and money. Most results are available in four hours, so you could go to a pharmacy and have a test done the day before a doctor's appointment and the next day, your results would be available to your doctor. The fact that these tests can be done so quickly and easily and results delivered so fast is one thing, but the amount of data Theranos can extract from a single drop of blood is nothing short of amazing.

Most of us have experienced the inefficiencies of the current way blood tests are done. You get blood drawn for one test, but if a follow-up was needed yet another sample has to be drawn, and you go through the long process of waiting for results again. With Theranos, one drop of blood can be used for dozens of tests for a range of conditions and diseases. 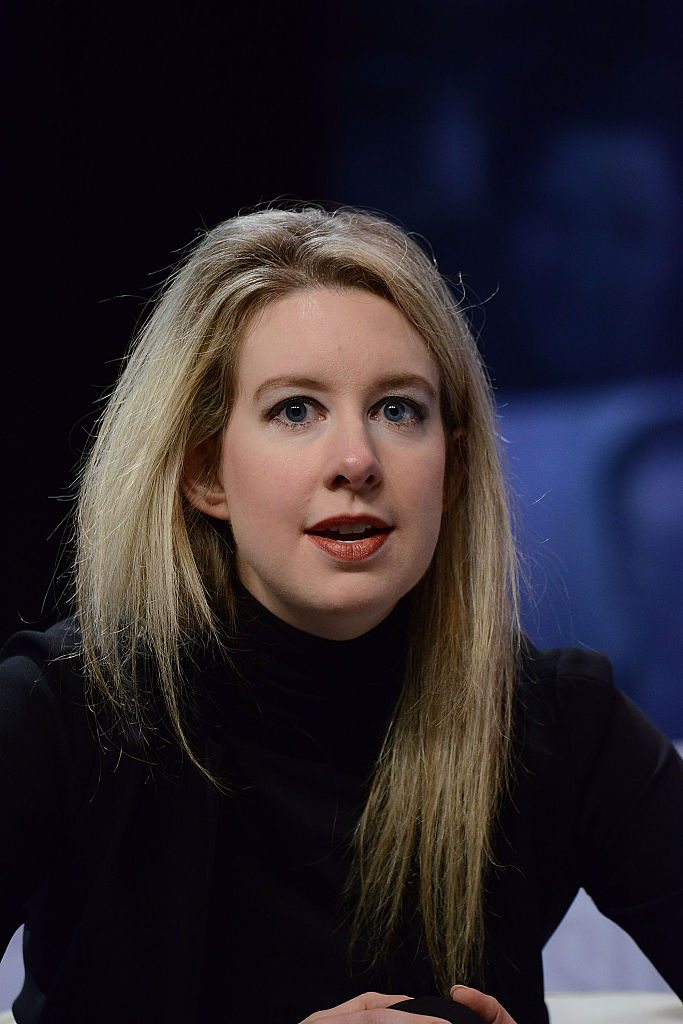 And if that isn't cool enough, Theranos is also CHEAP!. Have you ever tried to figure out your healthcare pricing? One thing is covered but another isn't and a third is only if certain conditions are present. It's enough to drive someone crazy. Theranos lists all of its prices clearly on its website. Each test is 50% less than the cost of standard Medicare and Medicaid reimbursements.

For instance, if you take a look at the average cost of a fertility test, usually not covered by insurance, it can cost up to $2,000. With Theranos, that same fertility test is just $35. And, even more impressive, patients get access to their own results. This is an amazing benefit for patients who are trying to have a better understanding of his or her own body. Theranos is now licensed to operate in every state in the U.S. It offers 200 tests and has about 500 employees.

Theranos is still private, but recent investments have valued the company at $9 billion. Elizabeth Holmes owns 50% of Theranos. At a $9 billion dollar valuation, her stake is worth $4.5 billion! She is 30 years old.

Holmes also has 18 U.S. patents and 66 non-U.S. patents in her name. She is the co-inventor on more than 100 patent applications. While her net worth is largely on paper, she is the youngest self-made female billionaire in the world and the 111th richest American. She is also hopefully changing the image most people think of when they hear the words "30 year old Silicon Valley billionaire"!