By Paula Wilson on November 9, 2020 in Articles › Entertainment

We would all like to believe that we would do something for nothing. Sadly, that's not usually the case. If there is money involved, people will often do whatever it takes to get the most from those around them. Pharmaceutical companies are notorious for this, and charging exorbitant fees for life-saving drugs is so prevalent, that it's considered completely normal. Most of us don't even bat an eye. It means that those without money have far less access to the medicines that could have a positive impact on their health. In fact, according to the World Health Organization, 90% of all medicines produced in the world are used by the richest 15% of the world's population. Of the other 10%, approximately 8% goes to middle-income people, and approximately 1% goes to the poor. Which is why it is so amazing to hear when someone does something truly altruistic in the medical community. Jonas Salk and Albert Sabin were two of these rare people. Both doctors saved an entire generation of kids from the horrors of Polio. Both doctors actively chose not to patent their creations and therefore forfeited billions of dollars in potential royalties.

Jonas Salk, was born on October 28, 1914 in New York, New York.  He showed a high level of intelligence and a curious mind early on, and when he was thirteen, he was accepted to Townsend Harris High School. Townsend Harris was for gifted students who didn't have the funds, or the family connections, to attend one of the area private schools. The schedule at Townsend was notoriously rigorous and intense, since it crammed four years of high school in to just three years. However, Salk excelled. He then went on to attend the City College of New York (at age 15). He was originally interested in pursuing a career in law, but his mother convinced him to shift his focus to medicine. After graduating from City College in 1934, he went on to attend the New York University School of Medicine. It was while he was a student at NYU, that he began to focus on research. Unlike many of his peers who were interested in becoming practicing doctors, Salk found himself fascinated by the inner workings of the human body. He spent time studying biochemistry, in addition to his regular class work, and then shifted his focus to bacteriology. His goal? He wanted to "help mankind in general rather than single patients". 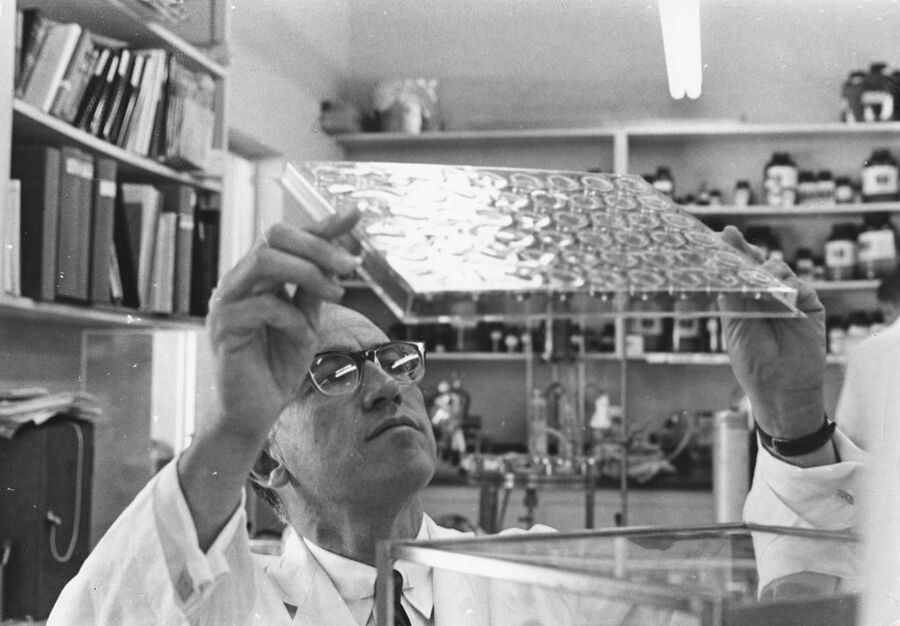 His post-graduate work led him to the laboratory of Dr. Thomas Francis at the University of Michigan. Francis was credited with discovering the Type B influenza virus. Work in Francis' lab was Salk's first exposure to virology. Salk's interest in that field of study quickly took over. He received a coveted residency placement at Mount Sinai Hospital, and made a name for himself as a virologist, as well as gaining a reputation for being an excellent clinician and surgeon. After his residency was completed, he found it difficult to secure a research position. Though he was clearly qualified, most medical programs had a quota on the number of Jews they would accept. He was turned away from multiple programs. Dr. Thomas Francis came through for him and offered him a research position at the University of Michigan, where he was now the full-time director of the medical school. Salk spent the next few years developing a flu vaccine. His work, while successful, was not without controversy. Salk apparently tested the vaccine by administering it to mental patients at an asylum in Michigan, and then deliberately infected them with influenza to see if his vaccine worked. None of the patients ever gave their own consent, and many of them may not have understood that they were guinea pigs.

Salk then decided to branch out on his own. After multiple rejections, he was offered his own research lab at the University of Pittsburgh School of Medicine. However, the "lab" the university promised, was actually just a large open space in a basement with no equipment. He raised the funds for his own equipment through grants and began doing his research again. He was subsequently invited to work on a polio vaccine by the National Foundation for Infantile Paralysis. At that time, polio was basically wiping out a generation. Cases of polio mushroomed from 27,000 cases in 1916, to nearly 60,000 in 1952. It was most devastating to children as parents began keeping their kids home from school, isolating their children in an effort to keep them healthy. Finding a cure, quickly, was vital. Salk was fighting an uphill battle. He gathered a small group of innovative, passionate researchers together to work with him, and they got to work. Unlike many of his peers, Salk chose to develop a killed virus vaccine. Too many children had been killed or paralyzed during other trials of live virus vaccine. Throughout the early 50s, he tested his vaccine on animals successfully, and then moved on to children, including his own family. When his vaccine finally went to full trial in 1954, 1.8 million children participated. In 1955, the vaccine was declared a success.

Salk was an almost instant celebrity, a change in fortune which he was never comfortable with. When asked "Who owns the patent?", his reply was "Well, the people, I would say. There is no patent. Could you patent the sun?". For him, it was never about fame or money, but about the search for a cure, the search for a way to make positive change, the search for a means to save lives. While pharmaceutical companies may want to put a price tag on that, Dr. Jonas Salk never had any interest in putting a price on saving lives. If the polio vaccine had been patented, it would be much more expensive than it is now. If it was more expensive, it would have made it nearly impossible for developing countries to afford it. Rather than being nearly eradicated, polio might still have been a major issue in numerous countries around the world. However, because of Salk's knowledge, and his generosity, polio is largely a thing of the past.

So how much money did Jonas Salk forfeit by not patenting his polio vaccine? It's tough to calculate an exact number, but most scientists agree that the amount was easily in the billions of dollars. His patent would have lasted 20 years, from roughly 1955 to 1975. And in that time, it is estimated that with a traditional patent, Dr. Salk would have earned approximately $500 million worth of royalties. That's equal to $2.2 billion after adjusting for inflation.

Interestingly, even though we all think of Jonas Salk as the main person most responsible for eradicating Polio, his colleague Albert Sabin actually had an even bigger impact around the world. Albert Sabin invented a vaccine right after Salk. The Sabin vaccine was different in a few ways. First, it was administered orally instead of intravenously. Second, unlike Salk's vaccine that was built off a dead version of the virus, Sabine's actually was built off a live virus that had been weakened. This method was arguably more effective in fully eradicating Polio, instead of just preventing it. Most importantly, an oral vaccine was much easier to administer to kids than a big scary needle. For those two reasons, the Sabin vaccine actually became the global standard for polio.

Albert Sabin also chose not to patent his vaccine. By giving his drug away for free, it is estimated that by 1976 (the year his patent would have expired) Sabin would have earned approximately $1.2 billion from royalties. That's equal to $5.3 billion after adjusting for inflation!

If you were a scientist and you came up with a vaccination that could potentially turn you into a billionaire, what would you do? Would you take the money and run or give the drug away for the good of humanity?