By Paula Wilson on October 21, 2014 in Articles › Entertainment

When you were eight years old, what kind of stuff did you make? For most of us, making stuff while we were in elementary school was about drawing or painting pictures for our parents or caretakers. Or maybe you were in to making collages? How about ant or worm farms? Building those in a jar was all the rage for a bit. It probably didn't occur to any of us to make a million dollars when we were eight. A million was one of those unimaginable numbers, like people who said they were super old, like, 30. For Evan, a second grader who posts product reviews on YouTube, making a million is all in a day's work. His videos have earned him a whopping $1.3 million thus far. That makes him one of the highest paid Youtube stars in the world. His average take per year is $41,000, and that's after splitting the ad revenue with YouTube. So – what's his secret? It may have something to do with the fact that he's cute as a button, says exactly what he thinks, and has no clue how famous he has become.

Evan, whose last name is unavailable anywhere, is actually just your average kid. He goes to elementary school, hangs out with his friends and family, does his homework, and goes to karate practice. His parents have been adamant about keeping him a kid, even as his online popularity grows. (Hence the no-last-name-available policy.) They have also worked very hard to keep where the family lives out of the public eye. So far, even with major articles in Newsweek, Business Insider, and The Huffington Post, their strategy seems to be working. 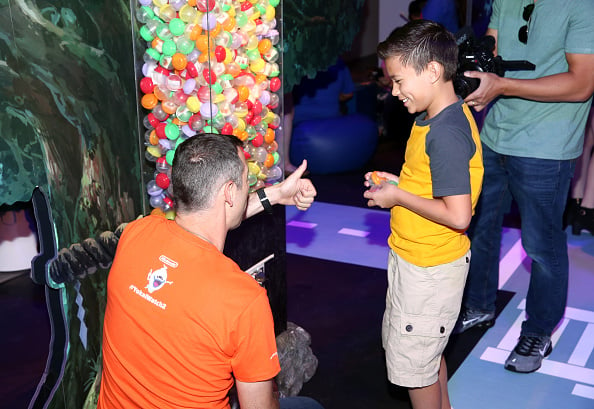 EvanTubeHD, Evan's popular YouTube channel, grew out of a father-son animation project. Evan's father, Jared, runs his own photography and video production company. The duo began making stop-motion "Angry Birds" videos together for fun. They turned out pretty well, so Evan asked to post them on YouTube so that he could share them with friends. They made a video per month initially. Then something strange started happening. People began to watch their videos in droves. Their channel began to attract subscribers. Then their first video hit 1 million views. Suddenly, their little video project had grown major wings. That's when the product review requests began flooding in from multiple toy manufacturers.

-This video has been viewed 53 million times.

After some discussion, the entire family got involved. Now, Evan reviews toys from the perspective of a regular eight-year old boy, with some help from his Mom and little sister, and his Dad films it all. His product reviews begin with him opening the packaging the toy comes in. The he takes the toy out, plays with it a bit, and gives his unvarnished opinion about it. There's usually a bit of joke/story at the end of each video that makes the reviews more fun and kid-friendly than most. Evan has become a hit with kids all over the world, and his reviews have been viewed a staggering 800 million times. Parents have a slightly love-hate relationship with him. They love that the EvanTube videos are entertaining, safe for all ages, and show a kid being a kid, but they are less enamored with the bazillion requests they receive to buy whatever toy Evan is reviewing that week. In the meantime, Evan is making a pretty penny on ad revenue. Everything he earns goes directly into a savings and investment account. In much the same way that his parents are shielding him from his increasing fame, they are also committed to tucking his earnings away for the future. They have zero interest in creating a screwed-up child star with too much money on hand. Evan's real monetary worth is unknown to anyone except his parents and their accountant. All published numbers are estimates culled from a viewer traffic study conducted by video ad-buying platform, TubeMogul.

For his part, Evan seems happy to make videos with is Dad for his primary channel, and for his two, new spin-off channels – EvanTubeRaw and EvanTubeGaming. When he's not making videos, he's doing his homework. After all, when you're eight, good grades are way more important than a million dollars.