By Beth McDonald on June 3, 2016 in Articles › Entertainment

Businessman and travel blogger Sam Huang really knows how to fly in style. He visited 11 cities, seven countries, and five continents over several weeks in 2015 – all while flying first class and receiving insane perks on Emirates Airlines. This round-the-world trip normally retails for about $60,000, but through research and savvy knowledge of credit card and frequent flyer mile loopholes, Huang paid only $300.

For Huang, who detailed his amazing adventure in a now viral YouTube video and on his blog, TopMiles, flying in an Emirates first-class suite was a decadent, over-the-top experience, typically reserved for jet-set high rollers. With amenities such as complimentary gourmet food and high-end champagne and liquors, an onboard shower spa, lounge area, private mini-bar, and a bed, a typical one-way flight from New York to Dubai for a first class suite seat can set you back over $20,000.

"My first impression of the first class suite was 'WOW,'" wrote Huang on his blog. "You see the pictures online, but only when you actually sit down do you realize how over-the-top the suite really is. There is bling everywhere; gold trimmings line pretty much everything from the table to the LCD screen to the adjustable air duct – everything is designed to wow you." 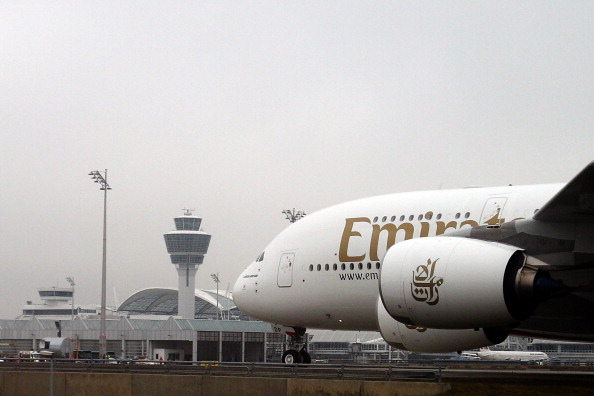 On his many flights, Huang enjoyed luxuries such as caviar, unlimited Dom Perignon champagne and Hennessy Paradis cognac (one of the most expensive cognacs in the world), and trips to the onboard shower spa, complete with heated floor tiles.

"I couldn't stop laughing at how insane it was," Huang recounted on his blog. "Three years ago, I was stuck in coach hating flying, and now I was taking a shower in the sky at 40,000 feet for almost nothing."

Best of all, Huang scheduled many connecting flights with nesting layovers, which are layovers that extend up to 24 hours. That way, he could spend a day relaxing or enjoying the sites in destinations such as Rome, New York, Sydney, and Dubai before his next flight.

So how'd he pull off this ingenious high-flying stunt? According to Mashable, Huang detailed in a now expired blog post, how he accrued 200,000 frequent flyer bonus miles by signing up for multiple credit cards that partner with Alaska Airlines, which also happens to be a mileage partner of Emirates Airlines. "There's some other tricks to earn miles," he told Mashable, "but nothing as big as credit card bonuses."

It took over a year of figuring out how to maximize credit card sign-up bonuses, finding airline loopholes, and skirting rules and limitations to accrue the bonus miles necessary to book the trip. Huang noted that until recently, Alaska Airlines didn't have a set limit on rewards bonuses or routing restrictions, which made his amazing feat possible.

Once Huang had accrued enough points, he set to work booking his around-the-world ticket. While Alaska Airline's previously out-of-date computers simply saw a flight from Singapore to New York, Huang had actually booked a first-class country-hopping excursion complete with 24-hour layovers that spanned about three weeks.

Since Huang's stunt, Alaska Airlines has revised its policies. But that hasn't stopped Huang from taking advantage of other frequent flyer mile bonuses to jet around the world in style. He's also flown first class on Cathay Pacific from Chicago to Hong Kong for $130 (a $10,000 value), and booked a flight from Sydney to the Maldives on the ultra luxurious Etihad Residence and Apartment for $104 (a $23,000 value).

So, would Huang ever dish out the full retail price to enjoy these first-class luxuries? "No way," he told Mashable. "I'm very cheap actually when it comes to revenue tickets – if I have to pay out of my own pocket I'll go right back to economy. I think we all know the price is a bit inflated because we know for the 1.0%, that's really nothing." Even if he wouldn't pay full price, Huang said his around-the-trip Emirates adventure was "by far the best flight I've ever taken."